RussiasyriaUSA
In the first decades after the fall of communism in Europe, tensions between American and Russian forces decreased significantly, making everyone feel safe and cozy.

To our knowledge (feel free to correct us if we are wrong), American and Russian armies were never very close to one another on the battlefield, including during proxy wars, and avoided close contact as much as possible. Until recently.

For a number of years now, the hottest place to be for warmongers is Syria. There's the Syrian army fighting the militias that oppose it, terrorist organizations that fight everybody, the Turkish army going against the Kurds, Russians backing the Syrian army, and Americans on the lookout for terrorist organizations. All are mixed to such a degree that possibly dangerous accidents are bound to happen.

The most dangerous mishap, one that could possibly have global consequences, is the Americans or Russians doing something stupid to one another. The former Cold War foes are already on the edge of their seats, harassing each other in the skies and seas of the world.

And now also on the road.

A video posted on Twitter by a user called Mohammad allegedly shows the moment when an American armored truck pushed off the road an equally armored, albeit smaller vehicle flying the flag of the Russian Federation.

As it can be seen on the images, the Russian Tigr car was leading a convoy of several military machines, when it caught up to the Americans. They appear to be trying to overtake, but are stopped in their tracks by the American M-ATV blocking their path.

When the Russians move to overtake on the other side of the road, the Americans push them, car and all, into a ditch, with a civilian avoiding to be crushed.

Mohammad does not say when or where the incident took place. We also do not know what happened after the initial incident. 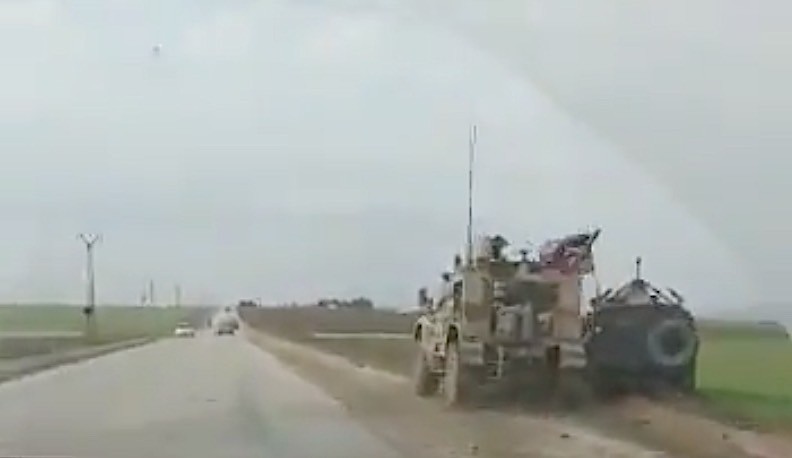