Brabus has been making supersedans out of Mercedes-Benz four-doors since 1996 when it introduced the first E V12 that could only go 330 km/h.

With each successive sedan, the German tuner managed to inch that top speed ever higher until recently when it claimed a top speed of 230 mph for the latest E V12based on the current generation E-Class. As it goes with the standard cars, whatever the E-Class gets can't be far behind for the CLS-Class. And so Brabus has introduced its second CLS-based super saloon, the Rocket 800, at this year's Frankfurt Motor Show sporting the same mechanicals as the latest E V12.

What that means is stuffing a twin-turbocharged (or biturbo, as the Europeans call it) version of the V12 engine that Mercedes uses in its 600-Series cars into the welcoming bay of a CLS. The monster motor has had its capacity increased from 5.5 liters to a more a generous 6.3, which helps it produce the car's namesake 800 horsepower. Torque is also up to a claimed maximum of 1,047 pound-feet that's electronically limited to 811 lb-ft, which we presume is to prevent the powertrain from annihilating itself. Backed by a seven-speed automatic, Brabus' own limited-slip diff and a range of final drive ratios, the Rocket 800 can reach an ultimate speed of more than 370 km/h in certain configuration, but is limited to just 350 km/h for on-road excursions. 0-100 km/h happens in just 3.7 seconds.

Of course, to be a Brabus you have to look the part, and the Rocket 800's exterior is adorned with all manner of carbon fiber filigree that performs the very real task of directing air where it needs to go (either into the engine or across a spoiler to keep the car planted). It looks suitably more menacing than a standard CLS or even the AMG model, but not so garish that you wouldn't want to be seen in one – something we haven't always been able to say about Brabus products. 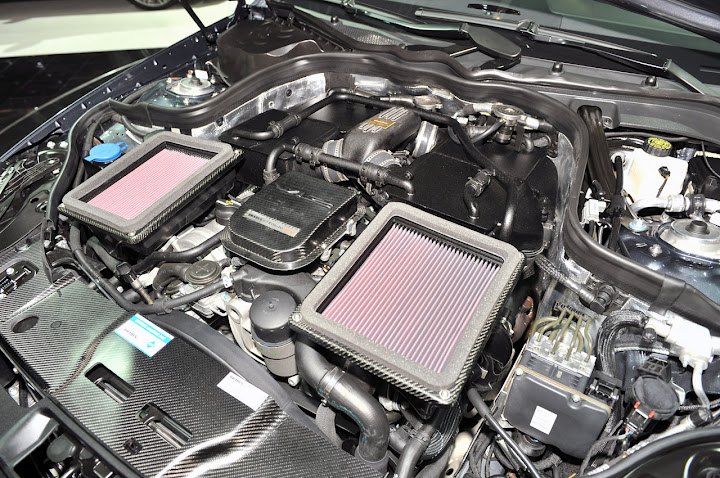