It wasn’t all about Supercars at Paris. Many manufacturers also presented concept version of their future cars and future technologies for the masses to see. Here is a roundup of all the interesting concepts that caught our eye. 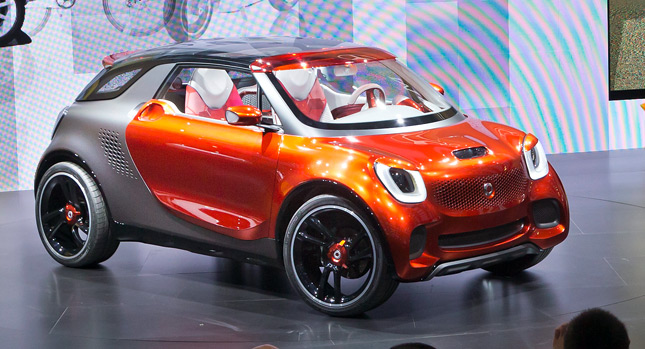 No this isn’t a Smart car for Justin Bieber. The Smart Forstars Concept is designed to give you a clear view of the starry sky. Not interested in stars? You can have your own private movie screening thanks to a projector located in the front scoop of the bonnet.

The Smart Forstars Concept is a two seater SUC (Sports Utility Coupé) powered by an electric motor positioned on the rear axle. The electric motor gets its juice from a 17.6 kWh lithium-ion battery. Future Smart Fortwo models will be heavily inspired by this new concept. 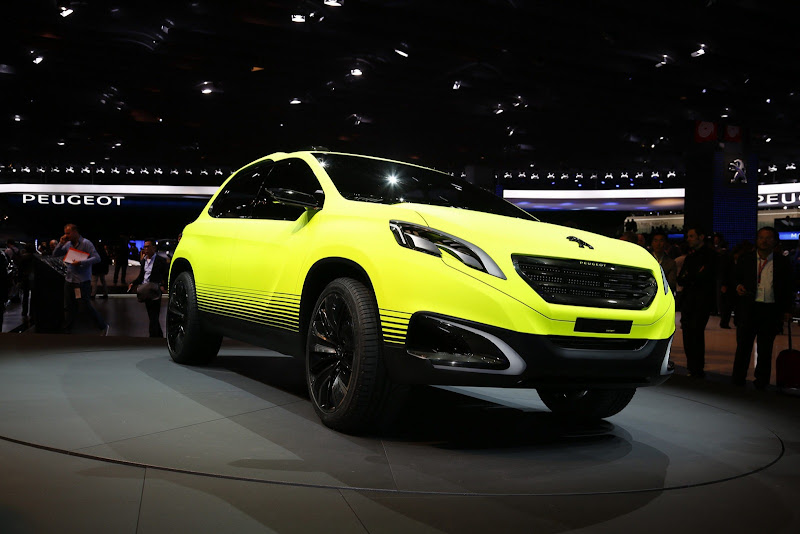 The 2008 Soft-Roader Concept is a follow-up to the ‘Urban Crossover Concept’ that was showcased at the Beijing Motor Show. The concept is 4.14m long and 1.74m wide. Under the hood, you will find a tiny 1.2L, three cylinder petrol engine generating 110 horsepower. Special attention has been given to reduce carbon emission

The production version will compete against the Skoda Yeti and the Nissan Juke, and should be ready by 2013. 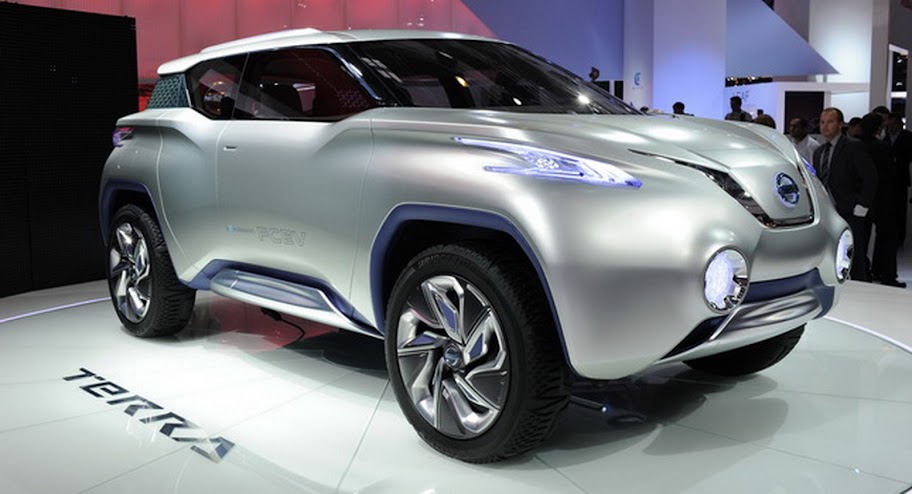 The Nissan Terra showcases Nissan’s upcoming zero-emissions technology. The Terra is powered by a same technology of the Nissan leaf on the front axle. At the rear, each back wheel incorporates an electric motor providing all-wheel drive on demand.

Unlike the Nissan Leaf, the Terra is powered by a compact hydrogen fuel cell stack that powers all three motors. On the inside, the Terra has a detachable electronic tablet to replace the traditional instrument cluster. 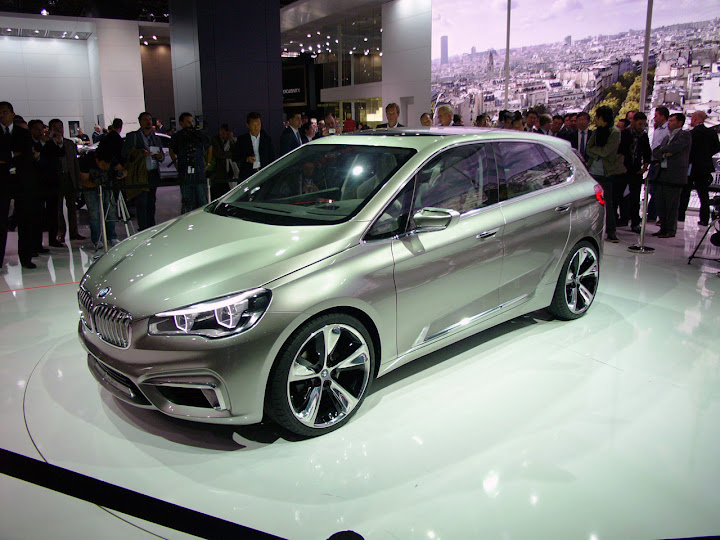 BMW’s Active Tourer Concept is BMW’s first ever front wheel drive car. It is powered by BMW’s eDrive hybrid system which mates a 1.5-liter turbocharged three-cylinder petrol engine that drives the front wheels with an electric motor that powers the rear axle. The electric motor is powered by an a lithium-ion battery pack that can be charged using a regular socket.

The car can be solely driven on electricity for a range of more than 30 km. The production model will be called the BMW 1 Series GT and it will be powered by BMW’s new TwinPower family of engines. 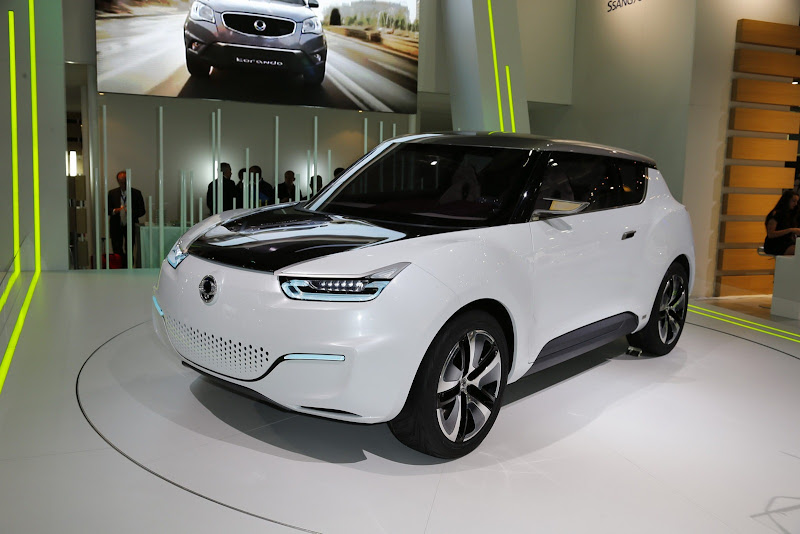 Ssangyong presented electric-exciting user-interface vehicle (e-XIV). It is a future B segment crossover targeted towards the younger audience. It is powered by an electric motor equipped with a range-extender hybrid powertrain. A small petrol engine recharges the batteries when they run out of juice.

Ssangyong has promised that they will put the XIV series in production very soon, but it has yet to announce a fixed date. 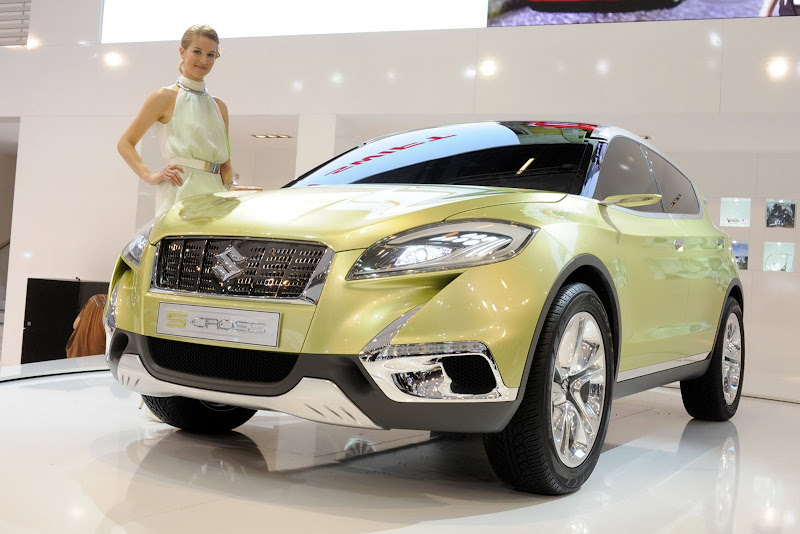 The Suzuki S-Cross Concept envisions Suzuki’s dream to enter the compact SUV segment. The S-Cross is a C-segment crossover that is 160mm longer, 85mm wider and 20mm lower than the AWD version of the Suzuki SX4.

Suzuki isn’t clear whether the S Cross will replace the SX4 or will sit under it. Do note that Maruti Suzuki also has plans to put the XA Alpha in production very soon. No mechanical details are available but Suzuki has mentioned that the production model will be the lowest CO2 emissions in the C-segment of crossover cars. 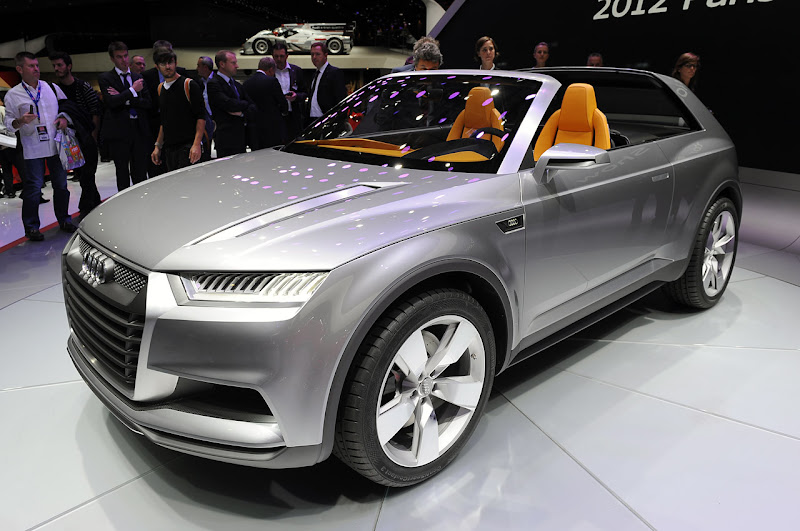 Audi has lifted the sheet on its newest concept car at the Paris Motor Show, a vehicle called the Crosslane Coupe Concept that hits just about every concept car meme that we know of. The angular Audi is, at once a coupe, a convertible and a crossover; it is a two-seater and a 2+2, it has a hybrid powertrain with a small, efficient gasoline engine and no less than two electric motors; the whole structure is made from advanced materials.

The coupe concept is powered by a combination of a 1.5-liter three-cylinder engine, a smaller electric motor that acts primarily as a starter and alternator and a second electric motor that adds quick to the Audi's giddy-up. Total system power averages out to 176 horsepower, giving the vehicle a 0-100 sprint of 8.6 seconds and a top speed of 181 km per hour. 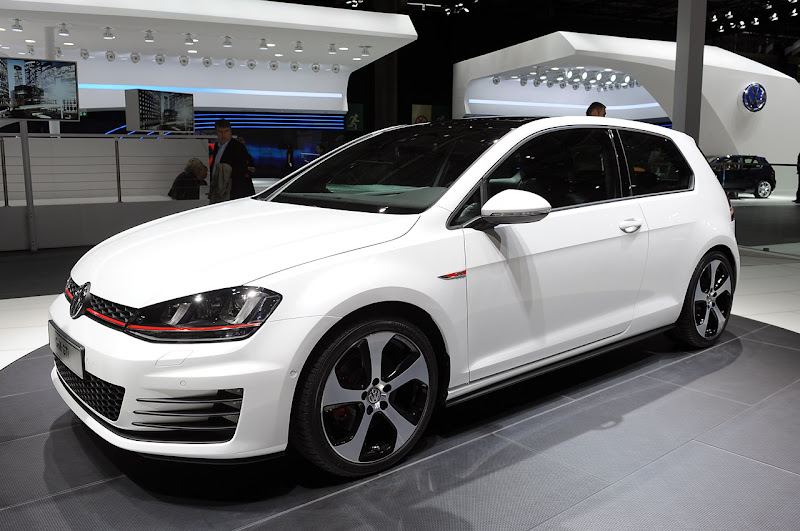 The German automaker showed off its GTI Concept alongside a smattering of other Golf variants.

A prototype in name only, the concept gives us a glimpse of what the MkVII GTI will bring to the table in terms of aesthetics. Volkswagen says the next-gen GTI will boast an 18-percent bump in fuel efficiency, which could see the sports hatch top 6,5 L/100km. Not too shabby, especially given the machine should retain its turbocharged 2.0-liter four-cylinder engine.

Volkswagen has also rummaged up a few extra ponies, as the company claims the MkVII will dish out around 217 horsepower, a 17-horse nudge over the current generation. 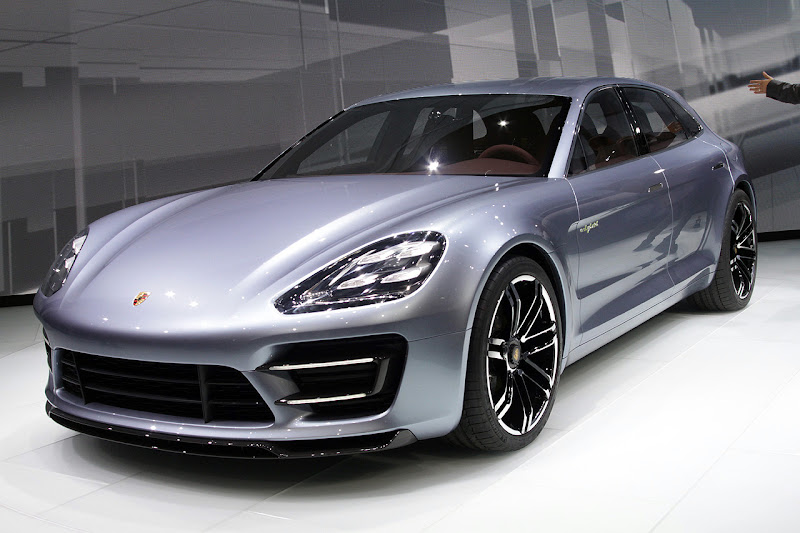 Powered by an evolution of Porsche's current hybrid system used in the Panamera S Hybrid, the Sport Turismo Concept's new "e-hybrid" system uses the 333-horsepower, supercharged 3.0-liter V6 and a 95-hp electric motor for 416 combined horses and a 30-kilometer electric range. Unlike the current production system, this e-hybrid setup prioritizes all-electric motivation unless the driver instructs the car otherwise. Interestingly, the Sport Turismo is technically a plug-in hybrid, as the lithium-ion pack can be charged in as little as 2.5 hours when plugged into a wall outlet. Porsche says the combined powertrain is good for a 0-100 km/h time in under six seconds, and the Sport Turismo can exceed 130 km/h purely on electric power. 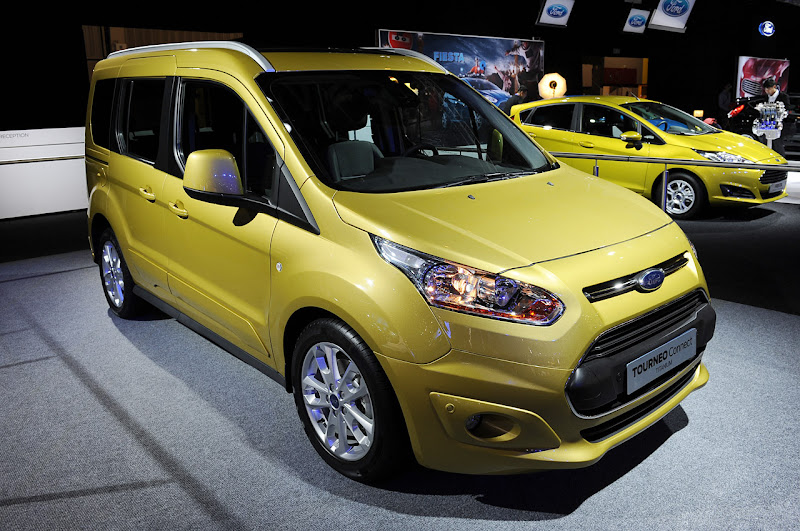 Much as we like the current Ford Transit Connect, "sexy" is not an adjective we'd use to describe it. And while this new 2014 model appears a bit bulgier in person than the original stock photos led us to believe, it's no doubt a wholly more stylish van than the vehicle it replaces.

Unfortunately, details are slim regarding the new Transit Connect. 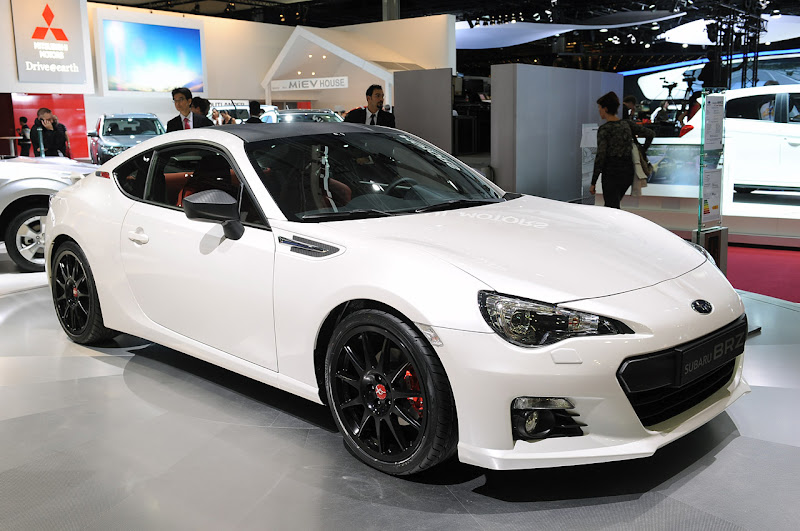 The Subaru XT was a small coupe from the '80s that offered all-wheel drive and a turbo engine, and now, Subaru is revisiting the designation on its 2012 BRZ XT Line Concept. While we would love to imagine a day with a turbocharged Subaru BRZ driven by all four wheels, we'll have to wait until later to learn the true details of this car. The XT moniker has also been used more recently to denote the turbocharged models of the Subaru Forester, so there's that, too.

For now, though, all we have to work on are pictures of the car, and from what we can tell, Subaru's definitely injecting more attitude into the much-loved rear-drive coupe. Visual changes include carbon fiber (or at least a carbon fiber look) on the roof panel, decklid spoiler and mirror caps, while the blacked-out 11-spoke wheels expose red-painted calipers at all four corners. XT Line Concept badges adorn the front fascia, fender vents and the C-pillars. 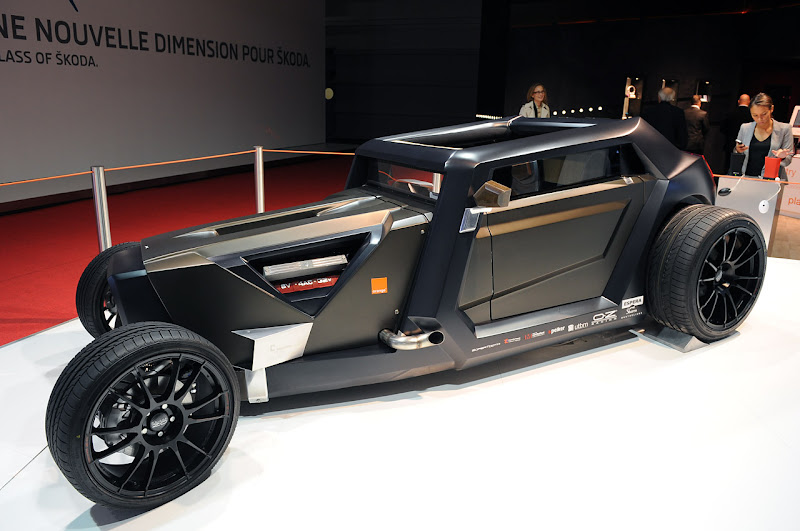 Here's a showstopper. Tucked away in a corner of the Fourth Pavilion here at the 2012 Paris Motor Show was this carbon fiber hot rod from the Espera Sbarro Montbéliard School of Design. Known simply as the Eight, cribbed from the Maserati-sourced V8 engine, this machine was reportedly designed and built in just eight weeks. We also hear that it's powered by the impure thoughts of heathens, or maybe just gasoline.

The Sbarro Eight Concept was built to help showcase some of the latest technology available to automakers, including a driver-facing tablet computer that occupies the spot normally housing the dash. Applications such as navigation, internet, and Read & Go for books, Liveradio and Deezer for tunes and Cinéday for movies keep the driver connected while on the go. But hopefully not while actually, you know, driving.

The Eight also features a Parrot Asteroid Smart car radio powered by Android that features a 6.2-inch screen and can connect to the online Asteroid Market, cellular phones via Bluetooth, or display videos through auxilliary inputs. An onboard wireless charger and a mobile stereo system round out the tech package.

Though we truly love its distinctive style, this pony has the go to back up its considerable show. The aforementioned V8 engine spins out 360 horsepower to the rear wheels. 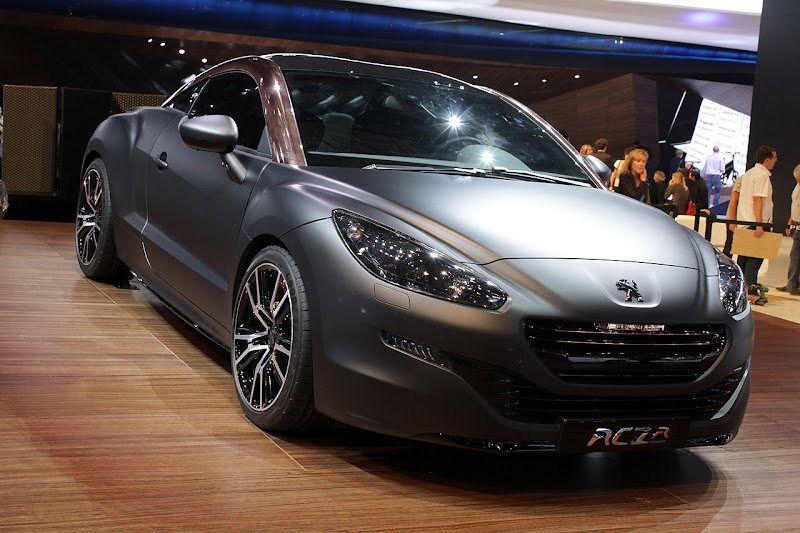 Say one thing for Peugeot at its home Paris Motor Show this season: the company knows how to run with a theme. Peugeot, some might argue, stole the 2012 show with its Onyx supercar concept; that car has an Onyx Scooter Concept that matches it in livery (if not performance). But, perhaps the most realistic vehicle to wear the matte black and copper attire is this hotted-up RCZ R Concept.

Now, don't let that "Concept" bit on the end of the formal name fool you too much – the company out and out says that the RCZ R will show up as a production model at the end of 2013. 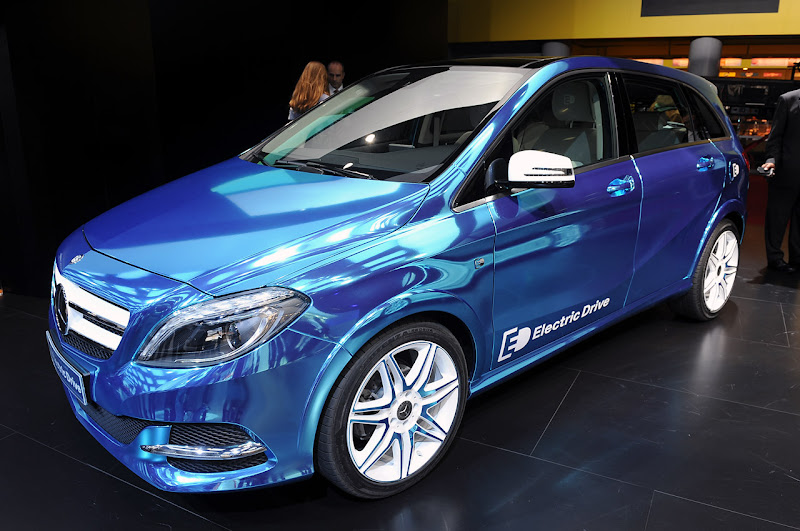 Mercedes-Benz showed off a number of alternative fuel B-Class models at the 2012 Paris Motor Show, including the B200 Natural Gas Drive and this machine, the B-Class Electric Drive. Using a 100-kilowatt (134-horsepower) electric motor, the hatch can whir to a top speed of 150 km/h and boasts a range of around 200 km/h, though presumably not at the same time.

The motor delivers a total of 229 pound-feet of torque, and while Mercedes-Benz isn't disclosing the lithium-ion battery's capacity, the company has said it will be chargeable through any 230-volt outlet. 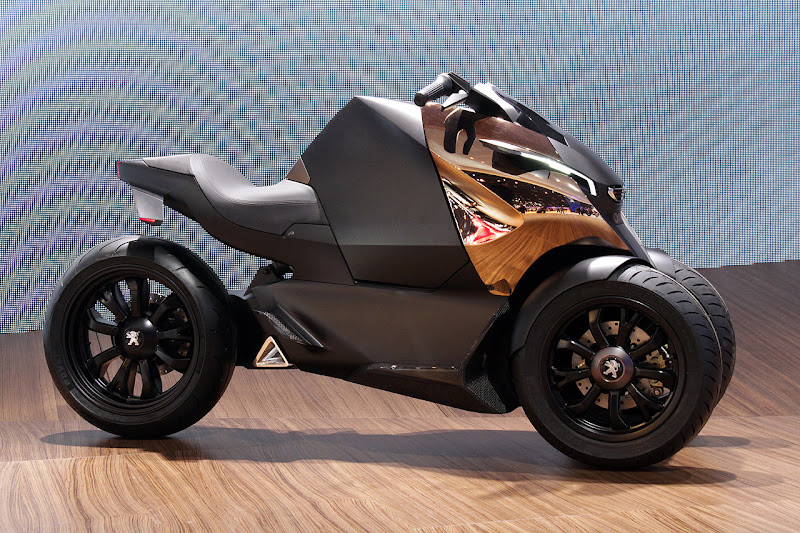 Peugeot is referring to its Onyx Concept Scooter as a two-in-one supertrike. Seems fitting. Not only can this innovative hybrid three-wheeler hit a top speed of 150 km per hour, its 400cc engine and electric motor combination offers up 60 horsepower (45 kilowatts) and 42 pound-feet of torque, which should be plenty of gumption for quick getaways from traffic.