Europe up against Asian juggernaut in $290B electric car battery market

Chinese electric vehicle giant BYD is looking at launching battery production in Europe, joining Asian rivals aiming to cash in on a green car revolution and threatening attempts by Brussels to nurture a home-grown industry.

Keen to capture a European car battery value chain that will be worth an estimated 250 billion euros ($290 billion) by 2025, the European Commission launched an alliance of local companies last year aiming to build 10-20 huge battery factories.

But only Sweden's Northvolt has plans for large lithium-ion battery factories in Europe so far, and some leading European carmakers have already struck deals with Asian suppliers setting up in Hungary and Poland.

"We are considering cell production outside of China and that includes Europe," Julia Chen, Global Sales Director at BYD Batteries, told Reuters, speaking about the production of both automotive and home storage batteries.

BYD, which also makes electric buses, cars and solar panels, said it was not clear where in Europe a battery site might be. "It would be possible wherever there's a market."

South Korea's LG and Samsung both have European factories due to open soon, while China's GSR Capital already produces battery cells at a UK plant it bought from Nissan.

While Asian electric vehicle (EV) battery factories in Europe would bring jobs, Brussels is concerned companies in the bloc are missing out on a growth industry and risk becoming dependent on foreign technology.

"We have to move fast, because here we are in a global race. We need to prevent technological dependence on competitors," European Commission Vice President Maros Sefcovic said at the launch of the European Battery Alliance's action plan in May.

But some investors say they are wary of backing European EV battery suppliers after seeing local solar panel firms founder in the face of cheap Chinese imports over the past decade.

European battery companies would need billions in EU support to rival Asian firms that have received similar state subsidies and Brussels may be better off promoting next-generation solid-state EV batteries instead, investors say.

"I don't believe anyone in Europe can be competitive with the Asians," said Gerard Reid, founder of Alexa Capital, which advises firms in the energy, technology and power infrastructure sectors. 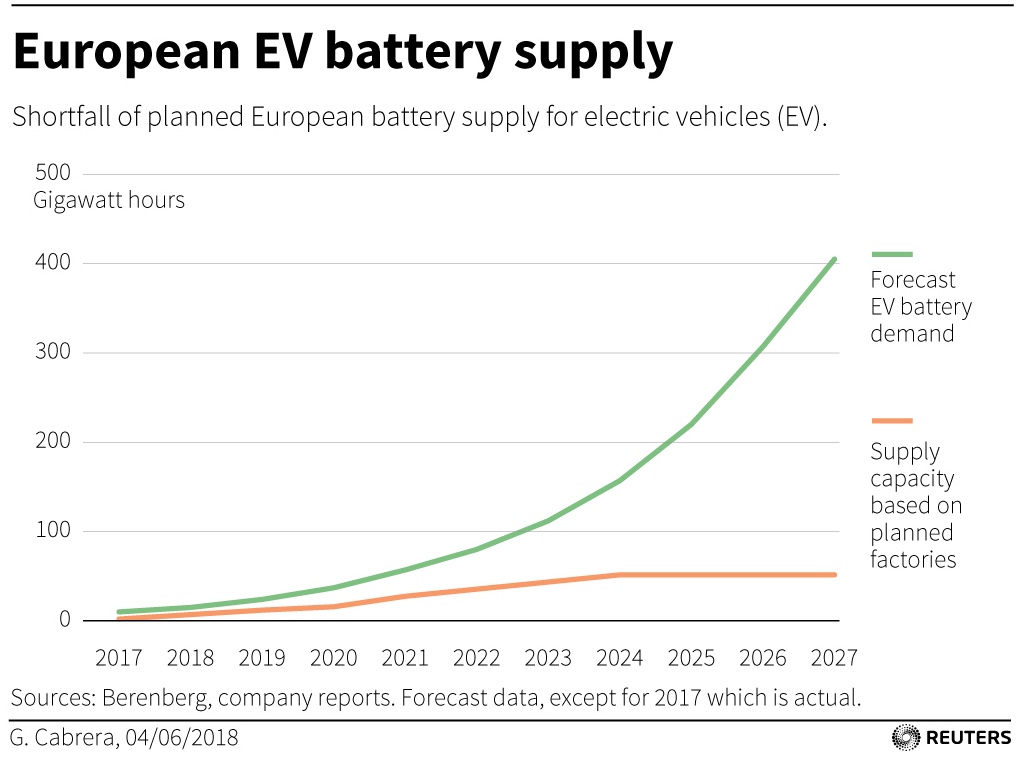 Electric and hybrid vehicles are expected to account for 30 percent of the global auto market by 2030, according to metal consultants CRU, up from 4 percent of the 86 million vehicles sold last year.

Global automakers plan to invest at least $90 billion in electric cars and batteries, the most expensive component in the vehicles, to finance hundreds of new models over the next five years.

For now, carmakers in Europe have been importing batteries from Asia, but as production ramps up that will become less viable. Setting up production in Europe would cut shipping costs by a quarter, consultancy P3 Group.

But some carmakers are not waiting for a European industry, instead signing contracts with Asian firms coming to the region.

German's BMW said it was not involved in the European alliance while Europe's biggest automaker, Volkswagen, said it plans to get batteries from LG Chem's Polish factory due to open this year. Mercedes maker Daimler has awarded a contract to CATL.

The European Commission's plan calls for 110 million euros in battery related research, help for projects from a 2.7 billion euro EU innovation fund and the development of an EU "green battery" trademark.

Supporters of the initiative argue Europe can carve out a niche by selling green batteries produced with renewable energy and ethically sourced raw materials.

Northvolt, which has held talks with European automakers, aims to launch its $5 billion gigafactory in late 2020 and produce 32 gigawatt hours of battery capacity each year by 2023.

But investors have been cautious about pouring money into new European battery ventures.

In the end, the bulk of the financing was provided by the Swedish Energy Agency and the European Investment Bank, which provided a loan of up to 52.5 million euros.

Much of the profit from the battery value chain is generated by producers of raw materials, such as cobalt and lithium, and those who assemble cells into complex systems, experts say.

"There's been a bit of imbalance in that value chain and that's one of the reasons you see a limited amount of players in Europe," said Northvolt founder and Chief Executive Peter Carlsson. "But we think that the model that we're applying is changing this."

Carlsson, who used to work for U.S. electric car pioneer Tesla, says Northvolt can make a profit through economies of scale, by using cheap hydropower and controlling the processing of raw materials.

But Northvolt and TerraE will probably need about $2 billion each in government funding to build their gigafactories — given the state support provided for similar projects in Asia and the United States, said Asad Farid, an associate director at private bank Berenberg who specializes in battery technology.

Investors are wary because of their experience with solar panel manufacturers as well as rapid advances in technology that are slashing the price of battery packs, which consultants Arthur D puts at $190-250 per kilowatt hour now.

"In battery manufacturing ... it's very much about scale. So the established producers in Korea, China and Japan have clear advantages over new entrants," said Simon Webber, lead portfolio manager on the global & international equities team at Schroders .

"The attraction of the industry decreases as you move further down the value chain. Things like battery manufacturers and the battery pack assemblers, it's much more fragmented market with lower barriers to entry," said Crockford.

While Hermes has avoided companies mass-producing EV cell batteries it has taken stakes in a lithium producer and a company that makes materials for battery cathodes, he said.

The lithium-ion batteries used now are also likely to be overtaken in a matter of years by so-called solid-state technology that is expected to produce even cheaper batteries with higher energy density.

"The development cycle and the speed of technology progress in batteries is so huge at the moment, there's an opportunity for new and additional players to enter," said Timo Moeller, head of the McKinsey Center for Future Mobility overview in Cologne.

Developers in Europe believe that gives the region an opportunity to catch up.

"Everybody is developing solid-state batteries so the gap (with Asia) will be narrower and narrower as we go along," said Diego Pavia, CEO of InnoEnergy, a sustainable energy company that has invested in Northvolt.