GIRRAWEEN, Australia — In 1994 I lived in Surry Hills, a suburb of Sydney, Australia. Back then, Surry Hills was artsy, edgy, and most important, cheap. One day I looked out my bedroom window and saw, parked in front of an office, a dark gray coupe. This lead-hued peril lurked behind a passing stream of subcompacts, utes, and round-edged Holden Commodores and Ford Falcons like a barracuda among the cast of "Finding Nemo." I had no idea what it was. I called my Australian roommate over to make a positive ID. He chuckled and said, "That? That's Godzilla," then walked away. I'd met the R32 Nissan Skyline GT-R — "Gran Turismo Racer."

Australia's Wheels magazine had christened the Skyline GT-R "Godzilla" in the July 1989 issue, after the Japanese had already taken to calling the car obakemono, meaning "monster." In 1990, Nissan Motorsport Australia (NMA) entered one of the all-wheel-drive, twin-turbo howlers in the Australian Touring Car Championship. The R32 won one race.

In 1991, two NMA Skyline GT-Rs torched the ATCC competition in 11 out of 12 races. The same year, Nissan chose Australia as the Skyline GT-R's first export market. "Win on Sunday" turned to crickets on Monday, as Godzilla languished on dealer lots. The Aussies weren't yet willing to pay $110,000 (AUD) for what Wheels called the Skyline GT-R's "very narrow application" and "extravagant consumption of resources." That was the end of manufacturer export to Oz. 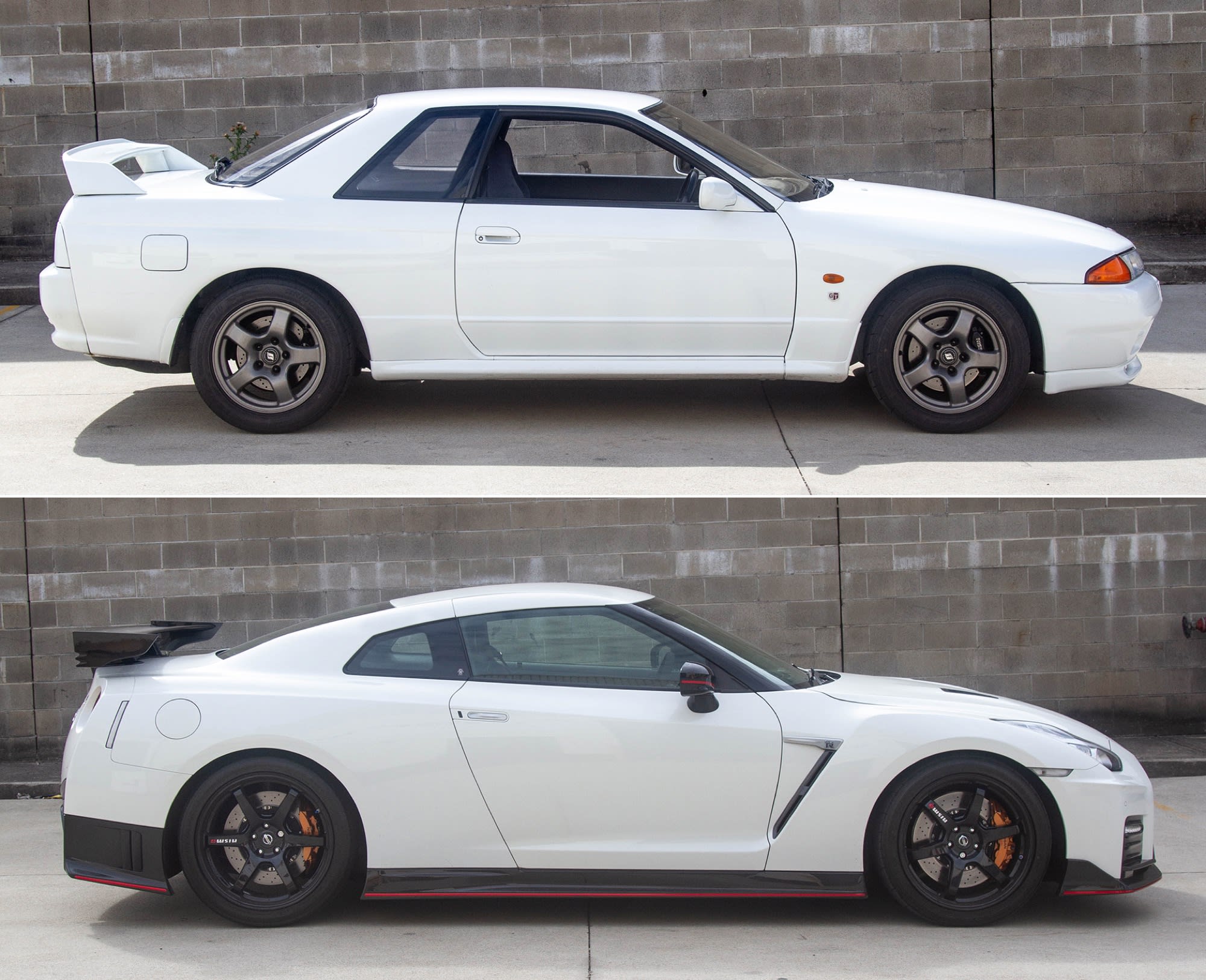 In 1992, two Winfield Racing Skyline GT-Rs claimed another ATCC one-two even though burdened with 309 pounds of balance-of-power ballast. At the end of 1992, fed up with the drubbing, the Confederation of Australian Motorsport (CAMS) banned the GT-R from the Australian Touring Car Championship — outlawing turbocharged and all-wheel-drive cars — laying the foundation for what would become the V8 Supercars series.

In 1993, Australian law made the Skyline GT-R legal for private import. Now with a better price and gobsmacking pedigree, Godzilla found willing buyers, like the gent who parked his gray example in front of my apartment 25 years ago.

The Skyline GT-R was a local legend by the time I saw it. In the years since, the car has become a video-game big boss, film star, getaway car, phoenix, and increasingly valuable collectible. That's why, on a visit to the antipodes last year, I wanted to drive the model that made that name. I'd also take the chance to drive the latest evolution, to see how larger, heavier, much more mature R35 GT-R felt on Aussie streets 25 years after its playing days ended. 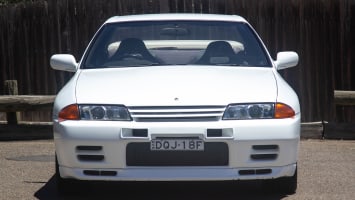 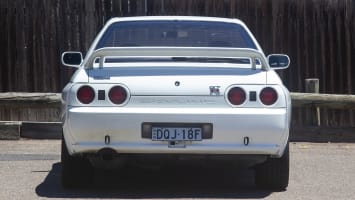 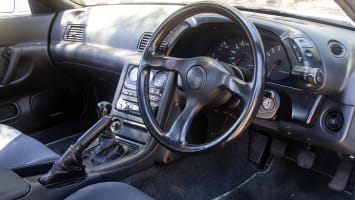 Australia has plenty of used Godzillas to go around. I found a 1993 model being sold by Tim Wilkins of SSS Automotive. The company, run by Wilkins and a partner, sells used spare parts for high-performance Japanese cars. The stock in that tiny wonderland included shelves of Silvia bumpers, a beehive of Subaru driveshafts, hoods stored like library books, and three GT-Rs stacked like scale models in a toy store, but at a scale of 1:1.

Australia mandates two changes to an imported GT-R for local compliance. The front turn signals can't be seen from the side, so owners need to install blinkers on the front fenders, then apply the drill to the rear shelf for ISOFIX child seat loops. Wilkins' only other change was installing an Australian stereo, because the Japanese unit won't pick up Oceania frequencies.

The R32 eschews the superfluous, its three-box form derived from a design brief labeled "Menacing Rectangle." It achieves separation from its T-square origins by little more than a fast backlight and bulging fenders, and they are enough. There's no character line or detail to stop one's eye sweeping front to rear, but stand back from it, and the whole body makes a stout impression. 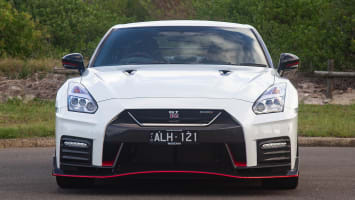 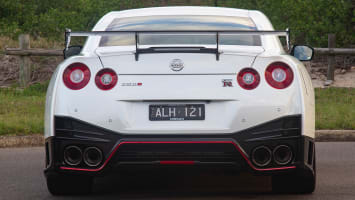 The metallic pearl R35 GT-R Nismo I drove to Wilkins's shop banishes both the rococo and the R32's boxy profile, adopting a ridiculously wide wedge shape but little else for the eye to obsess over. In spite of that, park the R32 next to the R35, and the acolyte might not realize they are two versions of the same model. The R35's size, muscle and integration obscure the heritage.

Looking closer, it's clear the R35 wears stylized versions of R32 identifiers. The front bumper bisects upper and lower intakes on both cars, but as ornament on the R35. The outer intakes on the R32 have become a trio of fillips on the R35 (just changed on the 2019 model). The two do have a rear wing in common — again, note the size gap — but below that they diverge. The R32 hauls a substantial trunk fitted with one-size-fits-all taillights. The R35 gets four artillery barrels for exhausts, the single R32 pipe could have come from a Maxima.

The interiors present more likenesses, despite the hum of Guns N' Roses and Color Me Badd in the R32 cabin. Three-spoke steering wheels with thin rims. Deep instrument binnacles with buttons along their flanks. Speedometers to the left of tachometers. Round vents, with similar motifs, between the steering wheels and the driver's doors. Even the shifters and handbrakes maintain their relative positions, and both coupes feature the same cubby next to the handbrake. Seats are stitched with the same bolster patterns, and get holes between the seatbacks and headrests. When Nissan  designers went back to the drawing board for the R35, they took a few sheets of tracing paper with them.

Some Skyline features evolved out of existence, like the front torque gauge in the dash cluster, the four supplementary gauges in the center console, and the five-speed manual transmission. Other features simply evolved, like the 180-km/h speedo, representing a top speed of 112 miles per hour. The R35 inverts that number, topping out at an indicated 211 mph.

The Skyline's 2.6-liter twin-turbo straight-six ran to a claimed 276 horsepower due to the gentleman's agreement between Japanese carmakers at the time. Real output is closer to 320 hp, according to some, and 260 pound-feet of torque. That twist and shake moved 3,150 pounds through the Skyline's Advanced Total Traction Engineering System for All-Electronic Torque Split (ATTESA E-TS) all-wheel drive, putting double-edged grip on the Skyline's combo of power and handling. The system was similar to the one developed for the Porsche 959, but apportioned torque differently in order to eliminate understeer.

Nothing happens in the Skyline under 2,000 rpm. Around town, there are econo-car sounds and a cushy ride on the 225/50 R 16 Bridgestone Potenza R003s. It's all the anti-excitement of a contemporaneous Altima. But Giraween, the suburb where I drove, maintains a bunch of long straights and, among its side roads, tons of roundabouts. You don't need a track to get a good idea of what the Skyline can do.

Floor the throttle, and urge builds between 2,000 and 4,500 rpm, then the whole package turns on. The shifter slides through a closely-spaced gate with positive action and long throws, although I had to move the seat forward to deal with the clutch's extended travel. Aim down a highway on-ramp and it's a swift run to fifth, the tach needle wagging between 5,000 rpm and the 7,500-rpm redline. Compared to a modern car, the Skyline feels so light and so supple even in a straight line, like driving a seat and a few body panels with a giant engine.

Fling the Skyline into a roundabout and stay on it, and the whole back end fights to come around, rear tires stuttering to satisfy the steering angle. The wet multi-plate, electro-hydraulic clutches can transfer up to 50 percent of the torque to the front wheels, but Nissan engineers wanted to let the front tires focus on steering as much as possible, so the GT-R remains 100 percent rear-wheel drive until the rear tires get pushed beyond their pay grade. Demand a little more on each roundabout revolution, the chatter astern and a gently widening radius eventually register the limit of rubber and technology. That limit is impressive.

Corner exit was one of the R32's best tricks. Among the 10 vehicle inputs sent to the ATTESA E-TS system, a lateral G sensor restrains the torque sent forward so as to maximize lateral grip at the front contact patch. Open the steering and the Skyline's nose locks onto the line, squeeze the throttle to send the Skyline racing down the range. During all of it, Wilkins' 25-year-old, 60,000-mile car didn't betray a squeak or untoward shimmy.

Yet not even the movie Godzilla stands still. The first Godzilla in 1954 was 164 feet tall. That's so small that if he attacked Tokyo today, he'd be mistaken for a corporate mascot. The monster in 2016's "Shin Godzilla" was 388 feet tall, and the current Netflix Godzilla towers some unknown distance over that.

And the R35 GT-R Nismo weighs 3,911 pounds. The "R" in R32 could stand for "rangy;" in the R35 it stands for "rhino." The R35 looks big, feels big, cracks thunder even at its quietest, chases road grooves, crushes speedbumps, crashes into potholes. The analog speedo is impossible to read, so many numbers and hash marks crowded into a small circle. The transaxle clunks through gears like a factory press. Additional bonding and welding make the Nismo's body stiffer than the standard car's, so subtle rumble strips along a road's center line get the cabin roaring; mean rumble strips on the shoulder jiggle the coupe like a tuning fork; unpleasant oscillations shoot straight up the seatback. Aero effects that generate an extra 220 pounds of downforce at 185 mph yank detritus off the road at legal speeds, flinging projectiles onto the flat undertray. Stray off the clean line and it sounds like being inside a Dirt Devil.

None of those are faults. The GT-R Nismo is the anti-Altima: a ruthless, relentless machine. Its limits are so far over the rainbow that you can't get close to them on any public lane. The coupe runs through the same three acceleration stages as the R32, but 2,500 and 4,500 rpm come so much faster. I got my biggest chuckle on wily B-roads between Woollongong and Bega, cruise control set at the speed limit even through every tight snaking ess and decreasing-radius 180. I'd like a seventh gear for highway cruising, but ... race car.

Rip through a roundabout and the whole back end doesn't stutter. Rather, it feels like the outside rear tire takes all responsibility for maintaining the coupe's attitude. And I've never driven a car with such abrupt corner response to more throttle. When the backside starts to slip, a harder go on the accelerator twists the whole vehicle, snapping the rear around.

Driving the R32 Skyline GT-R and the R35 GT-R back-to-back demonstrates ample family ties. The difference: The R32 is easy, fun excellence, while the R35 is monstrously good. The 320-hp R32 Skyline GT-R — and its five-speed manual — begs for driving involvement in return for pliant, dazzling performance that doesn't require a closed course nor immense fortitude to explore.

The 592-hp R35 GT-R Nismo demolishes the R32 in every measurable and perceived metric. It's so quick, fast, big and capable that you'll break every law of the road and challenge several laws of physics before the end of third gear. As with the modern movie Godzilla, the R35 Nismo has outgrown our surface streets. Forget about a casual frolic, because you won't have real fun in the R35 Nismo until you're afraid of it. By the time you get the R35 to roar, you've astral-projected.

I really liked both GT-Rs, but I'll take too much fun over too much thunder. If I'm adopting a Godzilla at the stray monster shelter, give me the little guy. He breathes the perfect kind of four-wheeled fire.