Maruti Suzuki S-Presso Officially Revealed Ahead Of Its Launch The new Maruti Suzuki S-Presso is based on the Future-S concept and gets an SUV-inspired design like - a tall stance, high ground clearance, beefy bumpers and underbody cladding among more.

Maruti Suzuki India has officially revealed its upcoming mini SUV, the S-Presso, ahead of the car's launch. Slated to go on sales in India on September 30, we have already seen several spy photos and leaked images of the new Maruti Suzuki S-Presso, however, these are the official images of the upcoming Renault Kwid rival. The new S-Presso is based on the Future-S concept and the overall design character is inspired by SUVs like - the tall stance, high ground clearance, beefy bumpers, and underbody cladding.

Upfront, the new Maruti Suzuki S-Presso comes with chrome hexagonal elements on the grille which reminds us of the Mahindra Imperio. The grille is, of course, flanked by a pair of new wraparound headlamps, with separate chambers for headlights and indicators. Then you have the large, muscular grille with bold muscular lines that give it a chiselled look, while the lower half is made of black cladding adding to its SUV styling. The bumper also housed a pair of small, horizontal foglamps in black housings.

Towards the sides, the car comes with flared wheel arches, a sleek pair of ORVMs, black side skirts, and 14-inch steel wheels with hubcaps. The rear section comes with a neat design, featuring a pair of stylish horizontal taillamps, with a chiselled housing for the reflectors and a beefy, cladded rear bumper. The latest images also indicate that the car will come with substantial boot space for its size. In terms of dimensions, the new Maruti Suzuki S-Presso will measure 3665 mm in length and 1520 mm in width and a 2380 mm long wheelbase. Also, the car will come in 2 wheel sizes, 13-inch and 14-inch, and thus come with two height options as well - 1549 mm and 1564 mm respectively.

As for the cabin, this is the first time that we are seeing the S-Presso's interior, and we have to say it looks quite interesting. We see a MINI-inspired dashboard, with black base colour and body-coloured bezels for the air-con vents and the infotainment area, which features the Smartplay Studio, offering Apple CarPlay and Android Auto. The instrument cluster is also positioned at the centre, which too is a digital unit, and will be a more neutral position for both right-hand-drive and left-hand-drive markets. Below we see the air-con system, which appears to be a manual unit and a set of USB and 12V charging sockets.

The steering too looks pretty decent and comes with mounted audio controls and toggles for telephony. Also, the car only gets manual controls for the ORVMs, but front power windows and power steering are likely to be a part of the package, the rear passengers will have to do with a lever to roll down the windows. Furthermore, the car in the images is the AMT variant of the S-Presso, featuring the company's AGS (Auto Gear Shift) technology. Whereas, on the safety front, we see that it gets dual airbags and three-point seatbelts of four passengers and a two-point hip seatbelt for the rear middle passenger. Other safety features that will be offered as standard will include - ABS with ABD, rear parking sensors, driver seatbelt reminders, and high-speed alert.

The Maruti Suzuki S-Presso will get the Alto K10's Bharat Stage VI (BS6) compliant 998 cc three-cylinder petrol engine that is tuned to churn out 67 bhp at 5500 rpm and 90 Nm of peak torque at 3,500 rpm. The engine will come mated to a 5-speed manual gearbox and a 5-speed AGS (Auto Gear Shift) or AMT (Automated Manual Transmission Unit). 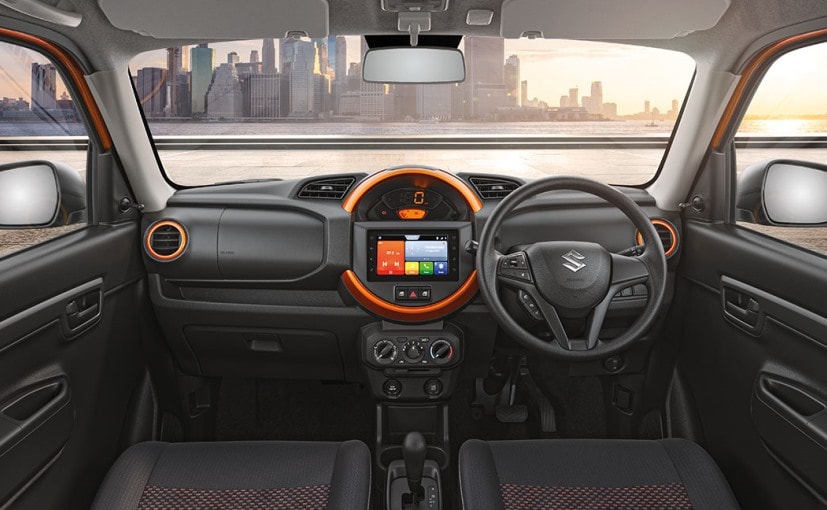