Averaging $10 million apiece, these are the most sought-after cars of the year.

With auction houses now closed for 2012, we can bring you the top 5 car auction of the year. RM Auctions and Gooding managed the sales, which incidently all took place in Monterey on the weekend of 18/19 August with over $50 million paid for this quintet of sought-after automobiles. While some readers may be repulsed by extremely expensive cars, it's time to accept certain collector cars are recognized as having the same intrinsic value as a rare work of art. They may not reach the quarter-billion-dollar mark a Cezanne recently fetched, but for some collectors they are just as important.

#5: 1955 Ferrari 410 S Berlinetta, sold for $8,250,000 at RM Auctions Monterey in August. There was plenty of interest in the 410 Sport Berlinetta when it crossed the auction block, not only for its one-off Scaglietti Berlinetta coachwork and monster 340-horsepower 4.9-liter V12 Superamerica engine, but because one hadn't hit the market for a decade, and was perhaps investors' last chance to add the ultra-rare Prancing Horse to their collection.

#4: 1962 Ferrari 250 GT SWB California Spyder, sold for $8,580,000, at RM Auctions Monterey in August. One of just 100 examples made between 1958 and 1963 (and one of just 37 short-wheelbase versions with the coveted covered headlights), this Pininfarina-designed, Scaglietti-coachbuilt California Spyder is arguably the most sought-after convertible in the world. Ferris Bueller had some fun driving one on his day off, and we hope this Pebble Beach Concours d'Elegance class winner will give its new owner an equally good time.

#3: 1968 Ford GT40 Gulf/Mirage Coupe, sold for $11,000,000 at RM Monterey in August. It's only fitting that, sanwhiched between 60s Ferraris is a GT40, the car which Ford built to beat Ferrari in European sportscar racing. Original GT40s always carry hefty price tags, especially one used as the camera car for the classic Steve McQueen film "Le Mans" and that won at Spa in 1967. This was also the first win for any car wearing the iconic powder blue and marigold Gulf livery.

#2: 1960 Ferrari 250 GT California LWB Competizione Spyder, sold for $11,275,000, at Gooding Monterey in August. Another California Spyder and another extremely rare model. A long-wheelbase model built by Scaglietti with a TR engine and an alloy body with old-style covered headlamps, this ultra-rare model was also built only nine times for competition. This LWB California Spyder came from the Sherman M. Wolf collection where it had been since 1979 and was last sold publicly in 1962. 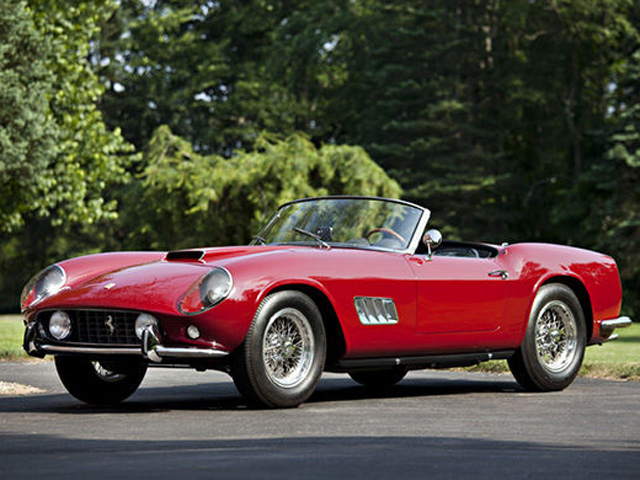 #1: 1936 Mercedes-Benz 540K Special Roadster, sold for $11,770,000, at Gooding Monterey in August. Having set multiple records at auction, the 540K Special Roadster is the most expensive Mercedes of all time, or indeed any German car, and it represents the absolute height of the brand at the forefront of both engineering and luxury. These were exclusive at the time they were built, with only 26 made, selling for $12,000 (about $187,000 today) when new, and only three are known to exist today.