Period advertising can be entertaining.

The ads are often graphically interesting and it’s also kind of educational to read the copy. At the least they are historical artifacts, a window into the commercial mind of a different era. For the long Fourth of July holiday weekend we posted a piece on the Liberty Motor Car Company, including the above ad. It was published sometime between 1916 and 1923, when Liberty went out of business. While reading the ad copy, I came across the following phrase:

“How about safety, in these days of women drivers and crowded traffic? Did you ever see an emergency brake applied with a touch of one finger that will stop a car without shock at full speed – surely – smoothly – safely. Try the Liberty emergency – and try it where life might depend on its action.“

At first my reaction was “women drivers”? “How quaint and patronizing and sexist”, went through my head, which is rather funny considering that I’ve been called a troglodytic misogynist, being terribly allergic to any form of PC thought. Women have always been in charge, they give the next generation much of their values in every society that ever has been, and ever will be. I am, though, a father of two daughters and a granddaughter and I want them to be able to pursue whatever opportunities their talent and hard work might merit. I personally have nothing against women drivers, I taught my older daughter (and her mother, too) how to drive a stick. Heck, my ex shifts smoother than I do and has a spotless driving record, which I can’t say for myself.

Then I thought, maybe the reference to women drivers was not disparaging but rather appealing to protective impulses. That’s a theme common in a lot of recent commercials, and some not so recent. There’s the Subaru ad with the dad talking to a little girl playing behind the wheel of their car sitting in their driveway who turns into a 16 year old about to drive on her own for the first time.

To be honest, I’m not even sure if “woman driver” had become a pejorative by the time the ad was published. Liberty was in business from 1916 to 1923. It was a time of women’s suffrage. Women drivers like Alice Ramsey and Dorothy Levitt (who held land and water speed records and wrote what is probably the only book that gives both fashion advice and instructions on how to rebuild a carburetor) were world-famous years before the Liberty was on sale. By the time the Liberty was being made, Kettering (another one of those “dead white males” whose inventions helped liberate women) had developed the electric starter and women drivers were indeed becoming more common.

One of the Liberty’s selling features was ergonomics, the ad mentions how just a “touch” is needed at the controls. Note how the text that I’ve quoted says that with “touch of one finger” on the emergency brake the car can be brought to a complete halt safely (presumably to avoid an accident). Perhaps all that ergonomics and light touch was a selling point to women, implying that a driver didn’t need a man’s physical strength to drive the Liberty. 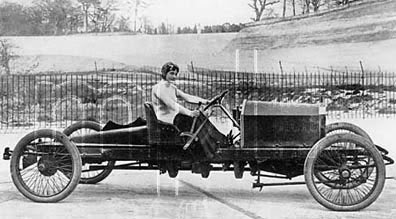 I’m not naive, and neither was whoever wrote the copy for this ad. Read it. It’s pretty sophisticated copy for an ad from not very long after Alfred Lasker more or less invented modern advertising. It’s possible Liberty was trying to have it both ways. They use the phrase “women drivers” but they don’t actually say anything disparaging. Maybe novelist L.P. Hartley’s famous opening line, “The past is a foreign country; they do things differently there,” applies. Maybe it really was patronizing and sexist, but I’ve seen enough period advertisements from that era that were pitching cars and car accessories to women to think that Liberty was perhaps being true to its name and was as eager to make money off of women drivers as it was from men.