The 2021 Ford Mustang Mach-E electric crossover has finally, officially been revealed. And yes, it's definitely called Mustang, and the company is leaning into that. It's the first time the nameplate has expanded beyond a traditional two-door car, it's the first "Mustang" to be electric, and it's the first to be offered with all-wheel drive.

And from the outside, though it may be a stretch for it to wear the same name, there is obvious Mustang influence to the Mach-E's bodywork. The bulging fenders, triple-bar taillights and scowling headlights fit the bill. But the faux grille is shaped more like Ford's other crossovers, and a hatchback roofline and four doors definitely break the illusion.

The interior, on the other hand, appears to be chasing Tesla. The dash is uncluttered and low, with the air vents hidden in a strip at the front. Dominating the middle is a massive 15.5-inch touchscreen that handles all infotainment and climate interactions and features a little physical knob floating on the surface not unlike what Jaguar Land Rover has used. Instruments get their own 10.2-inch screen right in front of the steering wheel. The interior features space for five people and 29 cubic feet of cargo space behind the rear seats. Fold the rear seats down for 59.6 cubic feet. The front trunk has space for 4.8 cubic feet of stuff, and it even has a drain so it can function as a cooler.

Under the crossover body is a surprisingly wide array of motor and battery combinations. The standard combination features a 75.7-kWh battery and rear-wheel drive from a single permanent magnet electric motor. That combination offers 255 horsepower and 306 pound-feet of torque and a range of 230 miles. All-wheel drive adds a second motor, increasing torque to 429 lb-ft and reducing range to 210 miles. Ford notes that the dual-motor all-wheel drive systems can quickly and dramatically adjust torque output front and rear for supposedly better handling, and probably better traction in inclement weather.

A long-range 98.8-kWh battery pack is available that, like the smaller one, uses a liquid system for temperature control. The bigger battery comes with more powerful motors, too. The rear-drive version comes with 282 horsepower and 306 lb-ft, and Ford says its EPA estimated range is "at least" 300 miles. The all-wheel-drive variant has an official 332 horsepower and 417 pound-feet of torque, and its range is 270 miles.

At the top of power heap are the Mustang Mach-E GT and GT Performance Edition. Both make 459 horsepower and 612 pound-feet of torque. The Performance Edition comes standard with magnetorheological suspension like what has impressed us in the company's high-end Mustang coupes and convertibles. Brembo brakes will be available as an option. Ford says the GT Performance Edition is aiming for a 0-to-60 time in the mid-3-second range.

Ford will offer two sets of 240-volt chargers with the Mustang Mach-E. The permanent home charger can add 32 miles per hour of charging, while the portable version can add 22 miles for each charging hour. The Mach-E has DC fast charging compatibility, and provided that the charger is rated at 150 kW, it can go from a 10% charge to 80% in 38 minutes, with the first 47 miles being added in 10 minutes. Last and least, there's also a 120-volt mobile charger that gets you 3 miles of charge per hour.

Ford is taking $500 pre-orders now, but you'll be waiting awhile for your Mach-E to show up. The first units available in late 2020 will be entry-level Mustang Mach-Es with either rear drive or all-wheel drive and either the long or short range batteries. The high-performance GTs won't be available until spring 2021. The base Select model will start at $43,895 before destination and tax incentives. The Premium trim will start at $50,600, the California Route 1 at $52,400, the First Edition at $59,900, and the GT at $60,500. 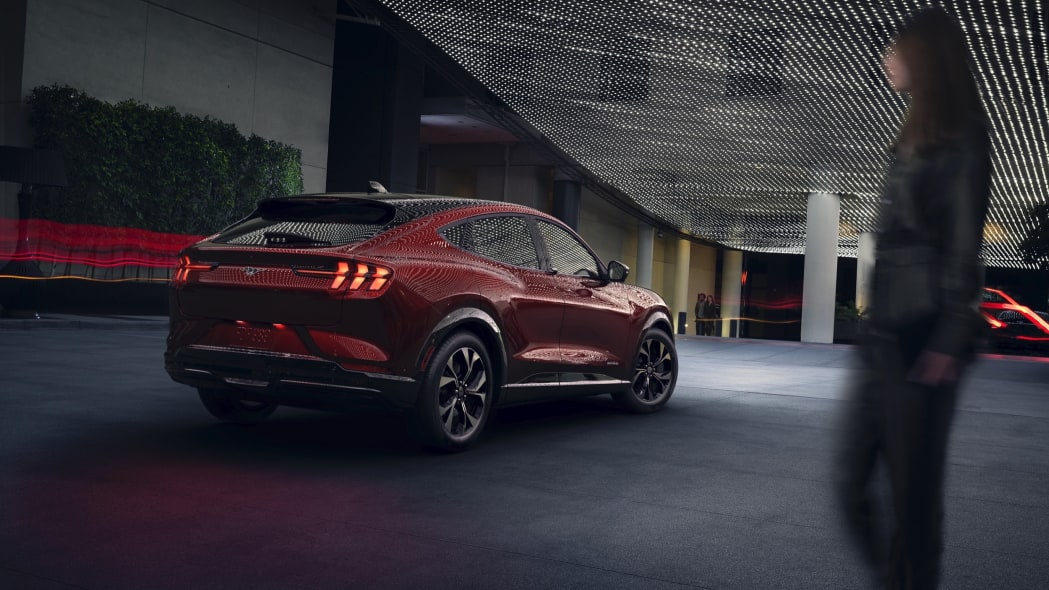