suzukiSuzuki Jimny
It didn't really start as a Suzuki.

The Suzuki Jimny is an icon of automotive simplicity. It doesn't offer many frills, but the tiny size and rugged ability make the vehicle a fantastic performer off-road. The folks from Budget Direct Insurance have a fresh batch of renderings that highlight the little SUV's evolution since 1970. 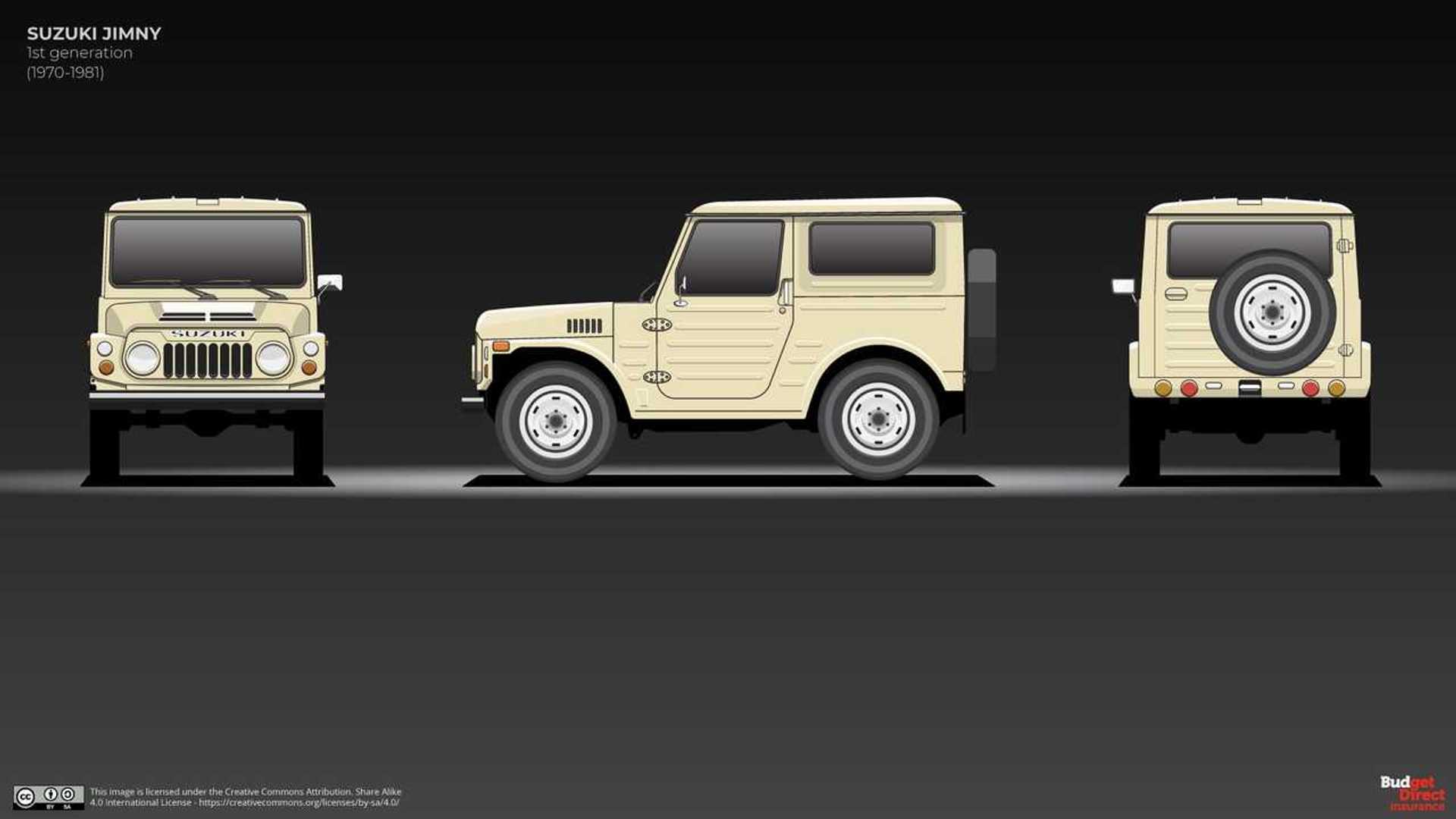 The Jimny didn't actually start as a Suzuki. In 1968, Suzuki purchased the manufacturing rights Hopestar ON360 because the Hope Motor Company struggled to mass-produce it.

Suzuki introduced its updated ON360 in 1970 and dubbed it the LJ10. The tweaks included replacing the original 359 cc air-cooled Mitsubishi-sourced engine with a 359-cc two-stroke, two-cylinder mill of the company's own design. With 24.66 horsepower (18.39 kilowatts) and 24.6 pound-feet (33.3 Newton-meters) of torque, the SUV wasn't very powerful, but a four-speed manual, two-speed transfer case, and part-time four-wheel drive offered impressive off-road performance.

Suzuki kept improving the LJ10, too. In 1972, a water-cooled engine replaced the original air-cooled unit. The model with the updated powerplant was the LJ20. The same year, the LJ20V introduced a fully enclosed body for a more all-weather-friendly vehicle than the original soft-top configuration. A four-seat variant arrived in 1975.

In the 1970s, the Intercontinental Equipment Corporation imported the LJ10 and LJ20 into the US. It was able to sell around 3,500 of them, predominantly in California, Nevada, and Arizona.

By the end of the first generation, the company offered soft top, fixed roof, and pickup variants of the Jimny. 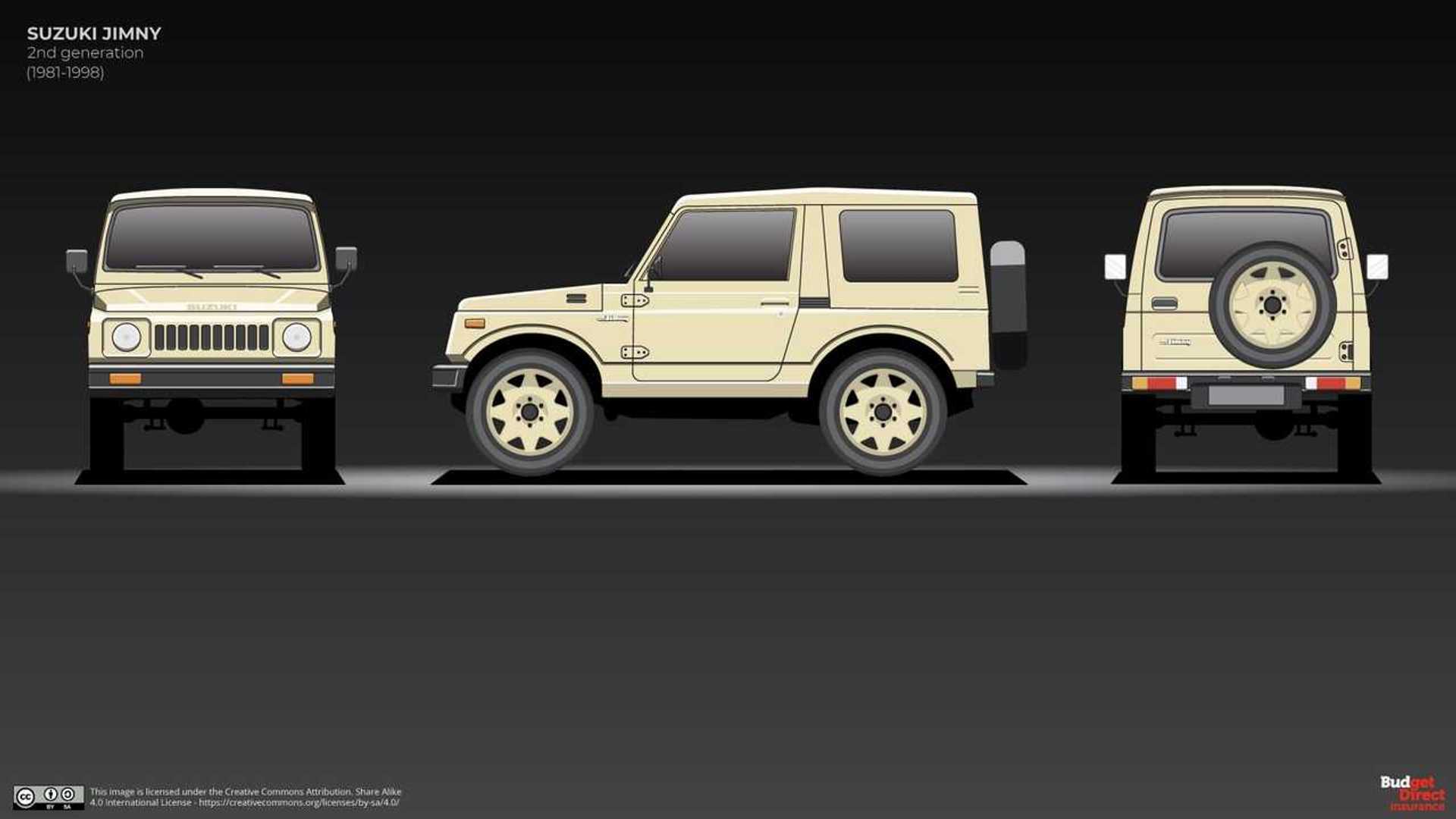 In 1981, the second generation of the Jimny debuted, and the company made it more comfortable to drive on the road, while still making sure the vehicle could perform on rugged terrain. There was also an emphasis on appealing more to markets outside of Japan. While the 539-cc two-stroke three-cylinder continued to be available in the domestic market for several years, the big addition to the lineup was a new 970cc four-cylinder with 51 hp (38 kW) and 59 lb-ft (80 Nm).

For the 1986 model year, the Samurai arrived in the US. Suzuki had continued to enlarge the model's engine, and the American version got a 1.3-liter four-cylinder with 63 hp (47 kW). It used a five-speed manual and part-time four-wheel drive Buyers could select a soft top or fixed roof body. It stuck around until the 1995 model year. 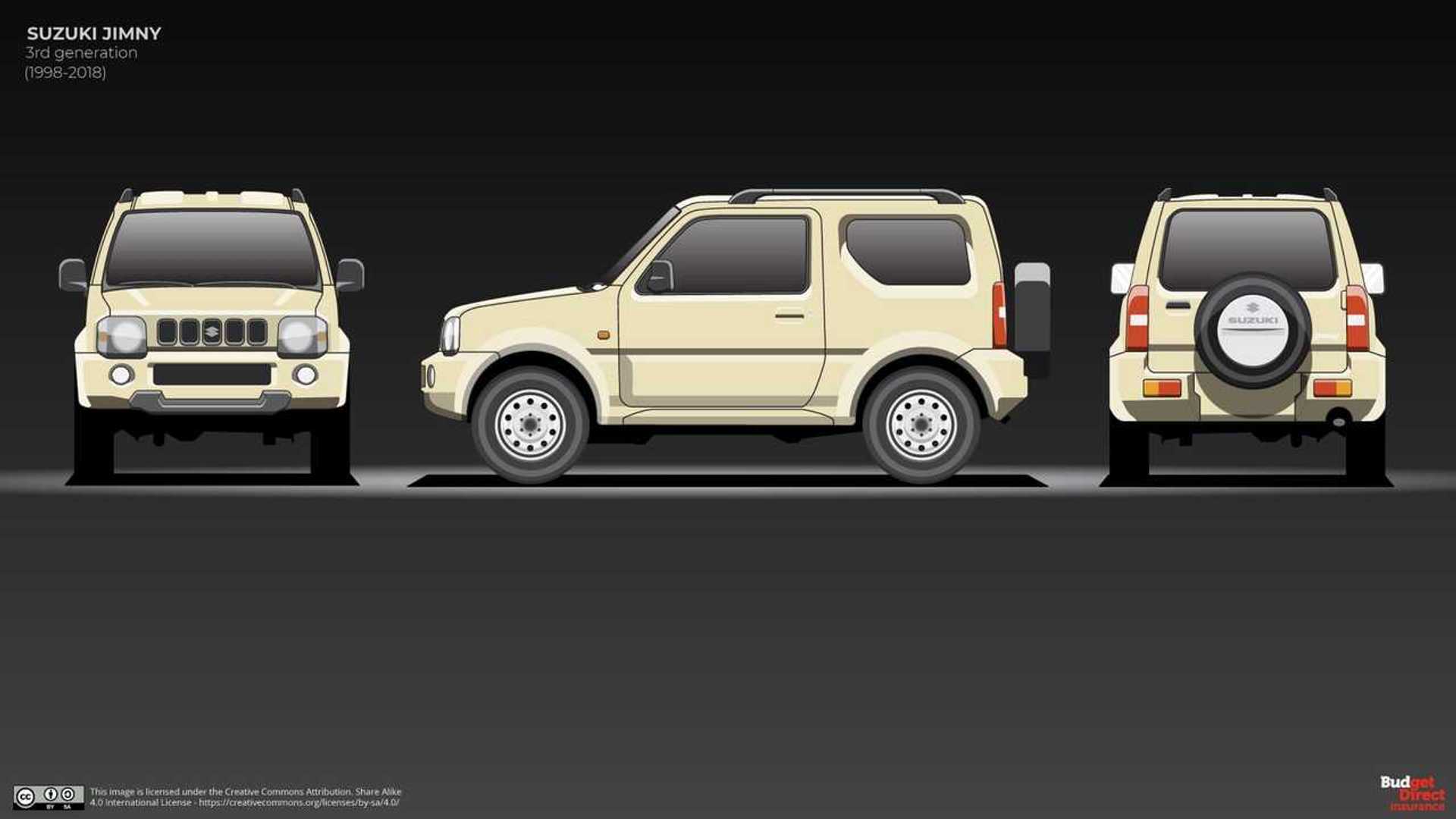 The third-gen Jimny arrived in 1998. It featured more rounded styling but still featured a body-on-frame chassis. Like for previous generations, Suzuki tailored a version of it to the Japanese market with kei-class-specification engine choices and had a model for the rest of the world. To appeal to European customers, Suzuki introduced a turbodiesel engine there in 2004 using a Renault-sourced 1.5-liter engine.

Through 2009, Europeans could get either a fabric or a hard roof. After that, only the fixed top was available. 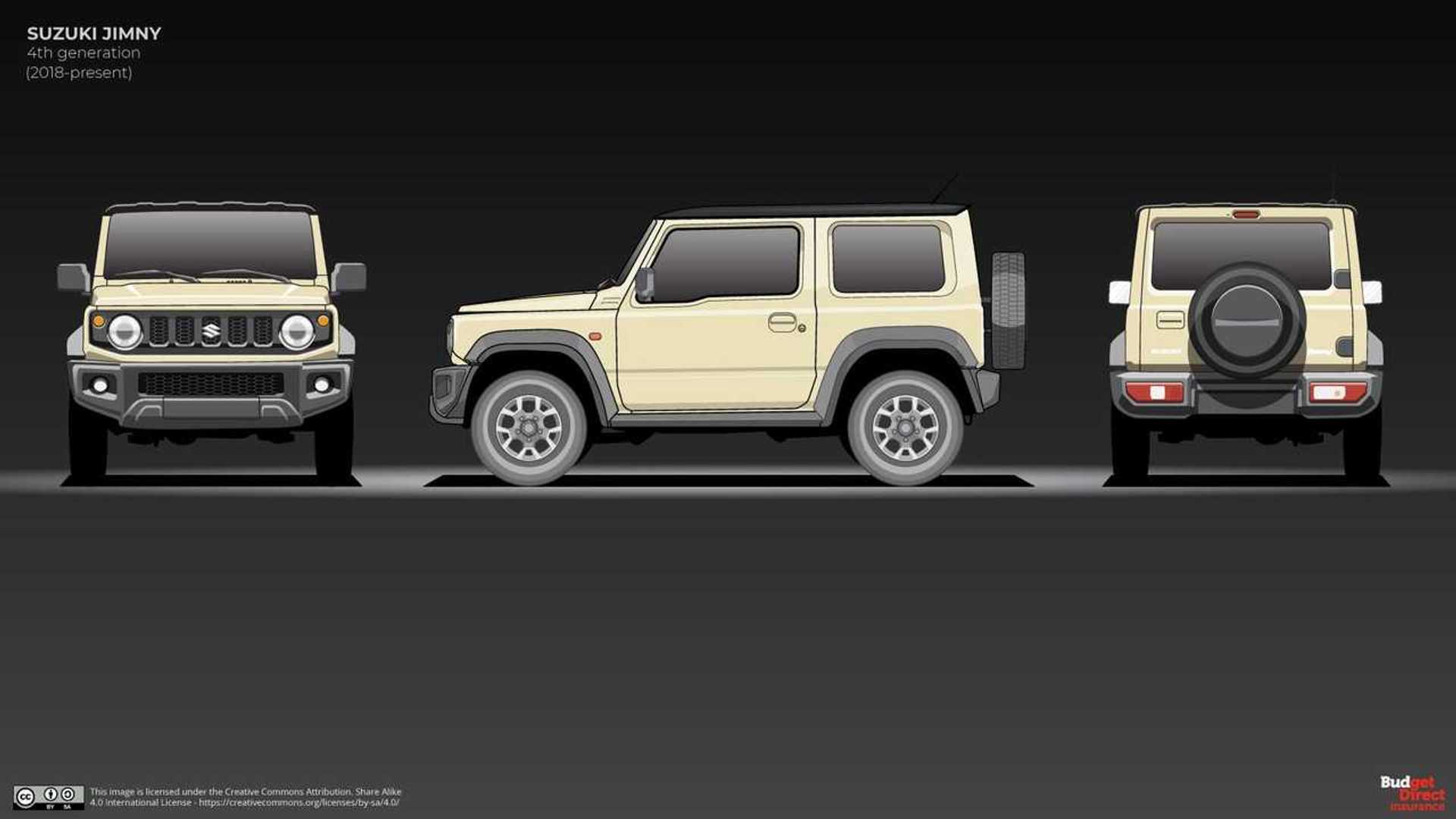 Inside, there's a far more modern-looking interior, including a touchscreen infotainment system on top of the center stack.

In 2020, Suzuki had to remove the Jimny from the European market because it didn't meet emissions requirements. Later in the year, the company reintroduced the vehicle as the Jimny Light Commercial Vehicle without the rear seats. 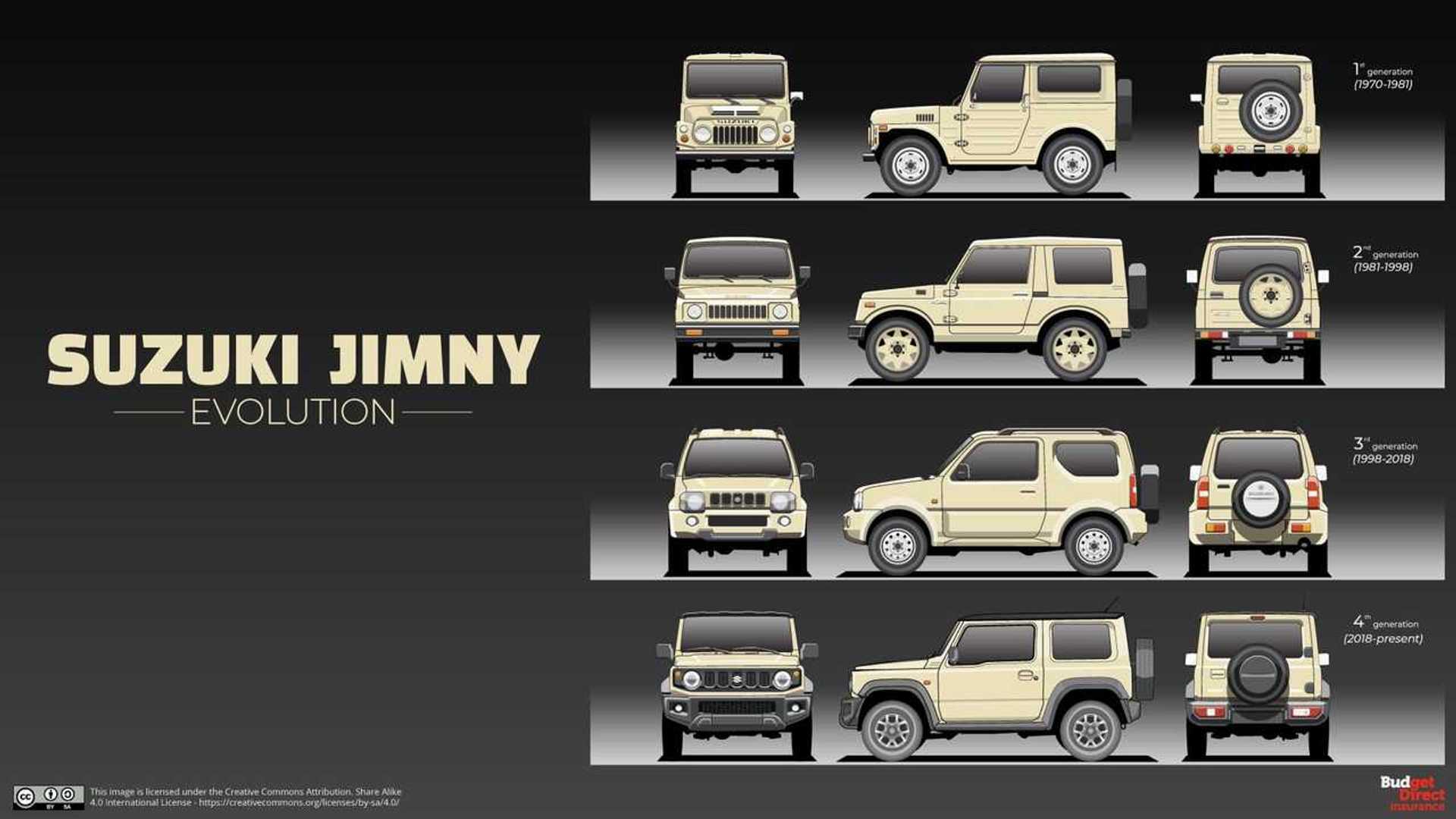