Race Recap: 2016 Bahrain Grand Prix Was Everything Good And Bad About F1 Nothing was as it seemed heading into Bahrain. We were told team bosses had nixed the qualifying experiment that flunked every test by every measure in Australia, but that didn't happen.

The FIA didn't give the teams the option of a wholesale return to the old format, the governing body only held a vote on whether to revert back to the old format in Q3 but stick with elimination gimmicks in Q1 and Q2. McLaren and Red Bull dissented, denying the chance for hybrid rounds. We're surprised none of the smaller teams voted against since elimination qualifying is hardest on them. Given the chance to fix the system again in Bahrain, Formula 1 failed again. The FIA and Bernie Ecclestone don't want to go back to the old system – because the race promoters don't want to go back to the old system – so all we know for sure is that there will be more meetings.

The FIA didn't give the teams the option of a wholesale return to the old format, the governing body only held a vote on whether to revert back to the old format in Q3 but stick with elimination gimmicks in Q1 and Q2. McLaren and Red Bull dissented, denying the chance forhybrid rounds. We're surprised none of the smaller teams voted against since elimination qualifying is hardest on them. Given the chance to fix the system again in Bahrain, Formula 1 failed again. The FIA and Bernie Ecclestone don't want to go back to the old system – because the race promoters don't want to go back to the old system – so all we know for sure is that there will be more meetings.

At the end of a long red light to start the race, Rosberg claimed his right to victory before Turn 1. The German made a great start, teammate Hamilton made another lackluster one, so Rosberg took the first corner in the lead and never gave it up except during pit stops. He always neutralized any threat from those behind, so the only time the F1 feed zoomed its lenses on him was at the start, in the pits, when lapping the field, and at the checkered flag.

Behind him it was literal touch-and-go. Hamilton was hard on Rosberg into Turn 1 but Hamilton didn't realize that both Williams' got sterling jumps off the line. When the Brit swung wide to take the first corner, Bottas took it for an open door and aimed straight for the inside. Hamilton turned in on the Finn and the Williams clobbered the Mercedes sidepod. Both drivers were able to continue without pitting, but the stewards blamed Bottas and hit him with a drive-through penalty.

That bang-up, plus sheer pace and a committed drive, helped Räikkönen make up for his poor start. He dropped back fifth on the first lap when he should have been second – he got promoted to third when Vettel retired on the formation lap, and would have cleared the stricken Hamilton at Turn 1. Following the first round of pit stops he emerged in second, and kept Rosberg honest for the rest of the race. He never got closer than 3.4 seconds to the German, but if the Mercedes suffered any fault the Ferrari would have capitalized. The potential good news is that even though Ferrari might not have the race pace to fight with Mercedes, it has the pace to keep Mercedes running hard.

Hamilton recovered from a dog-day afternoon to take third. The damaged chassis prevented any real fight, the team later saying that wrecked barge board and floor cost him a second per lap. If that's even half true then you can forget about that potential good news we just mentioned; in that case, we still haven't begun to see what the Mercedes can do, since Hamilton only finished 30 seconds behind Rosberg.

Daniel Ricciardo drove another quiet race, his fourth-place finish as anonymous as it was uneventful. The new tire allotments have opened up strategies, so it's not always easy to compare drivers. In Red Bull's case, it's difficult to tell if they really are the best of the rest at this point or if Ricciardo is simply able to do brilliant work with the chassis.

Haas has now scored points in its first two races, a feat that gladdens the team at the same time it chagrins the rest of the paddock. Grosjean finished fifth, one spot ahead of his classification in Australia, and this time he had to complete his pit stops on race time. It's a brilliant start the American effort, but it's got other team personnel lobbing more questions at the FIA about what they call "Ferrari's B team."

Max Verstappen climbed four places from his grid position in finishing sixth, and didn't need heroics, didn't need to pass his teammate, didn't need to cuss out his team to do it. The rumor already is that he's got a good chance of replacing Daniil Kvyat at Red Bull next year. Kvyat finished in seventh, getting swamped a few times by drivers behind and exhibiting poor defense, making up for it toward the end of the race with overtakes on the Williams duo.

Massa finished eighth with Bottas right behind in ninth. We're not sure if Williams has really dropped this far back – the team did say Bahrain would be a better judge of its car than Australia – or if it's merely lightning striking twice in the bad way. Bottas had his drive-through penalty, both cars had issues in the pits, and then they simply couldn't keep other cars behind on track. It's a long season, but they'll want to get the defense of their third-place finish going as soon as possible.

Stoffel Vandoorne, a name never before seen in F1 is now forever in the F1 books: the rookie filling in for Fernando Alonso scored the final point in the sole McLaren after Jenson Button retired. Last year's GP2 champion had never been in the MP4-31 before this weekend, but he qualified 12th – ahead of Button – and drove a flawless race. If he can get the equipment, he will be good.

Rosberg's 16th victory puts him level with Sir Stirling Moss in that category, but puts him even further ahead on the Driver's Championship leaderboard with 50 points. Hamilton has 33, Ricciardo has 24, Räikkönen and Grosjean are tied with 18. This factoid might be more important to Rosberg than the points, though: he has won five consecutive races going back to last year's Mexican Grand Prix, and every driver to have won five straight races (even across seasons) has won the championship.

Mercedes widened the gap in the Constructor's Championship, at 83 points to Ferrari's 33, Red Bull with 30 and Williams with 20.

There are two weeks until the next race in China – one that certain people think Sauber might not be able to make. We'll see you then, hopefully with a better qualifying spectacle. 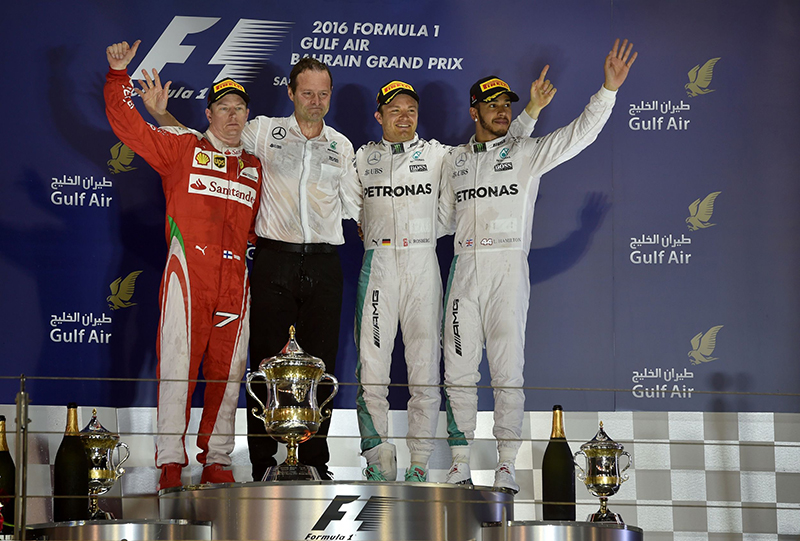