Renault's Winning Design For Car Of The Future Looks Like Balls

The vehicle would float with Maglev technology, and a magnetic belt would let them connect together.

Renault and the Central Saint Martins art college in London teamed up for a competition that let MA Industrial Design students imagine the car of the future. The winning entry was the Float from 23-year-old Yuchen Cai. She imagined a levitating sphere using Maglev technology that was able to connect to other examples of the vehicle to expand its size. As a prize, she got to spend two weeks at Renault's design studio in Paris to refine her idea.

Float's name comes from it using Maglev technology to get around without making any contact with the road surface. An individual pod would seat up to two people, but a magnetic belt around the center section would allow multiple units to connect together. A smartphone app would let someone hail the autonomous transporter.

Inside, simple controls would allow for navigation and communicating with folks in other pods. Occupants seeking privacy would also be able to alter the opacity of the generally transparent exterior. A sliding door in the body would make for easy entry and exits.

There were two other finalists in Renault's competition. Stephanie Chang Liu created Flo (above) as a concept for a vehicle serving three different purposes. Depending on a client's needs, it could transform among being for freight transport, personal mobility, or as a shared method of getting around like as an autonomous taxi.

Vue (above) by Tuna Yenici places a sphere on top of a chassis and takes inspiration from the relationship between people and their pets. The vehicle would be sad when dropping off its owner at work but greet the person happily when picking him or her up at the end of the day.

Last year, Renault challenged MA Industrial Design at Central Saint Martins' students to create the vehicle cabin of the future (gallery below). The winner was the Oura, which was a suit that simulated the feeling of floating while in a car. 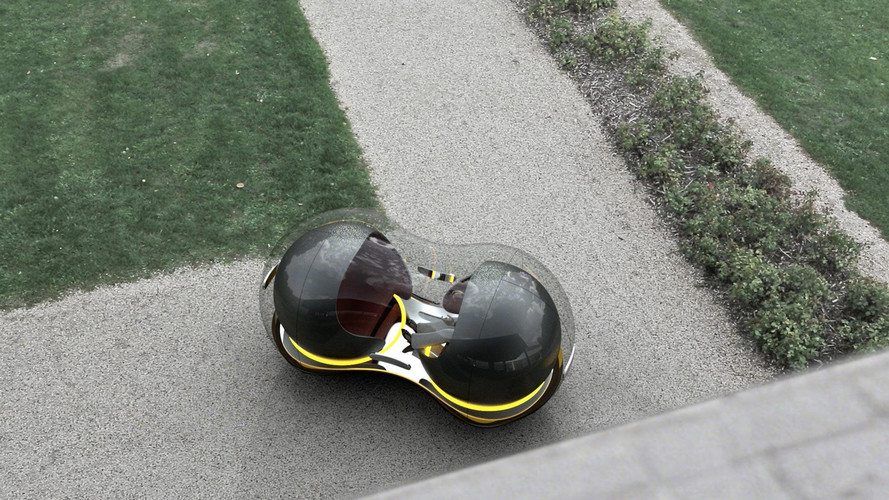