A classic donor, flawless design language and a performance to match that of modern bikes – what else could you possibly wish for?

In 2016, Mellow Motorcycles was co-founded by Flo Hubert and Amir Brajan, but these folks' relationship with the automotive industry stretches a lot further back. Brajan is an experienced motorcycle specialist, while Hubert spent a great chunk of his careers dealing with custom four-wheeled undertakings. As such, it goes without saying that they're not exactly rookies in this line of business.

Despite it's short history, the workshop amassed a staggering number of spectacular exploits that'll leave just about any moto-loving petrolhead lost for words. Additionally, Mellow continued to expand their crew and even opened a second location in the German city of Frankfurt. The firm's inventory houses a gorgeous selection of drool-worthy goodness, including a handsome BMW R80 named 'Perla Nera', a majestic Triumph Bonneville-based venture and a Honda CB750 that brings about some vintage vibes.

If this stirs your curiosity, Mellow's astonishing works of mechanical art can all be admired on their social media pages. Needless to say, you'll find absolutely no shortage of sexy masterpieces as you navigate through. To give you a better idea as to what these magicians are capable of achieving, we'll be having a look back to their very first creation, by the name of 'Tintin'. The project in question began with a 1979 model in Suzuki's revered GS550 lineup.

Before we dive in, let's take a minute to remind ourselves about what this donor is made of, shall we? The '79 GS550 is brought to life by a feral four-stroke DOHC inline-four behemoth, with a compression ratio of 8.6:1 and as many as four Mikuni carburetors. This fiendish piece of air-cooled machinery boasts two valves per cylinder head and a generous displacement of 549cc.

The entire structure is supported by telescopic forks up front, coupled with a double-sided swingarm and dual shocks on the opposite end. Braking duties are handled by a single 275 mm disc and a one-piston caliper at the front, joined by a drum unit at the rear.

GS550's stock swingarm was replaced with a GS1000's module, which contributes to a more aggressive riding stance. You will also find a pair of multi-spoked aftermarket wheels, hugged tightly by top-grade Heidenau K34 tires. At the front, stopping power is taken care of by a set of EBC floating brake rotors.

Furthermore, the team went about installing an array of electrical components from Motogadget's catalogue, such as discrete M-blaze bar-end turn signals and an RFID keyless ignition setup, as well as M-grips and an M-unit that runs the whole show.

The German moto wizards honored the inline-four colossus with a thorough overhaul and retuned its Mikuni carbs for an optimized performance. To round out these upgrades, they also equipped a new four-into-one titanium exhaust system. Finally, Mellow's Tintin receives clip-on handlebars and rear-mounted foot pegs from Tarozzi.

Right, now that we've concluded this creature's story, the workshop's Facebook and Instagram profiles are the next places you ought to be heading! A quick scroll over their range will certainly soothe your soul. 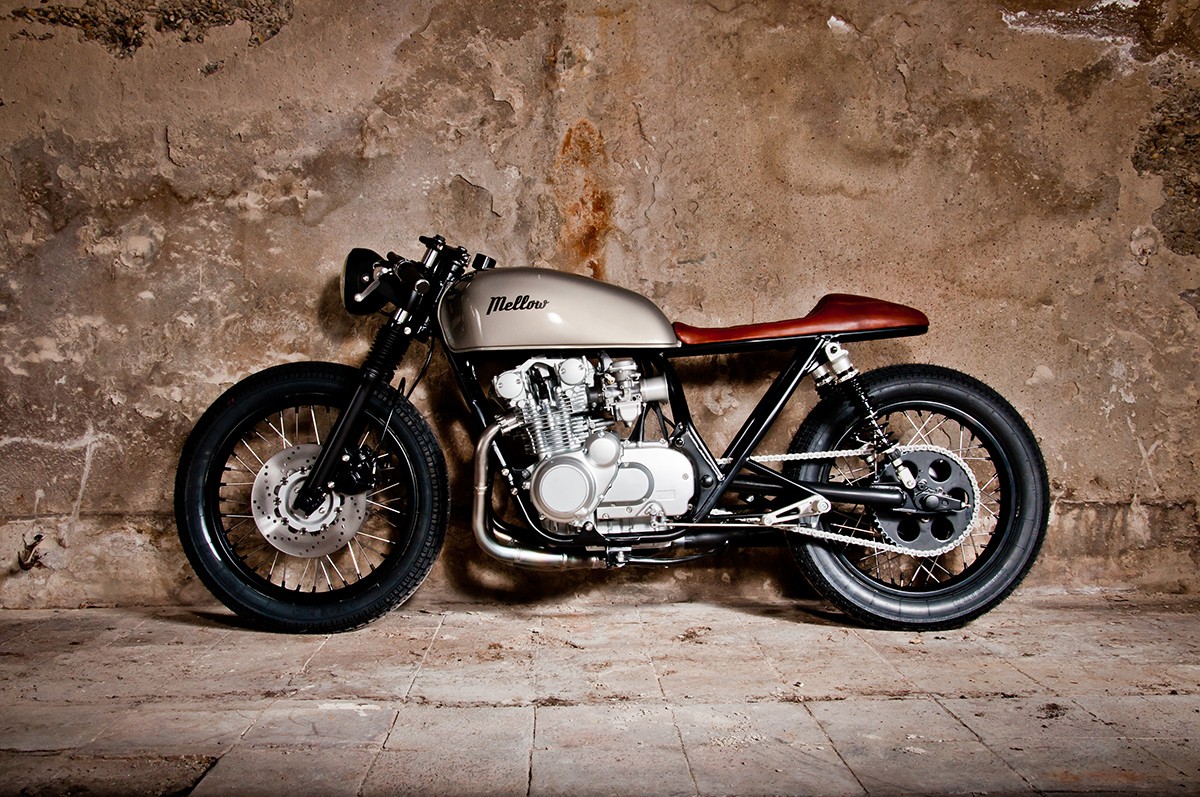