Xiaomi HiMo H1 e-Bike Is the Tiniest, Most Portable EV They say the strongest essences are kept in small bottles, and the latest EV from Xiami is bent on proving that. The HiMo H1 folding electric bicycle is now available for pre-order for the rest of the world, about 4 months after its debut in China.

Foldable bikes are not that much of a novelty anymore, as more makers are exploring this option in a bid to deliver to riders a product they can literally take everywhere, and thus minimize the chances of having it stolen. After all, a good lock or chain is only as good as the thief's determination to break it.

However, the latest from Xiaomi and its HiMo sub-brand, the HiMo H1, is an entirely different thing. It claims to be a foldable electric bicycle but it doesn't have any pedals, only foot rests. So it's more of a seated electric scooter that bears some resemblance to a bike in the way the frame is designed.

Its strongest selling point, though, is that it takes the concept of foldable to a new level, with the owner being able to pack it down to the size of an A3 sheet of paper and carrying it in a backpack.

H1 was released in China about 4 months ago and is now being made available for pre-orders in the rest of the world through IndieGoGo. As of the time of writing, super early birds have the chance to snap it up for $469 plus shipping, which is considerably less than what you'd pay for a mid-level e-bike, but more expensive than your average e-scooter.

The H1 is the winner of the German Reddot 2019 Award and, for such a tiny product, packs a decent punch. It's not destined for long rides but rather as a last-mile solution and for short commutes in the urban environment. This is the compromise that had to be made in order to deliver "the ultimate portable EV."

Weighing only 14.5 kg (32 pounds), the rear-wheel-drive H1 folds down to the size of a box, and can either be carried by hand or fit inside a backpack. Its small size also makes it a perfect fit for the trunk of a car or the space under a subway seat. This virtually does away with the risk of coming back out to the nasty surprise of finding your bike / scooter stolen or damaged.

When unfolded, it's built with comfort and safety in mind: the frame is adjustable to the rider's posture, height and body frame, while the padded mesh seat is designed for smooth rides. It might look silly – and it certainly does – but that's the "fun" of owning it, according to the makers. Apparently, the H1 makes for a stylish but safe ride that doesn't compromise on aspects like reliability and performance.

The wheels are small, like those on an e-scooter, but the tires are shock-absorbent. A mere look at this thing and you know you can only ride it on paved roads, bicycle paths (in countries where it's allowed) and flat, smooth surfaces in general.

The H1 comes with an LCD display with odometer and battery charge level, an LED headlight and rear reflector for maximum visibility on the road. Digital brakes are button-activated.

An 180W brushless DC motor is powered by HiMo's 7500mAh lithium battery, which promises an estimated range of 30 km (18.5 miles) at maximum weight capacity. Speaking of which, as you may have guessed, given how tiny this e-bike is, it comes with a weight limit of 100 kg (220 pounds). The battery weighs 1.8 kg (3.9 pounds), is removable and takes between four to six hours to fully charge.

For such a tiny thing, the estimated range might come as a surprise. It's only possible because the H1 doesn't reach high speeds: the makers list the top speed at 18 kph (11 mph). Arguably, that's not very fast but it's probably more than enough to get you to work on time and make your commute more fun. 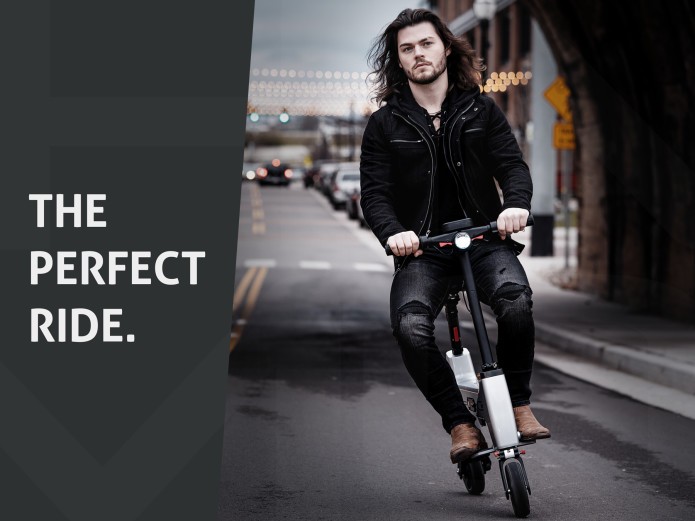 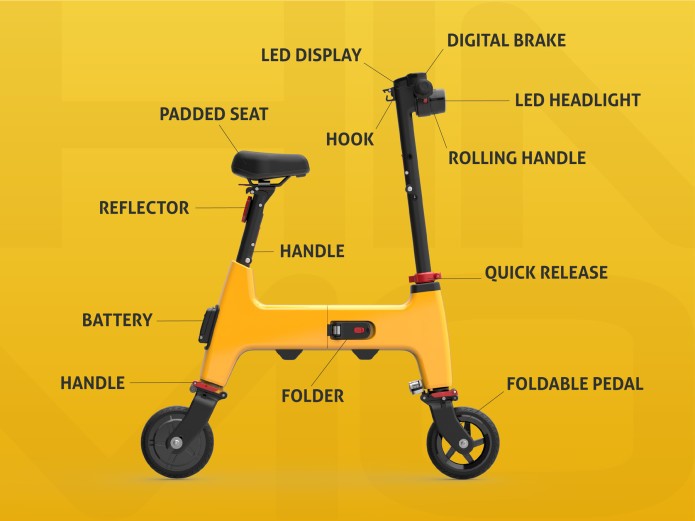 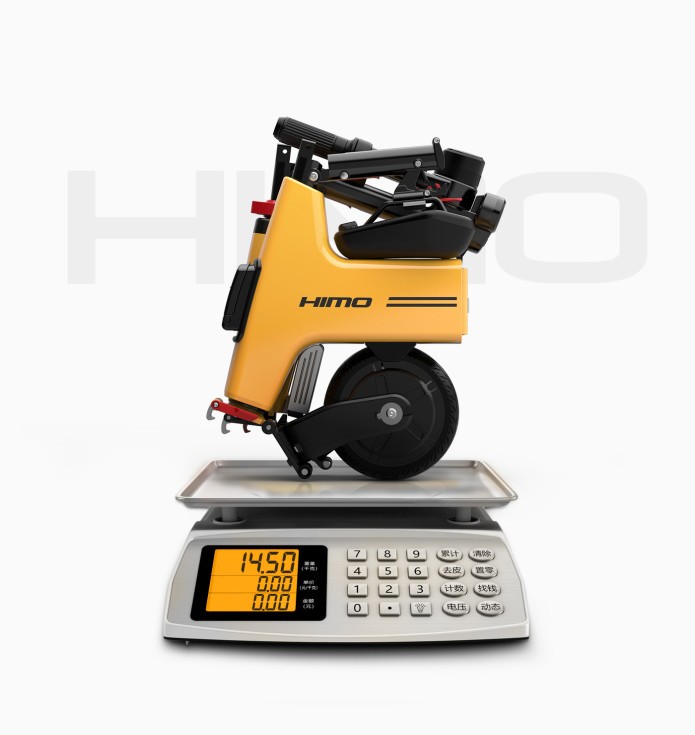