By our story count, this year's Frankfurt Motor Show was one of the busiest auto shows on record. We brought you more than 70 reveals from the center of the action, and are still finding and compiling a lot of other content with Frankfurt-origins as well.

With such a massive amount of raw data to choose from, picking just five debuts to highlight in our regular Editors' Choice feature was no small job. As usual, Autoblog staffers were tasked only with awarding points to the cars and concepts that spoke to us the most – our favorite things to look at, read about and write about from the show. Said another way, these are not necessarily the most important or impressive debuts from the Messe; the winners reflect our personal favorites.

As you'll read below, there were a lot more concept cars than production vehicles that knocked our socks off this time than in years past. Arguably the most impressive production debut – Porsche's 918 Spyder – came close to the top five but was held back a little by being overly familiar (the danger of a super-long rollout plan). But really, this crop of conceptual metal was just superbly executed. Read our list below and then tell us where we went wrong and right, in Comments.

If we're honest, a few of us are sort of shocked that the Nanuk didn't garner more votes. After all, this concept surely isn't lacking in rad attributes – it's a high-riding, Italian-designed coupe with butterfly doors, all-wheel drive and a 5.0-liter V10 TDI engine underhood. Sounds pretty sweet to us.

But consider this: The Nanuk is, essentially, a redux of the Italdesign Giugiaro Parcour concept that debuted in Geneva earlier this year. And while that concept wowed us enough to be named Best In Show at the Swiss expo, perhaps we should have expected more from the Audi-badged version. Beyond that, some of our editors were smitten with the hotness found at the other end of Audi's show stage – the Sport Quattroconcept earned 16 points in our voting that could have otherwise gone to the Nanuk. Ah, well. There's still plenty to love about the Nanuk, and even in fifth place, it still handily bested dozens of other debuts in our voting. 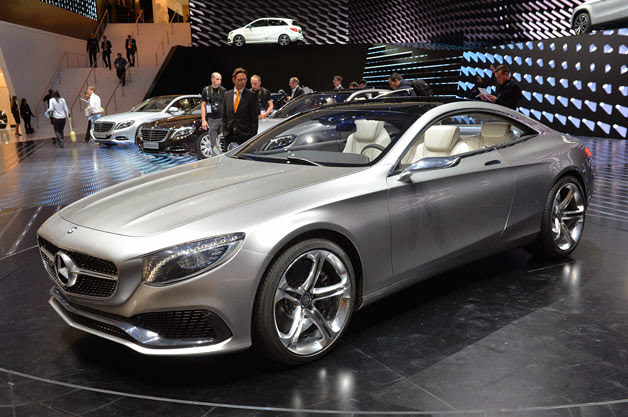 When we bid farewell to the current CL-Class coupe, Mercedes-Benz will replace it with a flagship two-door that properly wears the S-Class badge. And while we've seen examples of this two-door CL successor out testing, it's this concept from the Frankfurt Motor Show that has given us our clearest look at what will no doubt be an absolutely stunning beast to behold.

Sure, there are a lot of conceptual cues to this show car's design, including oversized wheels and too-small mirrors, but honestly, the rest of the car's rakish shape looks pretty damn near production-ready. This will no doubt be a Grand Tourer in the grandest sense.

The very quintessence of the term "European concept car," Opel's Monza Concept blends coupe styling with shooting brake proportions, theorizes a hybrid electric-compressed natural gas powertrain and offers access to is slick confines by way of two-seat-wide gullwing doors. If it weren't for the Opel lightning bolt badge out front, we would swear this thing was French.

Reviving the evocative Monza nameplate was one hell of a hook for this concept car, but pointing to this wild-child as the inspiration for future models is really what our judges responded to. Do we believe that Opel will offer LED-projection-display dashboards in coming production models? Not particularly, no. Are we hankering to see this design language re-spun for a not-too-distant German coupe? Yes, indeed.

Had the BMW i8 – complete with its exotic bi-modal, bi-power drive system, otherworldly styling details and fancy doors – been introduced in Frankfurt as a concept car, no one would have batted an eyelash. Of course, the hybrid coupe is the real deal, one of a new generation of sports cars that makes use of exotic powertrains to excite the marketplace in a way that defies the grand tradition of internal-combustion alone. Though they might appeal to different buyers (with different wallet sizes) the recent introduction of the i8, thePorsche 918 Spyder, LaFerrari, and McLaren's P1, will surely mark out a historic sea change in the enthusiast motoring world.

Of course, where the rest of that list is made of metal so exotic that only the world's very richest will ever garage one, BMW's (admittedly lower-key) i8 will be available for the mere super-rich to buy. An MSRP of $135,700 does not a plebian vehicle make, but it's not unobtainium to anyone who shops in the Porsche 911zone, either.

The only production car on our list still looks like it was beamed in from the future though, which made it a star in Germany and gave it a place of honor amongst our editors.

In a show dominated by impressive concept cars (a fact our list of favorites clearly reflects), it may be a bit surprising that the Volvo Concept Coupe came out on top of the voting. Undeniably handsome it may be, but the Volvo two-door lacks the shock-and-awe factor that generally accompanies these European flights of fancy – there isn't a scissor-wing door to be found on the thing.

What our voters responded to, however, was the impressive design path illustrated by the Concept Coupe and the promise it seems to hold for a redesigned Volvo range of the near future. The graceful and modern design language shown in the sheetmetal can easily be imagined atop a sedan, wagon or crossover body, and without needing the overwhelming ornamentation of massive LEDs or 23-inch wheels to look proper. What's more, not much of the fresh, tweed-, leather- and birch-filled cabin would look out of place in your typical high-design Volvo interior.

So, while we find the Concept Coupe an impeccable piece of show car craftsmanship, and no fooling, what we're really voting for is a decade's worth of future Volvos to love. No pressure.