What is it?
It takes a brave soul to ask an obvious question. God bless whoever was brave enough to ask one at the end of that monthly Ferrari 'town hall' meeting a couple of years ago, then, concerning exactly why it is that the company doesn't make a car like the much-loved, big-selling 550 Maranello anymore.

That, in my head at least, must have been how the new Ferrari Roma came into being - not that the company is letting on. There will have been a prevailing will from the management to make more of the firm's modern front-engined V8 platform architecture shared with the Portofino convertible, of course. An enthusiasm, too, from Ferrari's design team to seize the opportunity, once it was presented, to bring some classic, coupé-bodied elegance back into showrooms.

But I reckon the bold arm-raiser at the back of the 'big team get-together' should get most of the credit here. Perhaps it was Giovanni from accounts. Since he doesn't look great in red trousers, they don't let him out of the office much, but he runs a mean Excel sheet, he makes a mean Chicken Cacciatore and he's been biding his time, puzzled by the 550 question, for a while.

Haven't we all. The 550 was one of Ferrari's modern high watermarks for front-engined GTs. Smart-looking, usable, soulful, fast, involving and, most of all, really well sorted for the road, it was followed up by increasingly wild and expensive front-engined, twelve-cylinder successors that incrementally became less and less about everyday usability and accessible handling appeal and more and more about outright pace, grip, noise and lurid performance thrills as the years passed.

The void that strategic shift left in the Ferrari model range has evidently taken some time to become apparent to the company's product planners, but we'll let them off on that score. It was a bit of a mental leap to invoke the spirit of a car like the 550, not to mention so many other of the company's V12 grand touring greats of the 1950s and 1960s, with a reimagined fixed-head version of the turbo V8-powered Portofino – itself not the most revered of modern Ferraris, after all.

And yet what the Roma proves is how much can be achieved through a handful of very well-chosen technical changes. The car has quite a rich and ritzy new-generation cockpit, too. And last but by no means least, it might be the most dazzling achievement yet of Ferrari's own in-house Centro Stile design department. It's an important new model addition, this – and not just for Ferrari, but with implications for the whole of its segment.

What's it like?
To these eyes, the Roma is probably the best-looking new normal-series-production Ferrari since the 458, possibly even since the F355. It has sublime proportions, some beautifully pristine surfaces and just a hint of visual menace about it. Some lovely detailing, too. The way the carbonfibre skirts and front splitter echo the shape of the bodywork above them, almost like a reflection in millpond-smooth water, is very clever indeed.

It's a 2+2 (something the celebrated 550 Maranello wasn't) with a bold and quite lavish interior very much intended to make inroads into the customer bases of the likes of Audi, Mercedes-AMG and even Bentley. The Roma's back seats are usable only for smaller adults and kids, but it has a boot big enough for a couple of small flight cases and that even offers some through-loading space for longer loads. The seats are soft, easily berthed and comfortable over distance, and its infotainment technology is new also.

The Roma inherits its dual-screen 'human-machine interface' - which, in this instance, means a digital instrument screen and a portrait-oriented infotainment screen - from the SF90 Stradale. The 16in instrument screen is controlled via a haptic thumbpad on one of the spokes of the new steering wheel. The new wheel hub design consolidates and simplifies some secondary controls and moves others from the front of the wheel to the back so that it looks less cluttered.

You control the window wipers through a little knob rather than a rocker switch, for example, which does make life easier. Although other functions are operated via capacitive touch-sensitive switches, rather than physical buttons, which are only lit and 'active' at certain times and didn't make life easier for this tester.

Ferrari does admit that, under the skin, the Roma's all-aluminium chassis and body-in-white share a fair bit with the Portofino. The firm's claim is that, in those two areas combined, the Roma is 70% new, although I suspect that's 70% by individually itemised component, not by volume or weight. Sure enough, if you compare the technical dimensions of the car with those of the Portofino, you'll quickly see that the two wheelbases are identical.

The Roma's roof height is significantly lower, however, and its body and axles wider. At the same time, some of the new and repositioned mechanicals of the Roma's driveline have helped deliver it a centre of gravity some 20mm lower than that of the related hard-top convertible. It's also nearly 100kg lighter.

The Roma is powered by much the same 3.9-litre twin-turbo V8 that powers the current Portofino and the GTC4 Lusso T, although some new cams and cleverer turbo controls allow it to make 20bhp more peak power than in the Portofino, as well as a slightly broader spread of peak torque. In the exhaust, Ferrari has added gas particulate filters but removed the Portofino's conventional silencers, adopting a new bypass system that helps regulate and control the overall noise level instead.

Downstream of the engine, there's an eight-speed dual-clutch transaxle gearbox derived from the one on the SF90 plug-in hybrid supercar, which has a broader spread of ratios than the Portofino's seven-speeder and sits lower in the rear of the car.

Downstream farther still, the Roma gets Ferrari's torque-vectoring e-differential as standard, as well as its very latest Side Slip Control 6.0 and Ferrari Dynamic Enhancer electronic torque vectoring systems. Magnetorheological adaptive dampers are optional and were fitted to our test car; but even if you don't have them, there clearly isn't much in Maranello's big box of technological tricks that this entry-level model is missing out on.

Once you're off and rolling at almost any speed, the Roma makes a much better first impression than either the Portofino or its related California predecessor ever managed. Like all modern Ferraris, it has a direct steering ratio that picks up pace only just off-centre, and here, as in any of the firm's models, that takes some getting used to.

But when cornering quickly, the Roma rolls appreciably less than the Portofino and is quite a lot more naturally agile. It has chassis response much better-matched to its quick steering, in other words, and its handling feels so much more natural, harmonious and keen as a result. You can judge and process the influence you're having on the front wheels really intuitively and place the car with lots of confidence.

The Roma also rides more gently than the Portofino, but with much better close body control. Ferrari's engineers will tell you that it actually uses the same coil suspension springs as the Portofino at the front axle and 10% softer springs at the rear. Allowing for the Roma's extra track width, however, that makes for drops in effective spring rate at both ends.

And yet, because it's also lower and lighter than its convertible cousin, the Roma's roll rate (the speed at which it rotates into roll when cornering, not the angle it reaches) is actually 10% lower than the Portofino's, so it's more supple-riding and better-handling. That, in a nutshell, is the diffference that better 'vehicle fundamentals' make.

And the Roma feels very much that way on a tight, occasionally bumpy, serpentine mountain pass like the one we sought out for our testing and photos. It tucks into hairpins with an alacrity the Portofino always seemed to be feigning. Although not quite supercar-like in its outright pace or alertness, it's really brisk through the middle of the tachometer's arc, and it also has the building torque delivery and high-range flexibility that has distinguished so many Ferraris with this engine over the last few years.

It feels lighter and leaner than so many sporting GTs, both under power and on turn-in. And it sounds the part, too: not exactly sweet or woofling but as musical as you can imagine a turbo V8 with a flat-plane crank really getting and full of brassy, tremulous, likeably genuine audible character.

Ferrari's manettino switch lets you choose between five drive modes, which give you increasing freedom to explore the really impressive handling balance and rear-driven throttle-adjustability of the chassis with as much or little electronic safety net as you please, just as you might in the 488 or F8 Tributo. Just like those mid-engined dynamic exemplars, in fact, the Roma is so configurable, indulgent and forgiving that it really is a lot like a front-engined 458 or 488 at the limit of grip. I'm pretty sure nobody ever wrote that about a California.

Should I buy one?
It would certainly be a mistake to dismiss the Roma on the basis that it's just a Portofino with a fixed roof or the latest version of 'that Ferrari that was supposed to be a Maserati'. Believe me, this car is a great deal more significant than that.

There's a clear sense of the modern entry-level V8 Ferrari finally hitting its potential with the Roma, both aesthetically and dynamically, and of reaching down into high-end Porsche 911, Audi, Aston Martin and Mercedes-AMG sports car territory with genuine purpose and threat for the first time.

Usable and rounded enough to enjoy on any day of the year, and on all sorts of trips and occasions, this is a proper Ferrari GT of a likably simple kind, the likes of which we haven't seen in a long time. Here's hoping that it proves that the people who count still know a really good Ferrari road car when they see one. 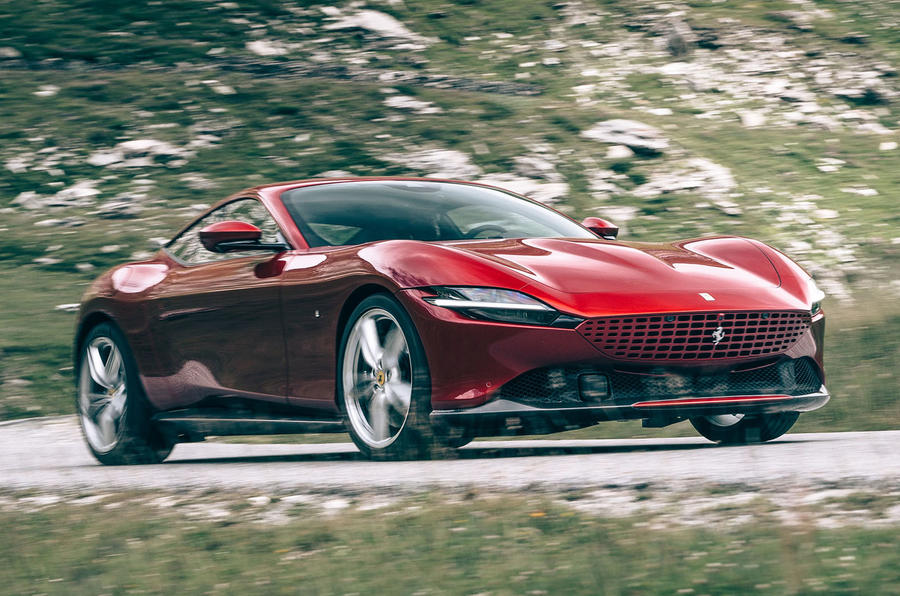 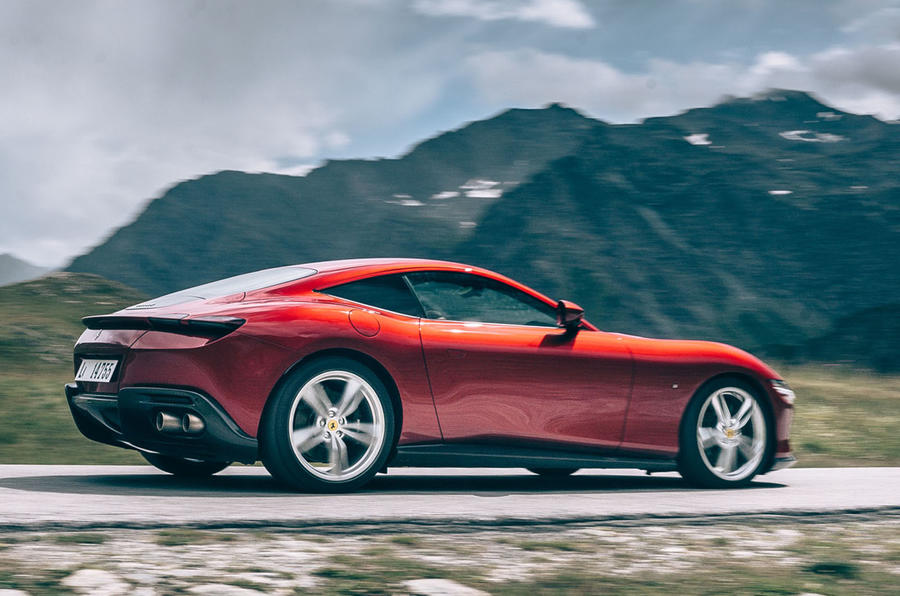