Let the war of words begin.

Did you hear a new Ford Bronco is coming soon? Actually, it should've been here by now, but a pesky global pandemic called Coronavirus basically changed the plans of everything. According to Ford, the reborn off-roader will debut in July. And according to a high-level Ford executive it will allegedly be "superior" to the Jeep Wrangler. Imagine that.

We have Twitter to thank for this revelation. Mixed among the current political discussions came word from Michael Wayland, who quoted Ford Chief Operating Officer Jim Farley as specifically saying the new Bronco would be "a much superior product" versus the popular Wrangler.

It should come as no surprise that Ford is touting the abilities of the Bronco, but it's rare to see a direct call-out like this coming from such a high level of management. And it's not exactly a secret that the new Bronco will be aimed squarely at the Wrangler; patent applications discovered long ago showed Ford's off-roader getting a removable roof and doors, just like the Wrangler. In fact, the patent app for the doors suggests removing them on the Bronco will be much easier as opposed to Jeep's process. That could certainly be one area where the Ford is superior.

Of course, snazzy removable doors means nothing if the Bronco can't compete with the Wrangler's off-road prowess. To that end, we also turn to a patent application for a complex active suspension system that can raise or lower the ride height, disconnect the sway bars, and in some settings, allow the vehicle to wiggle about in a dance mode. It sounds cheeky, but such an oscillating action could have benefits for dislodging a vehicle mired in dirt or mud.

As for other off-road attributes, we know the Bronco will have an independent front suspension versus the solid axle for the Wrangler. That could be better or worse depending on who you talk to, but we've heard it will also have locking differentials front and rear. That's a big deal in the off-road world, and if the aforementioned active suspension does make it to the Bronco, there's no reason to believe it won't at least be equal to the Wrangler when the going gets tough.

Will it be a match in dealer showrooms, though? If Ford wants a piece of the Wrangler's market share, the Bronco will need to be in the ballpark price-wise. That means a starting MSRP under $30,000 for two-door models, with four-door variants around $32,000. A decked-out Wrangler Rubicon Recon can top $50,000, so Ford certainly has some room to get fancy with high-end editions. Hopefully, we'll get some answers later this summer. 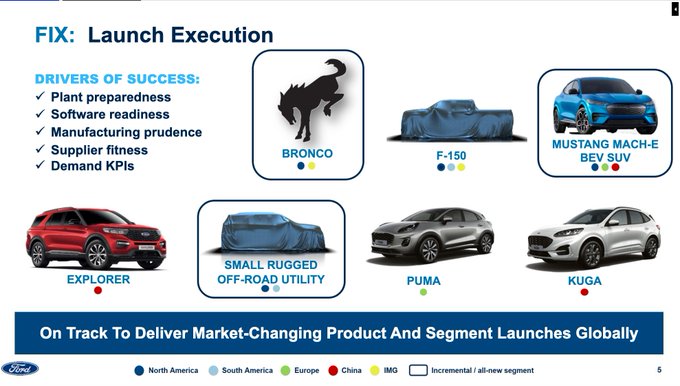