Penalty Points: The Counterpart Driving Licence Part of the License With the coming into force of the penalty points system, the only license will not suffice. It will necessarily go hand in hand with an additional document, the Driving Licence Counterpart (DLC).

In fact, each holder of a driving license shall always have these two documents in his possession. Otherwise, he will commit an offense. Now, these two documents together constitute a license. The DLC will be distributed to holders of a license and the holder of a provisional license ('learner') from 21 January. It is only when the distribution of the DLC completed, and all required systems in place, the new formula of penalty points come into force.

As announced by the officers of the Ministry of Public Infrastructure, the Traffic Management and Road Safety Unit and the police, Thursday, Driving License Counterparts will be distributed in alphabetical order to hold a driving license and a provisional license to January 21, and until 21 March 2013. Distribution, which will be provided by Leal Informatics Ltd, will be from 9 to 19 hours in 21 police stations across the country and two police stations in Rodrigues. (See the list of items and distribution dates below.) 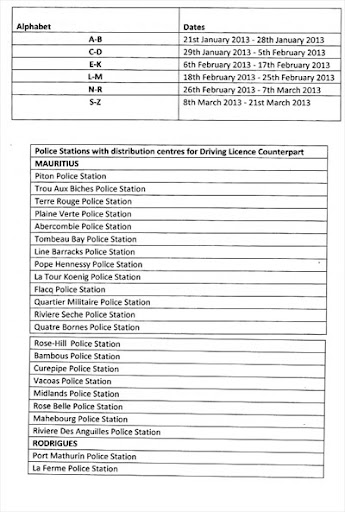 Several conditions are attached to the distribution of Driving Licence Counterparts. First, to obtain this document, it will be essential to present the national identity card or birth certificate in A4 format, driver's license and proof of address. Authorities will be flexible. Holder of a license may request a third party to recover its Counterpart Driving Licence. It must bring a letter of authorization and identity card of the person concerned. Moreover, a person may represent four applicants at a time.

To the press on Thursday, Dharamdev Nathoo, Principal Engineer at TMRSU, should note that the original or copy of Counterpart Driving Licence shall in no case be folded. In addition, if the document is lost or damaged, it may be replaced, against payment of Rs 100.

According to the Deputy Commissioner of Police Beekun Rashid, the Traffic Branch, the system Counterpart Driving Licence will also help flush the system and eliminate the 'fake driving licenses'.

How will the penalty points?

The fundamental point remains that the number of points above punished for any offense not be noted that the authority of the magistrate. The police have no authority to remove the driver points. In case of violation of the rules of the road, the driver will be assigned penalty points depending on the seriousness of the offense. Having accumulated a total of 16 points, his license will be suspended for a minimum period of six months. The 19 crimes that fall under the penalty points and the scale of planned deduction of points are: