bikescustom bikemotorcyclesuzukiSuzuki GSX-R750tuning
Is it just me, or is Indonesia slowly becoming a cafe racer paradise?

Over the years, we've witnessed an ever-growing number of groovy custom two-wheelers come out of Indonesia's capital, Jakarta. The country's permissive traffic laws allow moto surgeons to go absolutely wild, and the final results are often awe-inspiring. Quite frankly, I've got nothing but love for these spectacular displays of sheer creativity!

Additionally, the country's annual Kustomfest helps bring the masterpieces of countless workshops and solo craftsmen under one roof. Let me tell you, this show hosts some of the raddest works of mechanical art you'll ever come across, period.

In fact, let's dive in a little deeper and have a look at one sinister 1995 Suzuki GSX-R750-based project. One thing to keep in mind is that this marvel is the result of a single man's painstaking efforts. The ambitious fellow goes by the name of Rusdie Jafin, and his glorious creation should give you a pretty clear idea as to what these Indonesian folks are capable of achieving.

Before we go into any details about Jafin's menacing leviathan, we'll kick things off by mentioning a few of the original bike's specs. Suzuki's 1995 model in the GSX-R750 range is put in motion by a four-stroke DOHC inline-four powerplant, with four valves per cylinder and a colossal displacement of 749cc.

This liquid-cooled monstrosity will generate a whopping 127 bhp at 12,000 rpm, joined by up to 58 pound-feet (79 Nm) of torque output at around 9,000 revs. A six-speed constant mesh transmission is tasked with channeling the behemoth's force to its rear 17-inch three-spoke alloy wheel through a chain final drive. Ultimately, Suzuki's untamed beast is blessed with a generous top speed of 153 mph (246 kph).

At the front, GSX-R750 is supported by a couple of 43 mm (1.7 inches) Showa inverted forks, along with a single shock absorber and a double-sided swingarm on the opposite end. Braking duties are taken care of by dual 310 mm (12.2 inches) rotors and Nissin six-piston calipers up front, accompanied by a 280 mm (11 inches) disc and a two-piston caliper from Nissin at the rear.

Now, Jafin began by disposing of the bike's bulky bodywork to make room for his very own hand-crafted counterparts, including a retro-style fuel tank and a one-off tail section that help achieve the desired cafe racer aesthetic.

The following step consisted of transplanting an Aprilia RVX 1000's Ohlins forks and a Kawasaki ZX9's swingarm onto his unique two-wheeled beauty. Furthermore, its multi-spoked aftermarket wheels wear a Honda CBX550F's front and rear braking setup, which prides itself with fresh Brembo components.

While the brakes' appearance might mislead you into thinking they are drum modules, you may be surprised to find that they hide ventilated discs. GSX-R750's four-cylinder mill breathes with ease, thanks to a custom straight-cut exhaust system. Needless to say, this thing is one noisy little devil!

Last but not least, Jafin topped things off by treating his new ride to a neat matte black finish that brings about some very rugged vibes.

Personally, I'm hoping to see this talented guy tackling more projects in the future. At this pace, we'd certainly find his exploits featured on the upcoming editions of Kustomfest's tasty goodness. 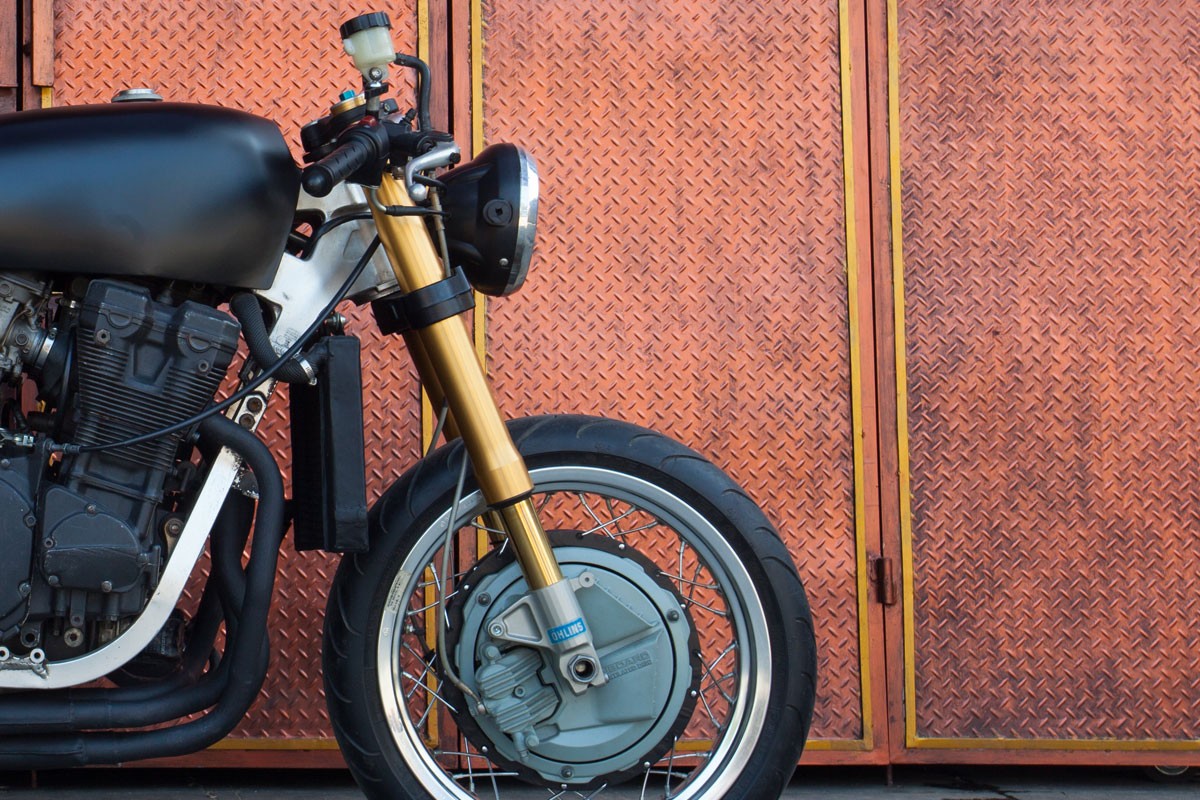 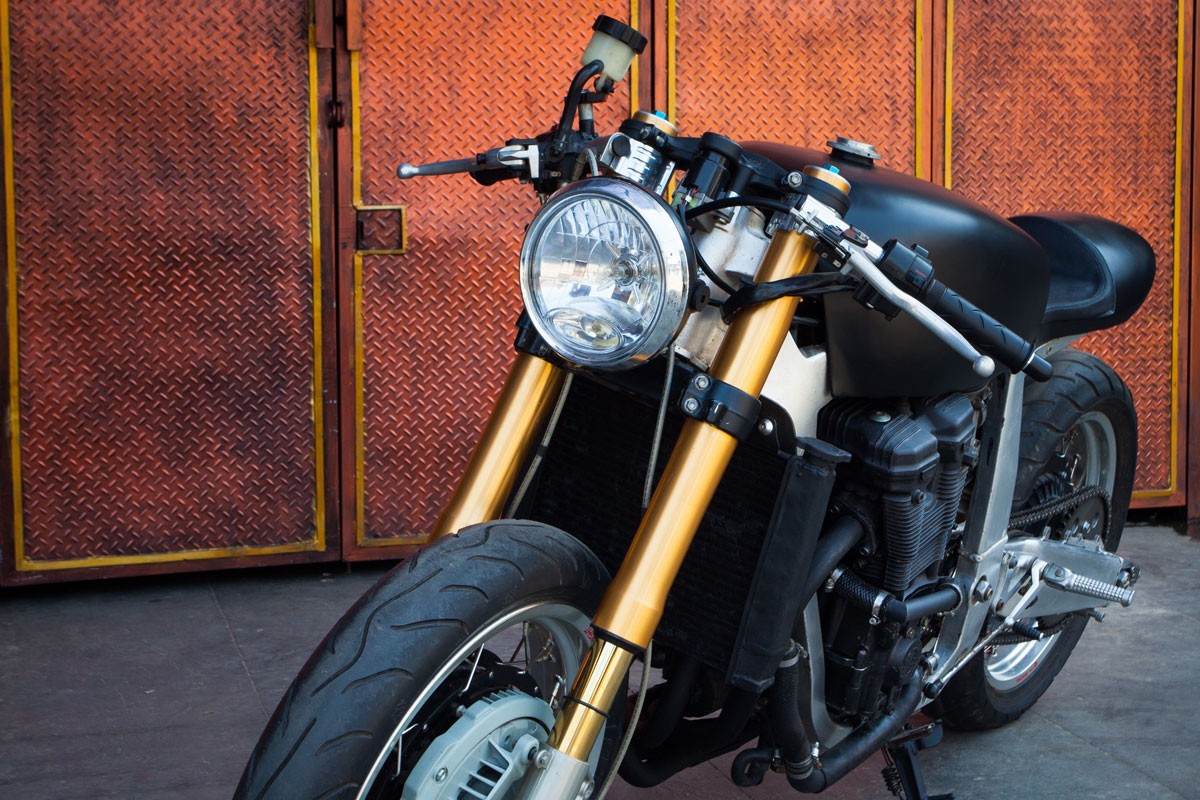 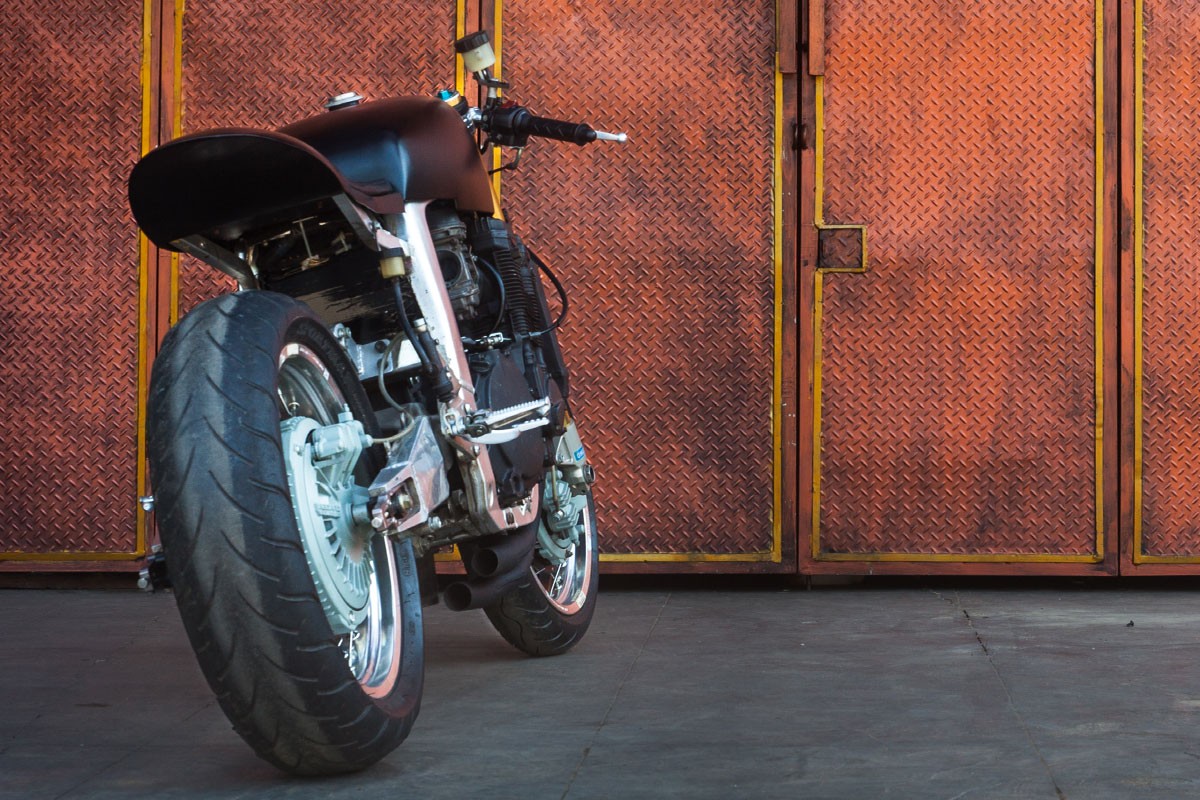