ruck ferrariUSvolvo
There are a lot of stories about how this might happen.

Photographs show the aftermath of a Volvo semi ramming into a Ferrari GTC4Lusso at a loading dock. Unraveling the story behind the crash feels straight out of Rashomon because there are so many different claims about the reason for this collision.

A post on Reddit that seemingly first released this story took a class warfare angle by alleging "company owner decided to stop paying his drivers so one of them parked their semi on the owners [sic] Ferrari and just left it there." However, this does not appear to be accurate. 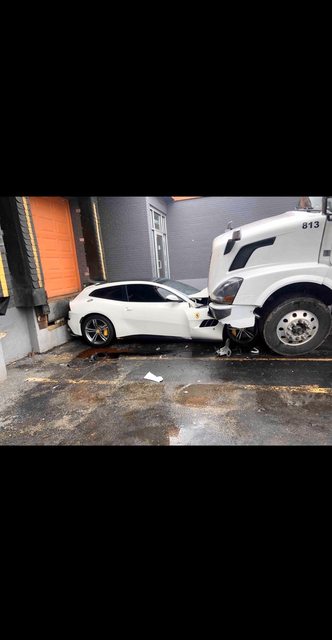 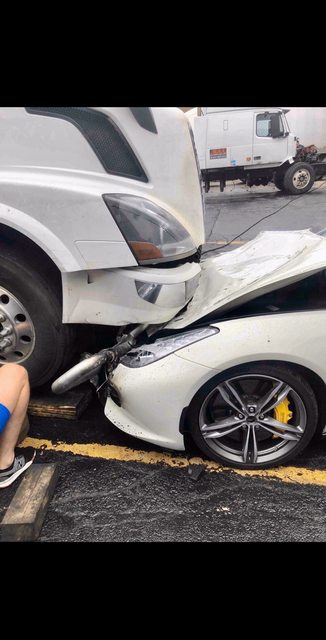 Some great reporting from Tire Meets Road dug into the available details and found social media posts offering other explanations. Rather than being an issue with payment, the semi driver was allegedly facing termination and retaliated by ramming into the boss' Ferrari.

In yet another claim, Tire Meets Road found a Facebook comment from someone claiming to work for this trucking company. The person alleged that the business promised the semi driver a 2020 truck, but a poor performance from the worker purportedly caused this to fall through. Like in all of the other versions of this tale, it ended with the disgruntled worker crashing into the GTC4Lusso.

Judging by the damage, the Ferrari might be repairable, as long as the insurance company doesn't deem the mangled Prancing Horse as too expensive to fix and write off the car. In the pictures, the harm looks mostly cosmetic, but the trail of oil running beside the GTC4Lusso hints at the possibility of more serious mechanical issues.

The semi appears to need some maintenance to the bumper but seems otherwise fine. Given the significant difference in size and weight between the two vehicles, the lack of damage to the Volvo isn't too surprising.