From a long time, Chinese auto makers have been blatantly copying some very popular and well known international models, especially the ones with European origins.

Call it the unquenchable but a very questionable thirst of making the in-house Chinese cars as popular as the models on which they are based, the Chinese majors are shamelessly carrying out the cut-copy-paste job, without seeking the permission from the auto giants of whose model they are taking inspiration from.

While there are so many cars and SUVs which have been launched in China as cheap rip-offs of their very luxurious or popular original versions, we have shortlisted five models starting from a very affordable urban hatchback to an ultra premium futuristic sportscar - inspired from Kia Picanto to Tesla Model X - which in recent times have grabbed a lot of attention. 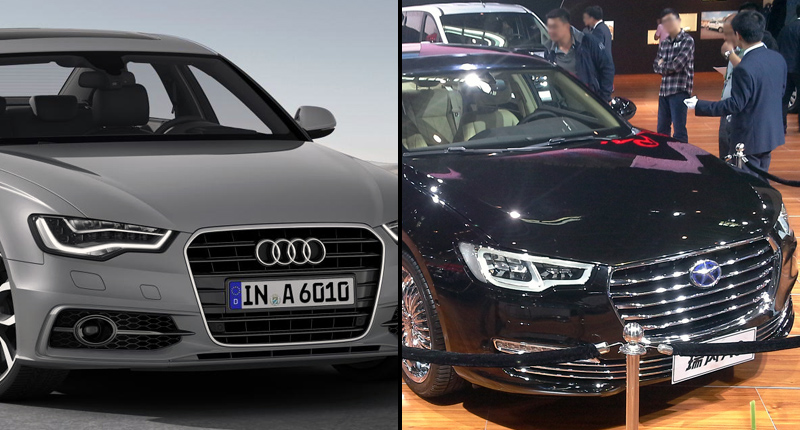 JAC went one step ahead from other manufacturers by not just copying the entire car and its design, but also the name as well. As the name suggests, the JAC A6 has sought its "inspiration" from the Audi's midsize luxury saloon, the A6. Based on the previous generation Audi A6, the JAC A6 borrows a lot from the former in terms of both interiors as well as exteriors.

Talking about the design on the outside, the JAC A6's features slightly redone xenon headlights as well as the hexagonal front chrome grille, which remind you a lot of those of the Audi A6. Step inside the cabin, and the sense of familiarity rises even more, with the overall dashboard as well as features like MMI controllers and gear lever look like those from the early 2000's Audi A6. It is only the replacement of high quality faux wood inserts with the cheap plastic wood, that you can clearly make out that this is not the A6 you desire.

Unlike the V6 set of engines in the Audi A6, the almost 5 meter long JAC A6 is powered by a rather underpowered 1.5 litre turbo petrol, which churns out 170PS of power and 250Nm of torque. 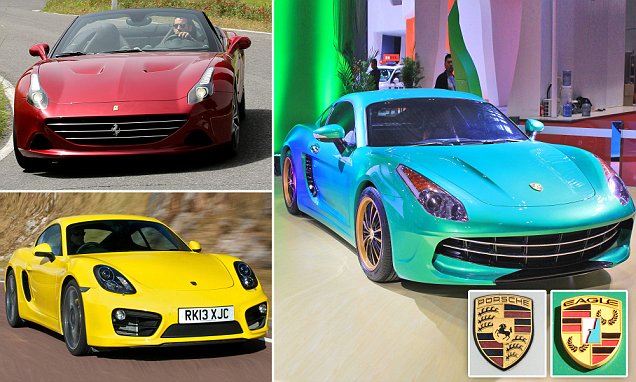 Ever dreamt of having the best of both the worlds of Ferrari and Porsche in a single package? Well, the Chinese auto maker Suzhou is giving you such an opportunity in the form of Eagle Carrie. An instant look at the Suzhou Eagle Carrie is enough to make one believe that it is a blatant copy of both the Ferrari California T and Porsche 718 Cayman.

The overall silhouette, side look and rear profile are completely similar to those of Porsche 718 Cayman, while the front of the Ferrari California T has been lifted off and slapped here, making this car look a bit absurd. Suzhou has also copied its logo from that of the Porsche, with the overall color and design completely ripped off from the original.

Showing some sense of modernity in its packaging, Suzhou claims that the Eagle Carrie is an all-electric "sportscar" which is capable of covering up the sprint of 0 to 100 kmph in just 4.2 seconds.

Up above the world so high – that's what Dezhou was thinking when it crafted, or rather copied the very famous Volkswagen Up! They kept all the copyright and infringement laws below their foot and took their aspirations very up by blatantly copying the Volkswagen's smallest car in its global portfolio.

Unlike the Volkswagen Up!, the Dezhou Weikerui V7 is being offered in only non-gasoline models and in two variants – one LSEV variant and one conventional full electric variant. The Volkswagen Up! is not the only micro urban hatchback that has been ripped off completely by a Chinese auto maker. Even the cutesy looking Kia Picanto has already come under the scanner of Chinese major Yogomo, which has made its own version of the Kia Picanto without seeking permission from the Korean auto giant.

From a distance, one could not sense out the dissimilarities between the two cars, but a closer introspection reveals the actual differences. The tiger-nose grille at the front of the Picanto has been replaced by a rather minimalist looking rounded front fascia. Also, the doors and wheel arches look a bit inconsistent, making one believe that the Yogomo 330 is one half-hearted car.

On the inside too, the dashboard showcases low quality plastics and finish and a design which is partially similar to that of the Kia Picanto. Like the Dezhou Weikerui V7, the Yogomo 330 is not offered with a gasoline motor but has an electric motor under its hood, with two options of a 7.5kW or a 13kW coupled with a lead acid.or a lithium ion battery.

The Model S is one of the cars which has previewed us to how the future mobility would look like. However, the Chinese start-up Youxia hasn't spared even this all electric sedan, and went ahead to make its own version in the form of Ranger X. This four door sedan has got a profile and front and rear ends look very similar to that of the Tesla Model S.

Though, there are some alterations made to the front grille and tail lamp design. The grille has been replaced by a holographic display which showcases the brand's name and logo as a holographic projection. Even the Y-shaped logo looks very similar to the T-shaped logo of Tesla.

The interior dashboard layout also seeks a lot of inspiration from that of the Tesla Model S, with the centre of attraction being the large touch screen in the middle of the center console. Youxia has claimed that the Ranger X is powered by an all-electric motor, which has a range of 285 miles and can run up to 100kmph from standstill in under 6 seconds.