The Grand Tour is here and it was worth the wait

amazongrand tourJames MayJeremy ClarksonRichard Hammond
Well, Amazon, that's what $250 million gets you. The first episode of The Grand Tour has arrived after an extremely long wait and under immense expectations.

But despite the crushing pressure of a major organization and millions of car enthusiasts, Jeremy Clarkson, James May, and Richard Hammond's first outing was an occasionally shaky but very promising.

There are a lot of things in the latter category. For one, the chemistry between Clarkson, Hammond, and May hasn't dampened after being off TV screens for over 18 months. There's a natural flow to the on-screen interactions between these three, and while it's clear they're reciting lines, particularly during the studio segments, the reality is that these interactions are so relaxed the viewer can ignore the occasionally stilted in-studio dialogue. As with Top Gear, the Orangutan, the Hamster, and Captain Slow are at their best in the field.

But while the chemistry is still as natural as ever, the pacing in TGT's first episode is less so. The opening is lovely and doesn't shy away from the controversy that helped birth Amazon's newest property, but we'll admit it's hard seeing where Amazon spent its $3.2 million – it's a neat scene, and includes a giant scorpion statue with a flame-throwing tail, but TGT could have nixed the entire Burning Van rock concert aesthetic and achieved the same thing in the big tent. 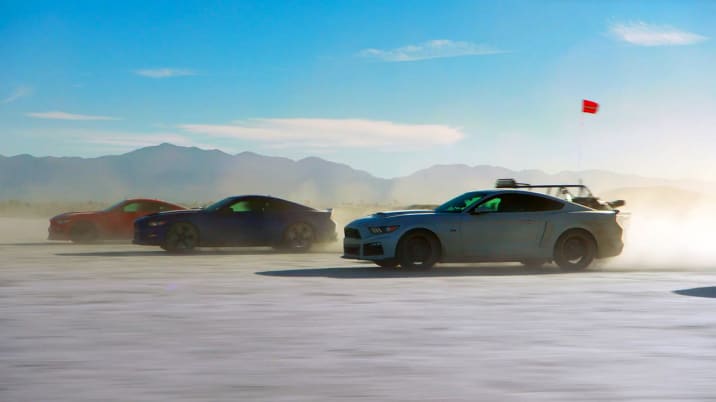 From there, the show follows roughly the same formula as Top Gear. There's an opening, a short review – in this case, the first half of the Ferrari LaFerrari, Porsche 918 Spyder, and McLaren P1 comparison – followed by TGT's version of The News. Now called Conversation Street, it's pretty clear the show is trying to avoid the BBC's legal eagles without compromising a segment that has a big impact on pacing. This week, Clarkson and Hammond focused on making fun of May.

Next up, we visited the show's test track, semi-jokingly called the Ebola-Drome by Clarkson, due to its shape, and met test driver Mike Skinner. Called The American by the hosts, Skinner's favorite things are going fast and calling anything not American, rear-drive, and powered by a V8 "communist." Watching him in this first episode, it's clear TGT is trying to suggest that Skinner and The Stig are cut from the same cloth, even though the latter talks and has a face.

While TGT can't legally run a Star in a Reasonably Priced Car segment, it's still going to have celebrities on the show... provided it doesn't kill all of them. Three stars – actors Jeremy Renner and Armie Hammer, and British gameshow host Carol Vordeman – "died" in episode one's Celebrity Braincrash segment. We still have no idea what's supposed to be happening here – apparently there's some kind of test – but if letting movie stars get attacked by "rattlesnakes" is the point, we suspect this segment is kind of a one-trick pony. At least in episode one, Celebrity Braincrash felt like it was only there to eat up part of the 71-minute run time before airing the second half of the Ferrari/Porsche/McLaren video. 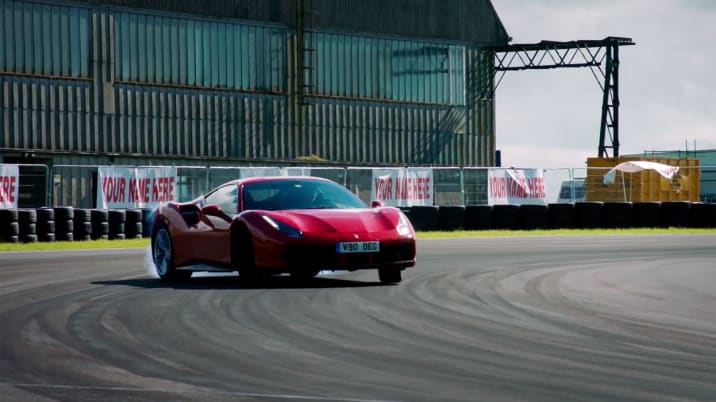 Part of this uneven pacing is simply because this is the first episode – TGT needs to establish its new features and their unique identities, and that takes time. Hell, Top Gear had established segments at its disposal and it still struggled to come up with a unique take after Clarkson, Hammond, and May departed. We gave Top Gear a few episodes to struggle with its pacing before really beginning to criticize – it's only reasonable to do the same with TGT.

The actual content, meanwhile, is precisely what we expect from Clarkson, Hammond, and May. The montage in the opening scene promises some amazing adventures. But episode one was limited to a short segment with the BMW M2 and a hypercar comparison test. Particularly during the comparo, it felt like the show was missing The Stig. What would have been a simple matter of plopping Sir Stiggy in each car meant bringing in Jérôme d'Ambrosio and letting Clarkson manipulate the teleprompters. It seemed clumsy, and we can see the lack of a tame racing driver becoming a recurring problem, unless the team can bring Mike Skinner in on a more regular basis. Beyond that, the hybrid hypercar film was pure gravy, with some ribbing of each host's respective vehicles – the bit with the Porsche and McLaren techs is good – and plenty of smokey drifts.

But while TGT begins the process of refining its formula, it's worth pointing out the new things that worked. One of the biggest is the audience, which serves in the same kind of supporting capacity as Skinner. The audience involvement in episode one extends beyond the yay-and-nay nature of the Top Gear days, although it's not totally free of some cheesiness – the entire segment about the RAF, for example. 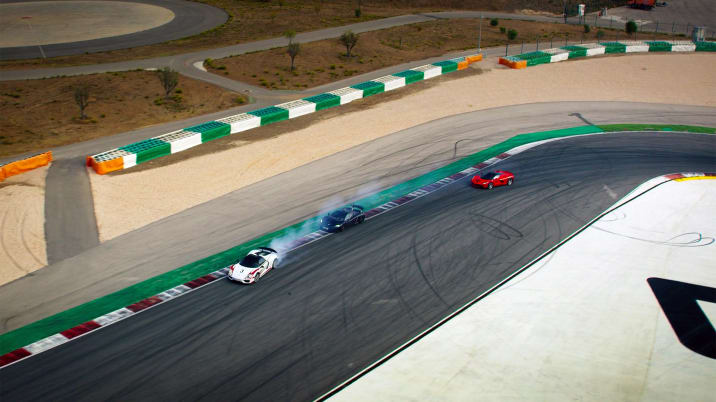 We didn't think anyone could top the beauty of Top Gear – The Grand Tour does. While its direction and general style are broadly similar, it's Amazon's filming demands – 4K resolution, HDR, and a high frame rate – that truly elevate TGT. To give an example, earlier today we used an Xbox One to watch Season 22 of Top Gear on a three-year-old Samsung 1080p TV with a 240-hertz refresh rate – hardly cutting edge tech. We used the same arrangement to watch The Grand Tour, and the difference between the two is staggering. We had to rewatch the opening scene a few times because it looks so pretty. The Grand Tour is truly beautiful to behold – especially if you have a modern 4K/HDR TV – and we can't wait to see how the show looks when it swaps the Californian desert and Portuguese scrub for brighter, more colorful terrain.

While the TGT is undeniably pretty, it's also worth noting a few strange elements with the sound and video editing. For example, that lead image up top? Clarkson never actually removes his jacket. He just opens it up, after attempting to rest his arm on May's shoulder. It's weird and makes no sense – was Clarkson just trying to air out his pits? That along with the occasional sound hiccup – there were a couple situations where the mic didn't sound ready for the hosts to start speaking – are scuffs in an otherwise technically flawless show.

We're cautiously, but also tremendously, excited about The Grand Tour's future. We really do want to tell you much more about this episode, but don't want to ruin test result or the subtle jokes and amusements, including the opening in-studio sequence. We'll be back for all 12 weeks of The Grand Tour, and suggest watching this space next week – the hosts say this is a car show, but that episode two is "an exception." We're looking forward to seeing just what that means.