Sleek and sporty looking on 21-inch wheels, it's a long way from a Leaf

Nissan on Tuesday showed off two concepts at the Tokyo Motor Show that it called the bookends of a new design direction and an expansion of its electric vehicles far beyond the Leaf. The newcomers are the Ariya, a concept EV crossover, and the IMk, an EV urban commuter.

The Ariya was described as having a roomy, premium cabin and a design that signals the "pure, clean nature" of EVs. Twin electric motors are supposed to move it along powerfully, and it's bristling with safety tech. It's seen as the symbol of a future where technology and electric power make for safe, clean travel.

It wears a bold, electrified, illuminated version of the Nissan V-motion grille (since it's an EV and no longer a grille, per se, Nissan is calling the thing up front a "shield.") A subtle geometric pattern is revealed when the nose and Nissan emblem light up, and the "shield" houses radar and other sensors for the ProPilot 2.0 driver assist suite, which even allows hands-off driving in certain situations. When in hands-off mode, the interior lighting changes to keep you aware of that, in case your hands off the wheel weren't evidence enough.

The Ariya's date for the evening onstage was the Nissan IMk urban EV commuter concept, details of which we shared when it was revealed earlier this month ahead of the show.

The crossover has dual electric motors front and rear, with all-wheel drive torque splitting that Nissan says is derived from the GT-R and the Nissan Patrol. Details about power, torque and driving range weren't shared at the reveal, however.

The Ariya has the short overhangs and pushed-out wheels of an EV and lounge-y interior of the Nissan IMx concept from the 2017 Tokyo show. The Ariya rides on 21-inch wheels housed in flared fenders and has a distinctive raked C-pillar and even a rear wing. A one-piece light blade crosses the back. The Ariya is done up in deep Suisei Blue, which looks matte from a distance but contains embedded glass flakes that, Nissan says with a flourish, "produce billions of light refractions, reminiscent of a comet crossing the night sky."

Finally, the whole package has accents of copper as an homage to Japanese craftsmanship.

Inside there's the flat floor, thin-frame seats and open interior common to EV concepts, with a minimalist dashboard and glowing, haptic touch controls. Few traditional controls, such as the start button, remain. The leather seating has copper showing through its perforations that complements the exterior accents, and there are satin copper-colored aluminum bits elsewhere in the cabin.

Though the 2017 IMx concept it's derived from had far-out features like a disappearing steering wheel, Nissan says the Ariya is closer to reality, a design that could make make it into production soon. In fact, Nissan was showing a version to dealers last month. 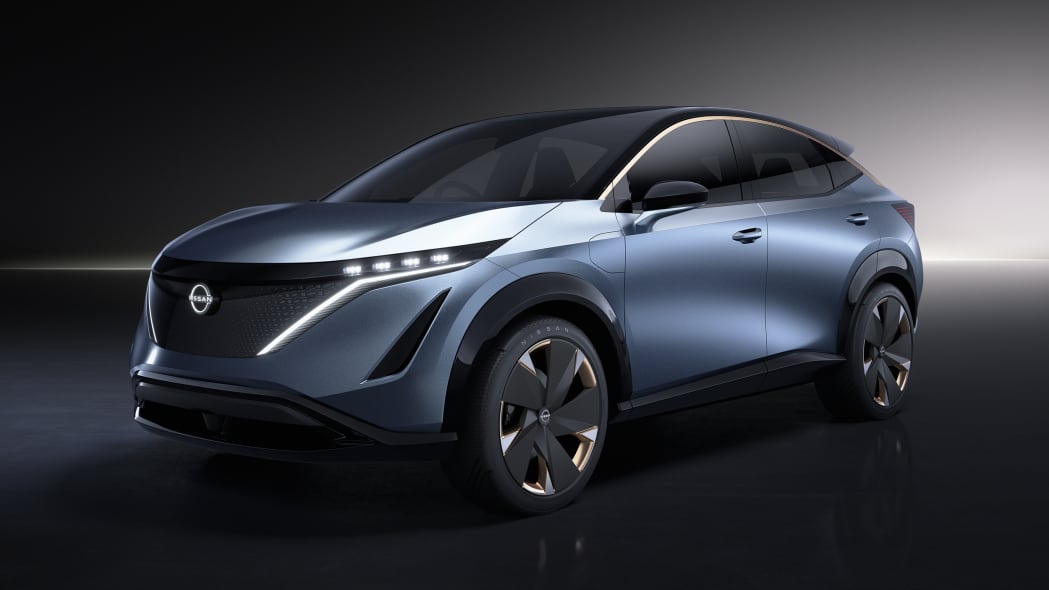 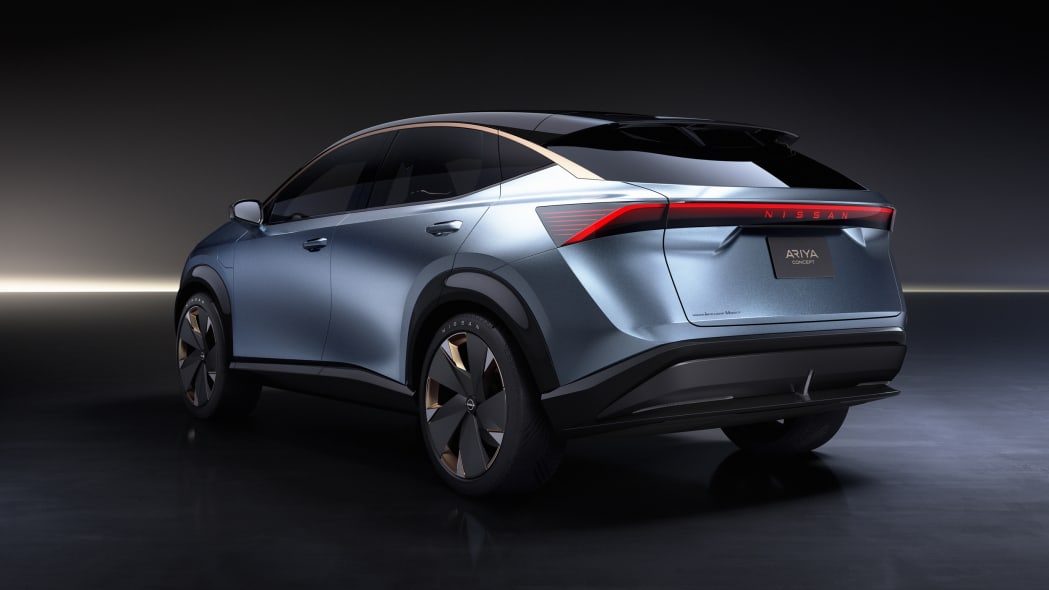