Hammond, who was in Switzerland filming Amazon's "The Grand Tour" was flown to hospital in St. Gallen after the electric supercar he was driving crashed and then burst into flames.

Hammond's co-host, Jeremy Clarkson, said that it was the "biggest crash I've ever seen and the most frightening." 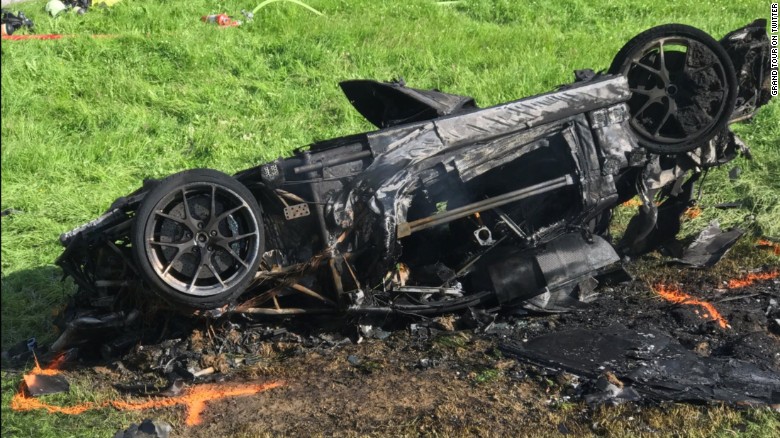 Speaking from his hospital bed Sunday, Hammond confirmed he would require knee surgery in a video broadcast by Drive Tribe.

"I would like to thank all of the medical professionals who got me by air ambulance from the crash to the hospital and who have dealt with me ever since," he said.

Hammond also apologized to his wife Mindy, and two daughters, Issy and Willow.

Hammond was injured when he crashed while driving a Rimac Concept One, an electric supercar built in Croatia, the makers of "The Grand Tour" confirmed in a statement on Saturday.

They said Hammond was involved in a "serious crash" after completing the Hemburg Hill Climb.

"Richard was conscious and talking, and climbed out of the car himself before the vehicle burst into flames," said the statement.

"He was flown by air ambulance to hospital in St. Gallen to be checked over revealing a fracture to his knee. Nobody else was in the car or involved in the accident, and we'd like to thank the paramedics on site for their swift response. The cause of the crash is unknown and is being investigated."

"The Grand Tour" posted two photos on Twitter of the car involved in the crash. They showed a mostly charred vehicle that had flipped upside down.

This is not the first time Hammond has been injured while filming.

In 2006 he nearly died after losing control of a Vampire dragster which he had been driving at speeds up to 288 mph (463 kph).
He was in a coma for two weeks but made a full recovery.

Earlier this year, Hammond also admitted to have suffered injuries after falling of his motorcycle while filming in Mozambique.