Motorists are expected from today to get their Driving Licence Counterpart (DLC) in police stations. If things become clearer and that the authorities want to implement this measure as soon as possible, drivers are themselves not necessarily ready.

In addition to the ticket, very soon, points will be allocated to each fault motorists on the road. Once the limit is reached 15 points, the driver will forfeit his license. This law was passed in July, but will only be effective from April.Its entry into force is much talk. That said, Mauritians are not necessarily aware of what awaits them.

The penalty points is a wave alert for some. "I can not control it all again. Besides, I have not really kept pace. I learned of an email that my colleagues are circulating that the DLC will recover between February and March.Frankly, I do not know how many points are removed for a particular offense ... I expect that things really take shape and, with time, I will get used to it. But it's a good thing the license points, "says Yanis Husson, executive and holder of a driving license.

That is not to everyone's taste. Arvin Napaul, private sector employee, think Maurice would not have adopted this system. "It should be a good way for us to get money ... I'm confused ... And I do not think it will really reduce crime.Rather it will create frustration on the part of drivers, "said the young man.

Beatrice Latreille, for his part, said he listened to the radio and think it is a very good initiative. "People would be more cautious driving with the introduction of penalty points. That said, I confess that I have not understood everything yet. I know it takes away points depending on the offense. However, once in force, it should be easier to know what it entails, "says the driver. But Maurice is ready for this? Dev Nathoo, the Traffic Management Road Safety Unit, has spoken on Radio Plus. "There are many things to put in place as the" penalty points system management "on Ttraffic Branch. There is also the distribution of Counterpart Driving Licence (DLC). ' 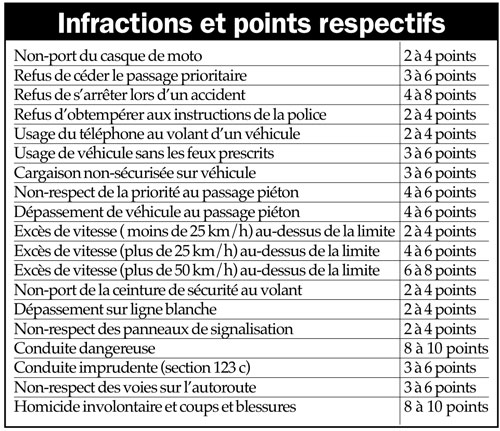 But what will it really? Inspector Mohit Ramah, the Traffic Branch, explained that "the system will be introduced in Mauritius will be a cumulative system. This means that a person will begin with the counter. As to commit that offense, the counter increases. "It should be noted that the maximum threshold is 15 points. Anyone who holds a learner will have a maximum of 10 points. The inspector also explains that when the limit is reached, the driver will have their license suspended for a period of at least six months. "It is the Court that decides the duration of the suspension," he says.

Allowed points in France ...
Twenty years after its introduction on 1 July 1992, the penalty points against him continues to gather virulent critics. While road safety stood in April 2010, a review of the device extremely encouraging, it was raised by many defense organizations motorists symbol of "repressive policies" of successive governments in road safety, alongside safety cameras and speed limits considered abusive.

Introduction in 2010 of the balance of penalty points, Road Safety compares the downward trend in road deaths in the upward trend in the number of points removed. "Since its inception in 1992, the system of penalty points has reduced by more than half, the number of people killed on the roads of France," can be read in this document. Therefore, considering that people continue to die every year on the roads, "the penalty points is essential for the continuation of the fight against road safety," added the authors of this report.

A correlation that fails to convince motorists advocacy groups, for whom "all repressive" symbolized by the automatic withdrawal of points based on the offenses defined by the rules of the road is not a factor in the decline constant mortality on roads.