The Rule-Breaking Superyacht Adastra Looks Like a Spaceship on Water

boatsuperyachtyacht
In Latin, “ad astra” means “to the stars.” You may already be familiar with the phrase, given Brad Pitt’s 2019 movie of the same name, which earned him wide critical acclaim. This Adastra won’t take you to the stars, but it definitely looks like it could.

Adastra is a power trimaran unlike any other superyacht out there, a rule-breaker in every sense of the word. It was built for exploration, with a clear focus on strength, stability, fuel efficiency and weight reduction. It excels on all counts and it’s also a stunner – and no, this isn’t just a polite way of saying this yacht is nice to look at.

There is no other superyacht like Adastra because it was designed to be outstanding. Shipping magnate Antony Marden commissioned it with British designer (and good friend) John Shuttleworth and had it built at McConaghy Boats in China. It took him almost 7 years to take ownership of the 140-foot superyacht and he’s been traveling the world with it ever since.

In early 2019, Marden listed Adastra for sale. As of the time of writing, it is still available, for an asking price of $12 million, way below the reported cost of building it, $20 million. In an April 2019 interview with Superyacht Times, Marden noted that he didn’t expect to find a buyer too quickly, because the trimaran was small in size and ideal for long-term exploration, and not many millionaires are in the market for this particular combination.

“Because she’s actually quite small, there are only three cabins so she is very different from a superyacht: it’s more like a family sailboat operation,” Marden explained. “It’ll probably be quite a long campaign. I wouldn’t expect her to be sold quickly, because there are only a certain number of people who want to buy, out of that number, half of them aren’t ready and half of them don’t have the money: there are too many variables to expect her to be sold quickly.”

Indeed, compared to what we usually refer to as a superyacht, Adastra is “quite small.” It can accommodate up to 9 guests in 3 cabins and a crew of 6, and rooms are small and cozy, with the exception of the master suite and the shared living room. All the interiors were done by Jepsen Design and stand out for practicality, comfort and elegance, through a combination of curved shapes, expansive glazing and smart use of all available space.

Unlike with modern superyachts, Adastra doesn’t come with a fully-equipped gym, sauna, pool or touch-and-go helipad. It does come with panoramic views in all cabins, a large sunbathing area and a garage whose folding door opens into a diving platform. That said, whatever points it may lose on the luxury side, it more than compensates with a high grade of efficiency.

Adastra is incredibly lightweight, weighing just 49 tons before water and fuel. The hulls are formed from e-glass / Kevlar foam sandwich, while the deck and superstructure are made of carbon fiber and Nomex honeycomb core. Everything on board was custom built, from the ladders, hatches and portlights, to the unique anchoring system that operates three anchors.

Because of its hulls, Adastra is so stable it can literally sail out in any weather without issue. Speed is also constant in all weather, with a cruising speed of 17 knots. To achieve it, Adastra uses a single 1,150 hp Caterpillar C18 straight-six turbo diesel engine, with two 110 hp Yanmar diesel engines for backup.

“Firstly, there’s her seaworthiness: we can go to sea in almost any condition,” Marden said in the same interview. “We’ve left marinas in the middle of the night into a howling gale and people are aghast! The big white yacht people would never dream of going out in these conditions, but Adastra is pretty bloody good. She can muscle her way through pretty much anything.”

As the cherry on top, Adastra is also very fuel-efficient, which makes it ideal for adventures around the world. The trimaran can cross the Atlantic twice before needing to refuel, and comes with a transpacific range of 10,000nm. 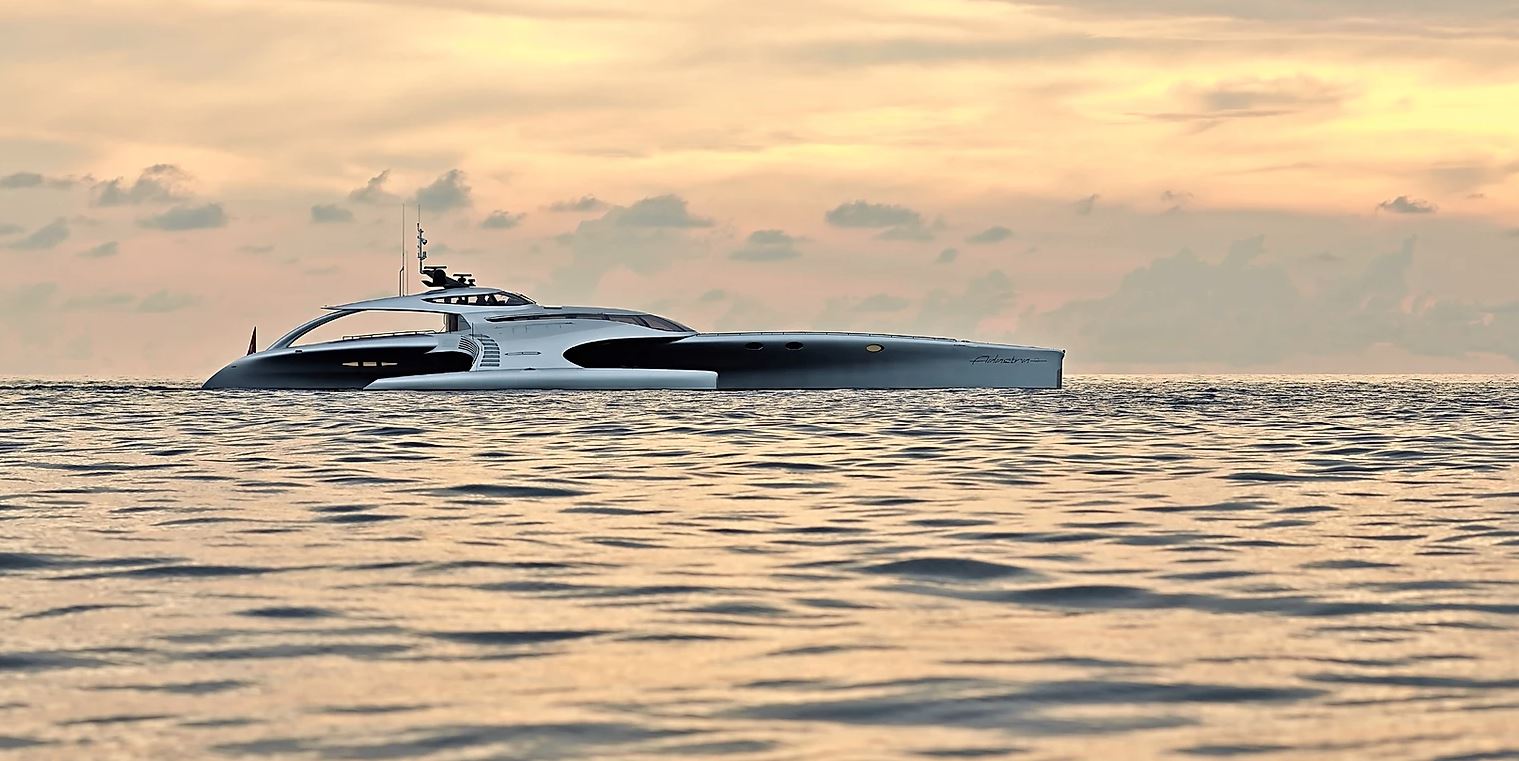 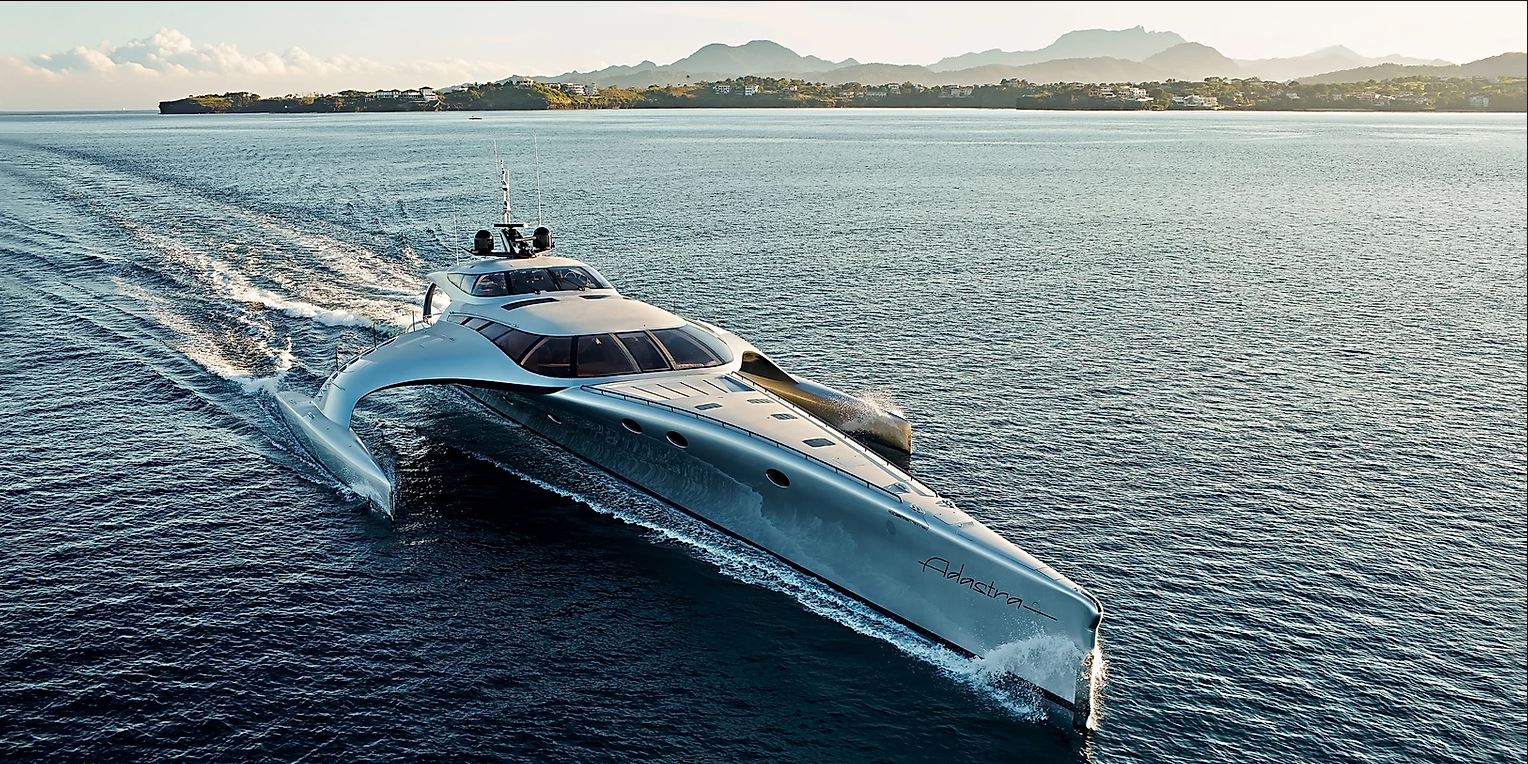