Six 'Shut Up and Take My Money' Cars

bmwcadillacfiathondajeepsubaru
Any time you see this iconic moment in pop culture – Shut up and take my money! – posted in response to a new car reveal, rumor for an upcoming model or even lip-service to a vehicle that should exist, you can bet there's some intrinsic good in the idea.

Though depending on the person offering up the cash, that good could take the form of extraordinary form, functionality, weight savings, power, handling, etc. You get the idea.

In fact, when I first proposed this list, I reached out to the Autoblog staff to help me brainstorm. Here are some of the ideas they offered up that I ultimately didn't use: Jaguar XE Coupe, Pagani Huayra Roadster, Mercedes-Benz S-Class "parade car" (cabriolet), Morgan 3-Wheeler with Ducati V-twin, Ford Transit Connectamino (pickup), Mercedes CLA63 AMG, Ford Fusion 5.0, BMW i8 Spyder, Lexus RC-F Shooting Brake, Volvo XC90 Polestar. Oh, and things we collectively wanted to stick Dodge's Hellcat in were almost as numerous as models that Fiat Chrysler Automotive currently makes (though none quite so compelling as the Grand Cherokee you see above.)

Ultimately though, while I used a couple of ideas from my colleagues, the list of cars I'd shell out for unquestionably is very personal. Though it isn't complete, what follows is a selection of cars whose very existence would prompt me – or the trust-fund-baby versions of me – to utter without hesitation: "Shut up and take my money."

BMW North America has done driving enthusiasts and car nuts a few favors over the years. For all the vitriol the company gets for its often-in-flux naming schemes, BMW's love of the niche means products like small coupes, diesel station wagons and performance cars with manual transmissions can still be had here in the US.

So, why not increase the niche with a race-ready station wagon?

Toss the M3/M4 turbocharged 3.0-liter I6 engine under the hood of the 3-Series Sport Wagon body, complete with all 425 horsepower and 407 pound-feet of torque, and you'll see the hottest grocery getter this side of The Mercedes-Benz E63 AMG Wagon. Keep things simple and leave on the xDrive all-wheel-drive system (which both 3er wagons have as standard), and you're looking at a sure-footed rocket sled with a starting price around $65,000. That's not chump change, but for a package that does everything well, I'd push over my stacks of cash.

I've always been a supporter of the quirky Honda CR-Z. But as a recovered Honda fanboy, I can also understand the frustration with its mild performance letting down the new-generation-CRX potential.

What's the solution? Taking out the CR-Z's mild-hybrid drivetrain and replacing it with the naturally aspirated, 205-horsepower, 2.4-liter four-cylinder from the Civic Si seems to be the answer Honda heads have been screaming for. The CR-Z Si would (probably) net out with a power-to-weight ratio akin to a Ford Fiesta ST that, coupled with Honda's Teflon-smooth six-speed manual transmission, would vault the coupe into the top of a lot of hot-hatch consideration lists – especially if it looked at all like the Mugen RR concept seen above. 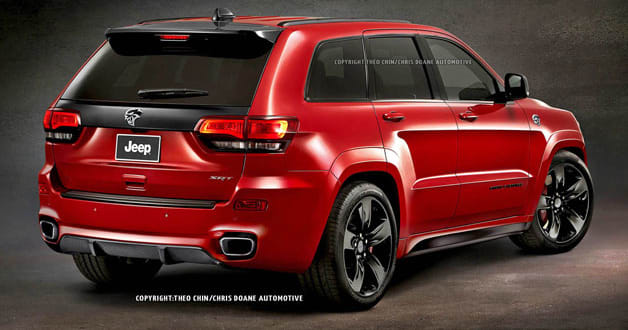 Soon after my review of the Dodge Challenger SRT Hellcat lifted off, there were dozens of comments that the Fiat Chrysler Automotive brain trust needed to put the 707-horsepower, supercharged monster-V8 into the fan-favorite Jeep Grand Cherokee. I was immediately won over by the idea.

Considering Jeep's history of STR-ing the GC, and the fact that we already have a Hellcat Charger, I'd say this is one Take My Money car that has legs.

Start saving though; it's a good bet that that Grand Cherokee iteration would be the dearest 'Cat yet. With both the Charger and the Challenger SRT cars starting in the low sixties, it's not implausible that the Hellcat Jeep could run $70k-$75k to start. That price would make it competitive with the Porsche Cayenne S, but with an advantage of nearly 300 ponies. Deal.

I'm confident in speaking for both myself and the rest of the Autoblogers when I say, we love the Subaru WRX. Our long-term Scoobie has already been checked out for more than a handful of road trips, and basically every other test period we've had with the car has been followed with comments of satisfaction.

Hell, we don't even hate the CVT.

What I can't abide, nor begin to fathom, is the lack of a five-door model from the WRX range in North America. The WRX wagon (as seen above in historical splendor and STI fettle) has been the darling of the range during its history on this continent as far as I'm concerned, with just enough added practicality to make the Subaru an almost-perfect combination of practicality and pleasure.

Ding Fiat's electrically powered 500 hatch for having too high a sticker price and for only being offered in The Golden West, if you must. But don't let those arguments keep you from the facts of the 500e being a riot to drive around the city and offering great overall range (87 miles) in a pocket-sized package.

To my mind, the biggest downside to the 500e is that its appeal is primarily limited to single urbanites because of the cramped confines beyond the front seats.

Now, throw the 500e's electric powertrain into the bigger, airy-cabined, slightly goofy looking 500L, and you may just have a family friendly urban vehicle that has a niche all to itself.

Trade off a bit of range for room in the caboose, and the theoretical 500Le becomes a versatile electric box on wheels that one-ups things like the Leaf and Volt when it comes to school runs and Home Depot visits. Make your fantasy look like a Jeep Renegade EV, if you prefer.

After replacing a traditional powertrain with an electric one in the preceding Fiat, I'd like to, with a few strokes of my keyboard, do just the opposite now.

I'm no hater of the Voltec powerplant in the Chevy Volt, but it's clear to me (and all but a few hundred buyers) that it simply isn't potent enough to live up to the slick looks and bloated price tag of the Cadillac ELR. Still, the Caddy coupe looks so good, why waste the design?

Cadillac may even be working on a hotter ELR, as evidenced by the spy shots seen above, but I don't think tweaking goes far enough. Instead, replace the plug-in power with the killer twin-turbo, 3.6-liter V6 from Cadillac's parts catalog, and give the ELR a "-V" suffix to go with its 420 horsepower and 430 pound-feet of twist. The resultant coupe would be lighter, faster and, to my mind, a hell of a lot more desirable than the reticent ELR electric. The swap – as unlikely as any I've suggested on this list thus far, though it may be – would almost be enough to make the coupe justify its $75,000 sticker, too.