VW Golf R Used in Most Fabulous Heist of Our Times: Stealing a Solid Gold Toilet

funnyuk
This is perhaps the most fabulous and hilarious heist of recent times: a fully-functional toilet made of solid gold was stolen in mid-September and police are liking whoever was traveling in a blue Volkswagen Golf R as suspects.

Before you laugh, know that the toilet was a work of art. Named "America," it was on display at Winston Churchill's birthplace, Blenheim Palace in Woodstock, Oxfordshire, England. Its value has been estimated at £4.8 million, which is roughly $5.9 million at the current rate exchange, and yes, visitors of the exhibit could go number 1 or 2 in it, which is why it had been fitted for plumbing.

The thieves came and stole it at nighttime, ripping it from the floor and causing some flooding in the process, ITV says, citing sources with the Thames Valley Police. Though police have arrested 2 suspects in the theft, they're also looking for whoever was driving the blue VW Golf R, believed to have been used to transport the toilet.

At the same time, police believe 2 separate vehicles were used. The Golf was fitted with fake license plates, which is why police are asking for the public's help with this.

"The vehicle, a navy blue Volkswagen Golf R, remains outstanding, and I am appealing to anyone who recognizes it, or may have seen it in or around Woodstock near the time of the incident," investigating officer, Detective Inspector Steven Jones, tells ITV. "It is believed that it was displaying cloned plates."

"Also, I would appeal to motorists with dashcam footage in the area to review it and check if their camera has captured anything significant, or this vehicle itself," Jones says. "The stolen artwork has not been recovered, but officers are working to retrieve it. Anyone who has any information regarding its whereabouts is asked to get in touch with police. We have been made aware that a substantial reward being offered by the insurers for the safe return of the property subject to specific conditions."

We are continuing to appeal for information following a burglary which occurred in Blenheim Palace, Woodstock.

A high-value golden toilet was stolen. 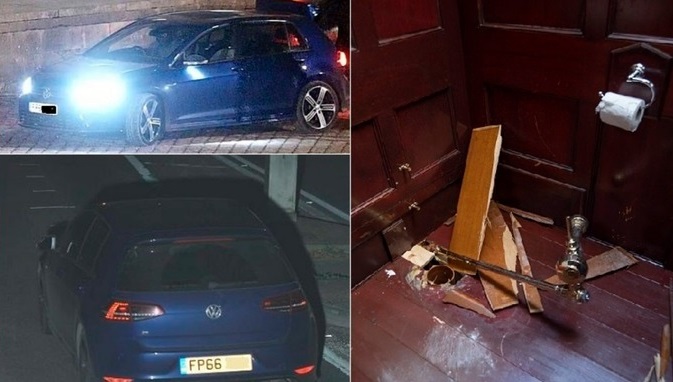