How cute is that?

It's not uncommon to hear automobile enthusiasts wishing that carmakers would bring back classic models with updated, modern-day tech. It's rarely profitable for companies to do that, and current requirements demand much from crashworthiness and emissions technology, but sometimes something quite awesome slips through. Look at what Renault has done, for example.

The Renault e-Plein Air is a fully electric re-creation of the classic Renault 4 and 4L "Plein Air" open-top version. The late-1960s original was reportedly designed to fulfill the needs of the military, even if it actually ended up as a beach car in the style of the Fiat Jolly instead. Now, a short-wheelbase retro version again meets the demands of the era: something simple, fun, classic-looking and most important, electric.

Underneath the bathtub-like, ever-so-slightly updated bodywork are the electrified mechanicals of the Twizy city car, itself more like an amalgam of an electric bike and a car, good for 62 miles of range. The e-Plein Air is done in the same style as Citroën's e-Mehari, which is in actuality a re-bodied Bolloré Bluesummer EV, but it wears a Citreën Cactus lookalike body and takes a few notes from the style guide of the classic Mehari. While the e-Mehari is an actual production vehicle you can buy today in France, the e-Plein Air is more of a concept, done to both honor the original 4/4L and to show what Renault, its Classic division and parts specialist Melun Rétro Passion can do. There are original Renault 4 parts on it, like the steering wheel and dashboard with the characteristic "umbrella" handle gearshift, but the gauge cluster is now digital.

But not only do we love the e-Plein Air, we also wish it would make at least limited production and would invite other carmakers to create similar nostalgic re-creations of their classic models, tongue-in-cheek. While the mechanical symphony of a beat-up original "Quatrelle" is a thing to behold, seeing the same shape move with electric power is not a bad thing to imagine. 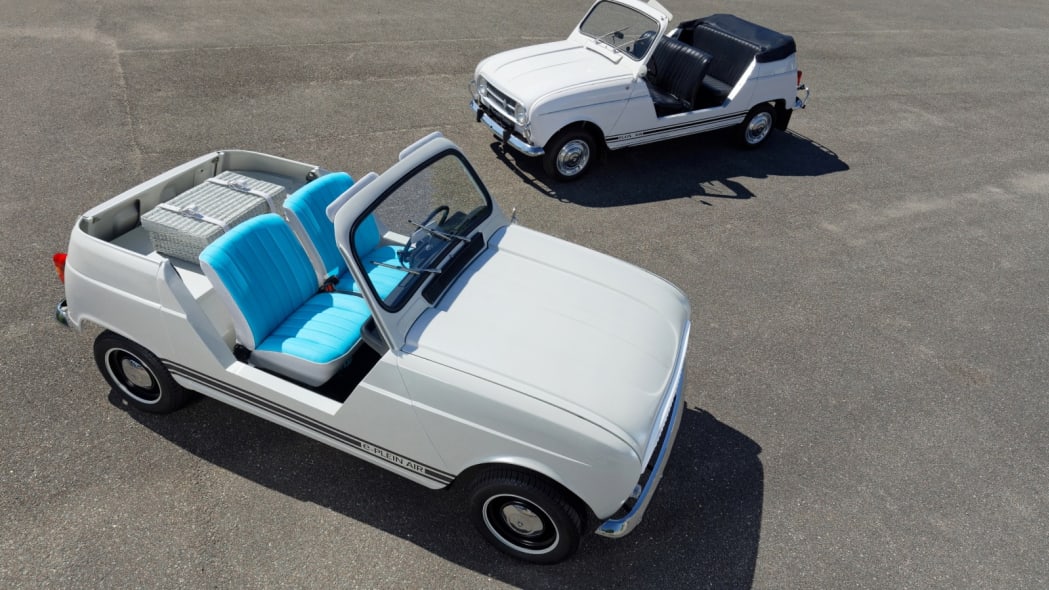