Strand Craft’s Miami Superyacht Is Green, Fancy and Can Double as Rescue Vessel No need to sacrifice luxury for a clean conscience, or either for the sake of knowing your boat can weather any storm and get you back to solid ground safely. Strand Craft proposes to deliver the ultimate superyacht in all respects, with the new Miami concept.

The yachting industry is not the greenest around, to put it mildly. This explains shipyards' vested interest in using greener technologies, in a bid to keep up with demand while minimizing the impact on the environment. Hybrid propulsion is already becoming common, but builders are also looking forward to using only electric propulsion.

The Miami superyacht concept, from California-based designer Kurt Strand of Strand Craft, falls in the former category. Its hybrid propulsion would considerably cut down emissions, while delivering the same performance as that of a diesel-powered vessel.

Where Miami stands out, though, is versatility. Not only is it a luxury superyacht, packed with the standard stuff you see on ships of its category (gym, spa, bar, jacuzzi, the likes), but it also aims to be the toughest cookie around. Strand imagines it able of withstanding all weather conditions and, if need be, even double as a proper rescue vessel, to be used in the most adverse situations. Win-win all around.

For the Miami, Strand drew on inspiration on the devastation Hurricane Dorian caused in the Bahamas, imagining a luxury yacht that could effectively be used in rescue efforts. For that, it would have to be storm-proof and big enough to be able to carry supplies, machines or passengers, depending on the situation.

Measuring 436 feet in length and 65 feet in width, the Miami would also be a perfect explorer yacht. That is to say, when not used in rescue missions, it could be used by the owner or charted to interested parties to carry out research in far-out regions of the world.

The rest of the time, the Miami would function as a "regular" superyacht. Described as an "explorer yacht for the adventure seeking" in a brief interview with The Robb Report, the Miami has plenty of amenities and more than enough space to take up to 20 guests and a 44-member crew on the wildest, most fun adventures.

Speaking of fun, Miami comes with a three-story nightclub with glass flooring (because one-story nightclubs are so yesterday), an open area jacuzzi and several lounges, a fully-stocked gym and spa, wine cellar and bar with a 20-foot TV, and a sky-bar situated 66 feet above the water line. The owner gets his own 985-square-feet master suite that boasts an 180-degree view, with a personal office and library.

Because this is a "green" superyacht, only the finest, highest-quality vegan leather will be used throughout. Recycled wood, steel, aluminum and plastics will also be used, while solar panels will power interior LED lights and features.

For convenience and more fun options, the Miami will come with two onboard helicopters with hangers below-deck, two 58-foot tenders, plenty of storage for other water toys, and two Mercedes-AMG G 63s. No one said you have to have fun only on water.

The Miami is "designed to push the development of new, more environmentally friendly yacht or ship propulsion systems forward," Strand tells the same media outlet. So it's powered by three electric azimuth pods driven by hydrogen-fuel-cell generators, with diesel generators and saltwater batteries for backup. Top speed is estimated at 20 knots, and cruising speed at 16 knots. Strand says estimated range would be of about 8,000 nautical miles.

"Miami is the ultimate explorer yacht for an active lifestyle and adventure seeking," the designer says of his latest concept. "It is designed to handle the most extreme weather conditions and can be transformed into a rescue vessel for emergency operations in disaster areas."

In fewer words, the Miami aims to be the superyacht that can do it all. If you think it sounds too good to be true, you should also know that Strand estimates the final cost will be of about $700 million. So yes, all this could be achieved with one single vessel. 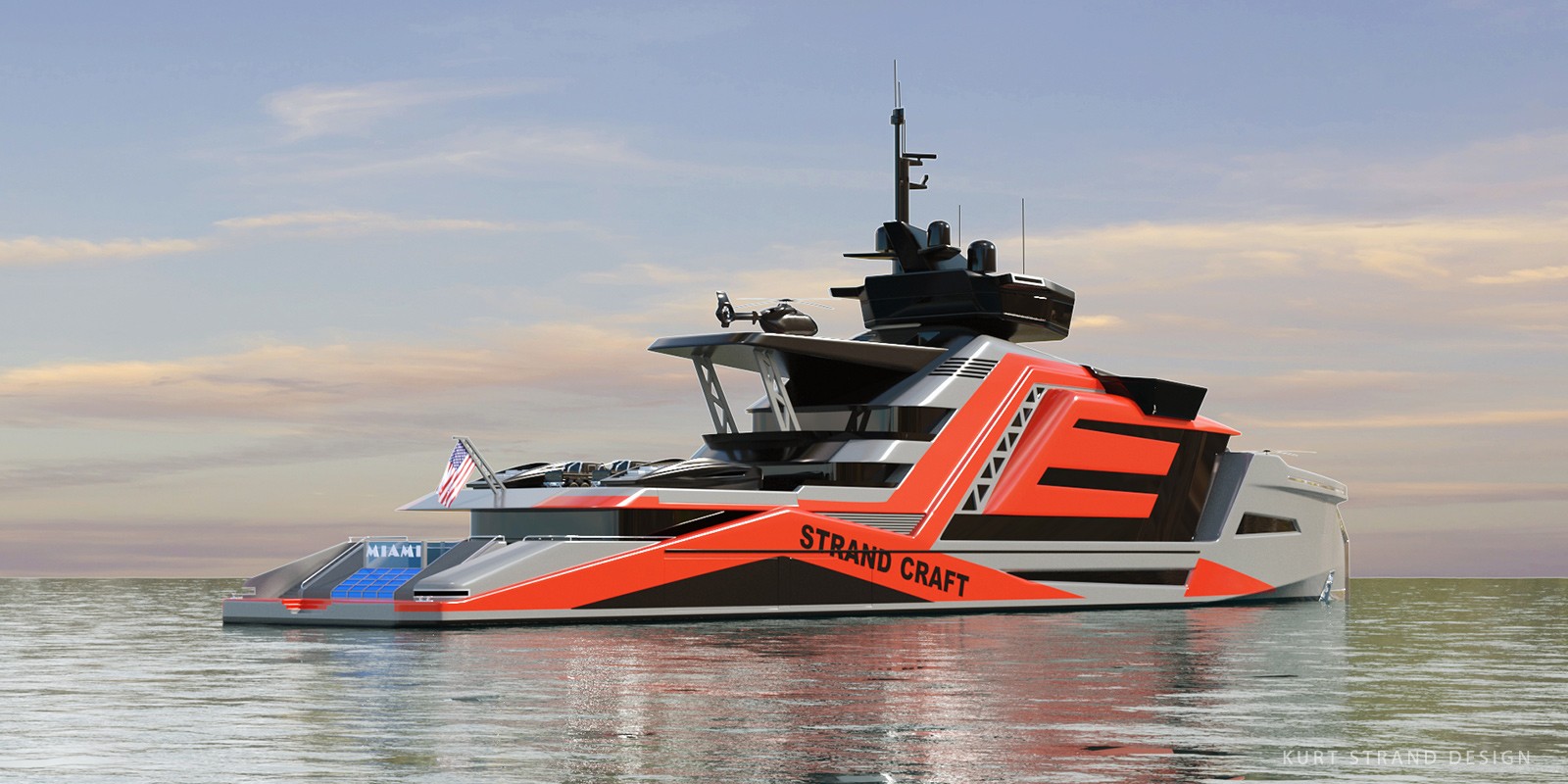