Hustler facelift gets slightly updated exterior and interior; A 2-door mini-car concept with a canvas top; Powering the Air Triser is a hybrid drivetrain; Ignis gets the SHVS mild hybrid technology.

The Suzuki Hustler facelift and a hybrid version of the next generation Suzuki Solio have made their world premiere at the 2015 Tokyo Motor Show today.

The Suzuki Hustler facelift incorporates the J STYLE II styling-and-equipment package and new pop-art colours, which include yellow, green, and ivory for the body and a contrasting black roof. It features a front-bumper garnish, a metallic-look grille, and a gloss black-finished dashboard.

As for the Suzuki Solio Hybrid, it is based on the latest Suzuki Solio that was launched on September 3, 2015. It packs a new hybrid system that allows electric-only propulsion, where the electric motor supplements the engine during acceleration. The hybrid system is paired to Suzuki’s Auto Gear Shift system.

The 2016 Suzuki Solio is based on a new lightweight platform and measures 3710 mm long, 1625 mm wide and 1745 mm high. The wheelbase is now 30 mm more than the previous model, with the weight also going down by a commendable 100 kg in the regular model. Suzuki has taken the wraps off the Suzuki Mighty Deck Concept, which combines urban and outdoor styling into one concept study.

It features Suzuki’s quirky styling seen in most of their JDM products, sporting wide-eyed triangular DRLs that enclose the headlamps, black plastic bumper with a bold chrome accent and wooden skid plate.

The rest of the exterior is finished in a bright yellow, while the A-Pillars are painted black for a floating roof impression. It measures 3395 mm in length, 1475 mm in width and 1540 mm in height.

Not much has been divulged about its interior or equipment, save for an automatic raise/lower function for the open load deck. The interior gets a generous helping of wood and silver trim, and has a freestanding display, 2-spoke steering wheel, and a transparent instrument display on the upper dashboard.

It’s likely that the Mighty Deck Concept will remain a concept; serving as an instance of what the Suzuki design team is capable of. 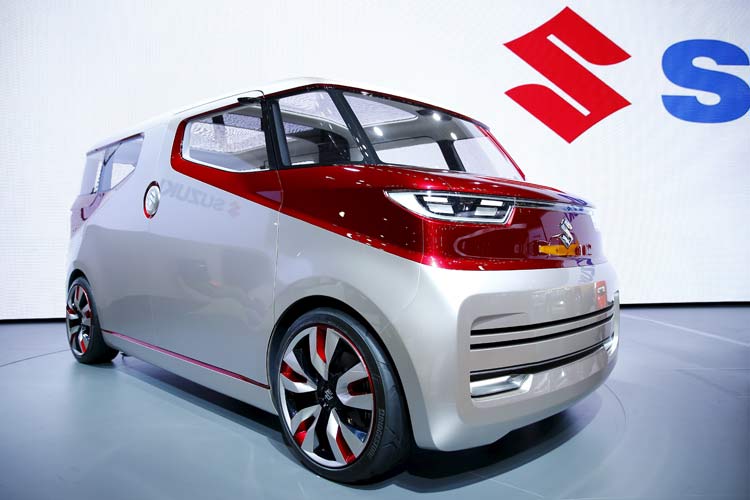 The side doors slide in opposite directions, offering effortless entry and egress into the cabin. Being a concept, Suzuki has gone all out with the materials and design for the interior. It has a complete wooden floor with a grey dashboard, transparent instrument display, a tablet-esque infotainment screen, and generous greenhouse for an airy cabin.

There are seats across three rows which can be folded individually and arranged to offer a “private lounge” seating. A separate display is located on the thick B-pillar of the van for entertainment controls.

Powering the Air Triser is a hybrid drivetrain that combines a 1.4-liter petrol engine and electric motor(s), which is paired with a 5-speed automatic transmission. An electric AWD system is also available.

Suzuki has conducted the world premiere of the Suzuki Ignis at the 2015 Tokyo Motor Show today. Based on the iM-4 concept which was revealed at the Geneva Motor Show this year, the Ignis marks Suzuki’s entry into the compact-crossover segment, the company said in a statement.

Suzuki is yet to reveal the detailed technical specifications of the Ignis, so the recap here is based on what was reported earlier. The Ignis is reported to measure 3,700 x 1,660 x 1,595mm (length x width x height).

Under the hood, the Ignis is reported to pack a 1.2-liter DualJet petrol engine with the SHVS (Smart Hybrid Vehicle by Suzuki) technology, paired to a CVT gearbox. It will come with a standard front wheel drive layout and optional 4WD.

According to Suzuki, the Ignis will offer “versatility for daily life and leisure”, with a high view point, sufficient ground clearance and capability to go on snowy roads and rough tracks. Apart from the Ignis, the India-made Baleno is also making an appearance at the Tokyo Motor Show.

Sources have confirmed to Indian Autos Blog that Maruti plans on launching the Ignis in the near future, though a launch in 2016 remains a question mark.