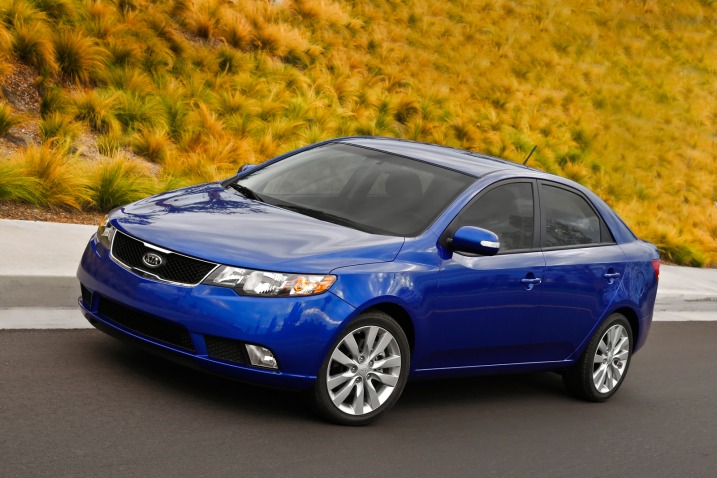 The Forte lineup still consists of three distinct models: Koup, sedan and five-door hatchback. There are no changes to the exterior for any of the body styles, and interior changes are few. A standard telescoping steering wheel has been added to the middle-level EX trim for all Fortes, and a new gauge cluster is part of the EX Technology package. Lastly, the five-door is only available with an automatic transmission. 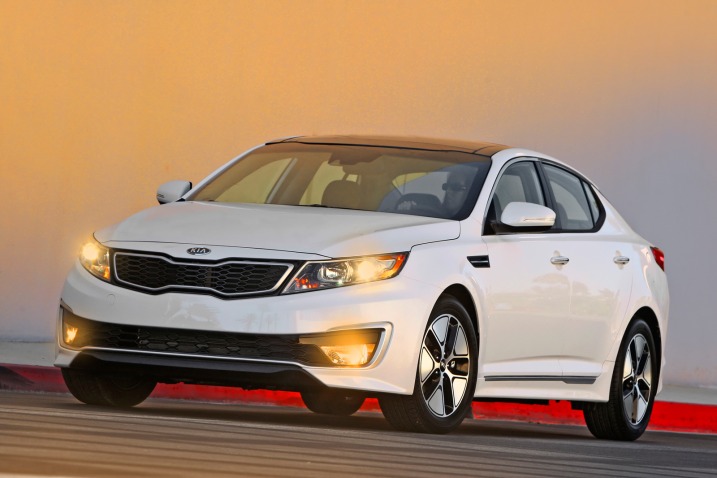 The midsize Optima sedan was all-new for 2011, so the 2012 model gets little more than packaging tweaks. The entry-level LX trim now comes with standard chrome-accented exterior door handles, foglights, heated outside mirrors and automatic headlights. The EX model gets standard LED taillights as well. Silver wheel caps replace the black caps on all 16- and 17-inch wheels.

Inside, the Optima receives a revised center fascia finish, and the EX sedan gets new wood and metal trim. Lastly, Kia has removed the Infinity audio system from the Technology package, and now includes the eight-speaker Infinity system, the Uvo in-car hands-free entertainment and communication system package, HD radio and power-folding outside mirrors in the Premium package instead. 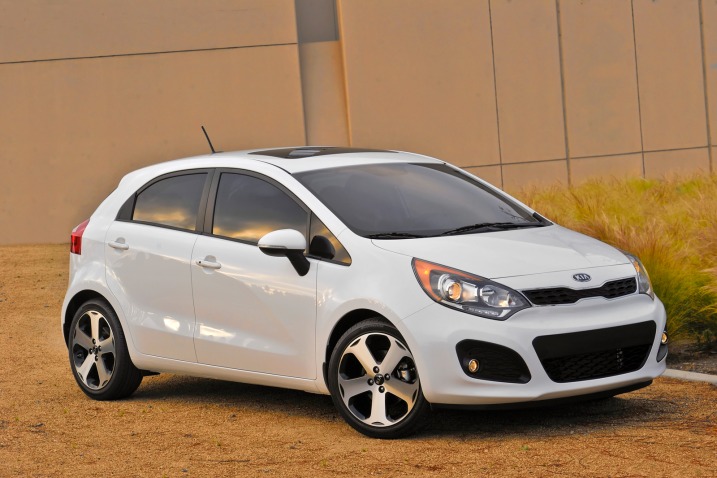 The 2012 Kia Rio is new from the ground up, and is available in both sedan and Rio5 hatchback models. The Rio and Rio5 ride on a platform that is longer, wider and lower than the outgoing model, with an extended wheelbase (101.2 inches) that offers 40 inches of front headroom, 37.8 inches of rear headroom, 43.3 inches of front legroom and 31.1 inches of rear legroom.

Under the hood is a new 1.6-liter four-cylinder engine with direct-injection technology paired with a six-speed manual or six-speed automatic transmission. It also features optional ISG technology, which is new to the Rio. The fuel-saving technology turns the engine off when the car is not in motion and restarts automatically when the driver releases the brake pedal. The EPA rates the new Rio at 7,85/5,88 L/100km city/highway. 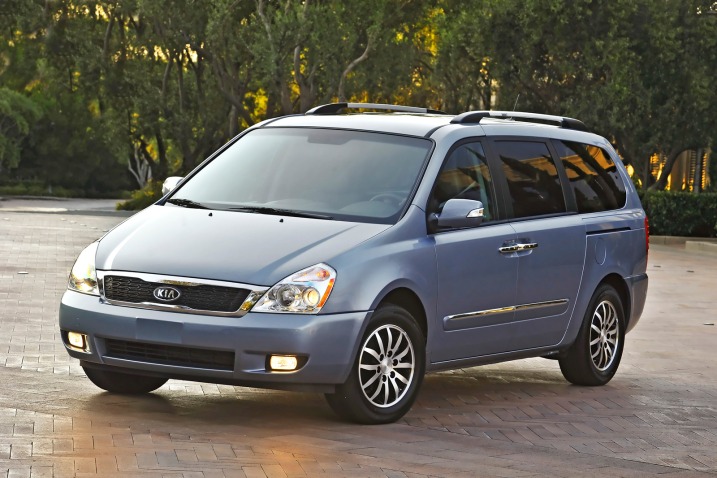 The formidable Kia minivan soldiers on with few changes for 2012. Its electrochromatic mirror has been updated, and the rear-seat entertainment system is now available on the entry-level LX trim as well as the uplevel EX. New silver and beige exterior paints complete the improvements. 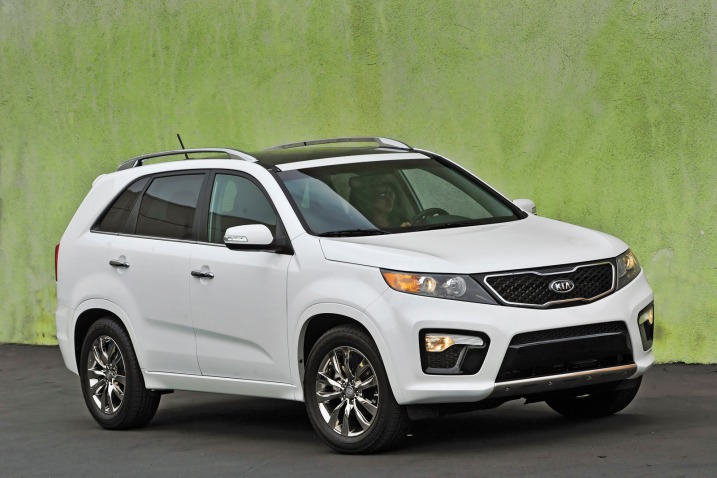 Kia's Sorento crossover was all-new for 2011, so there's not much in the way of big news for 2012. There is, however, good news for entry-level Sorento buyers, as a new direct-injection 2.4-liter GDI rated at 191 horsepower and 181 pound-feet of torque is now available, earning EPA ratings of 10,69/7,35 city/highway L/100km  in the front-wheel-drive Sorento.

Changes to the 2012 Sorento's exterior include the addition of available power-folding side mirrors, a chrome dual pipe/muffler exhaust (for the GDI four-cylinder only), a new five-spoke hyper-finish wheel design on the Sorento EX and a stainless step pad on the top-of-the-line SX. Inside, new YES-Essentials seat treatment integrates anti-soiling, anti-static and antibacterial fabric properties to help keep the entire Sorento lineup clean and comfortable.

Rounding out the changes is a list of packaging shuffles. The Uvo in-car hands-free entertainment and communication system package is now standard on the EX, as is interior illumination. An available electrochromatic rearview mirror with compass is optional for the EX. A third-row seat was previously standard on the LX V6; now it's added to the options list. Back-up rear sonar is now optional on the LX and standard on EX/SX (it was previously not available on SX). A memory driver seat with cooling and ventilation is now optional on the EX and standard on the SX, as is a four-way power passenger seat. Finally, a standard heated and wood trim steering wheel, upgraded A-pillar cloth trim and revised interior trim add even more style to the SX. 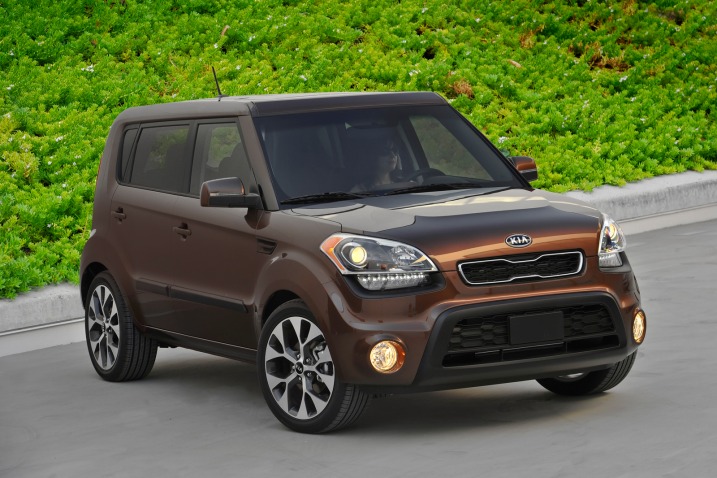 Just two years into production, the Kia Soul gets a modest midcycle freshening for 2012, along with a new 135-hp 1.6-liter four-cylinder GDI engine linked to a six-speed manual transmission designed to boost fuel economy. The new 1.6-liter GDI engine returns 8,71 L/100km  in city driving and 6,72 L/100km on the highway.

The 2012 Soul gets an optional 160-hp 2.0-liter four-cylinder engine linked to either the six-speed manual transmission or a six-speed automatic transmission. Linked to either transmission, the Soul 2.0 is rated at 9,04 L/100km in city driving and 6,92 L/100km on the highway. The revised Soul also benefits from electric power steering (vs. hydraulic), Vehicle Stability Management (VSM) and Hill-Start Assist Control (HAC).

Notable interior updates include a revised center stack and gearshift design, a telescoping steering wheel, illuminated sun visor vanity mirrors and an illuminated glovebox. Kia's Uvo system with HD radio in-car hands-free entertainment and communication system package is available, as is a navigation system with Sirius/XM Traffic. An Infinity premium audio system will be available on uplevel Soul models for 2012. 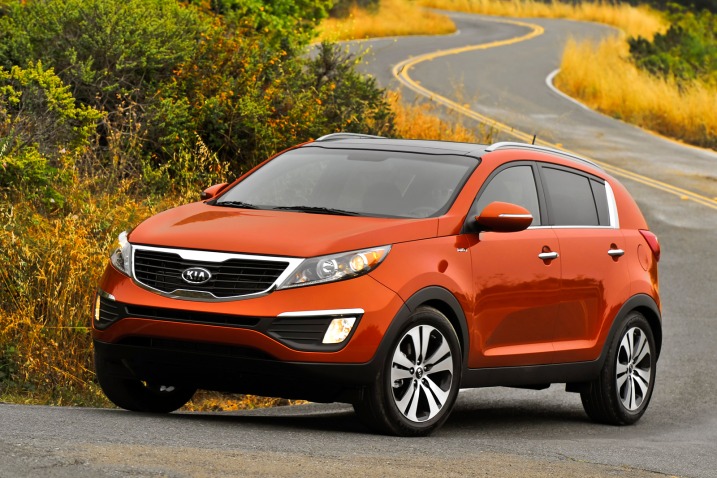 Kia's Sportage compact crossover SUV got a complete makeover for the 2011 model year, but the Sport SX turbo was a little late to the party, and didn't officially debut until March 2011. Therefore its credentials bear repeating: The Sportage SX gets Kia's 256-hp 2.0-liter turbo GDI four-cylinder engine linked to a six-speed automatic transmission. The new setup is rated at 10,69/8,11 city/highway L/100km  for the front-wheel-drive model and 11,2/9,05 L/100km for the all-wheel-drive Sportage.

New for 2012, Kia added rear suspension dynamic dampers and increased floor insulation to the Sportage for improved NVH performance, and added standard high-performance dampers to the EX model. Seventeen-inch alloy wheels and low-rolling-resistance tires have been made standard equipment on the low-level Sportage LX.

Kia's Uvo in-car hands-free entertainment and communication system package is standard on the EX and SX trims, but is deleted when the navigation option is chosen. A new seat treatment integrates anti-soiling, anti-static and antibacterial fabric properties and comes standard on the EX with cloth upholstery, and a folding key now comes standard with keyless-entry-equipped Sportages.