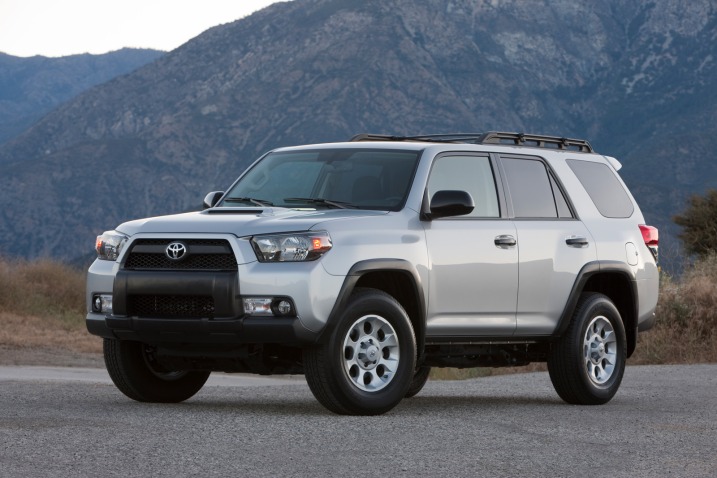 Now in its third year since the 2010 overhaul, the 4Runner only gets a few small changes for 2012. After giving it the ol' college try for a couple of years, Toyota has decided to drop the base four-cylinder engine. Turns out, people want a sturdy V6 to go with their sturdy SUV. They also seem to want good stereos, as Toyota upgraded the SR5 and Trail grade models with standard Sirius radio, Bluetooth and a USB port with iPod connectivity. Limited models get Toyota's new Entune mobile technology interface as standard equipment with a JBL audio-navigation system an option. The Entune setup is optional on the SR5 and Trail models. And last, and most certainly least, SR5 and Limited trim 4Runners will be available with power-retractable running boards.

In anticipation of a full redesign next year, the 2012 Avalon is carried over with few changes this year. If you must know, a cargo net is no longer standard and the in-cabin air filter has been reformulated to trap minute dust particles instead of its previous concentration on keeping out pollen.

Largely untouched since 2007, the full redesign of the 2012 Camry is a big deal for Toyota. This time around, the designers went with a more aggressive exterior style while retaining the previous car's overall dimensions. The drivetrain is all carryover, so there's still a 2.5-liter, four-cylinder base engine and an optional 3.5-liter 268-horsepower V6. Unlike the year before, all four-cylinder Camrys will be rated at 178 hp instead of just the SE version. Not that anyone is likely to notice, but there's no longer a manual transmission offered. This means all 2012 Camrys come standard with a six-speed automatic transmission. The sporty SE models even get steering-wheel-mounted paddle shifters along with retuned suspensions and larger wheels and tires. All Camrys have switched to electric power steering for improved efficiency. Toyota says both the four-cylinder and V6 models will get 2 additional mpg in combined city/highway driving. New interior features include Toyota's Entune mobile technology interface, remote vehicle starting and a JBL audio system that Toyota says is greener than any other stereo around.

Like the standard model, the 2012 Toyota Camry Hybrid gets all-new styling inside and out. It retains the understated blue badging of the previous model, so it's still more of a technology piece than a statement car like the Prius. There's more technology, too, as Toyota worked hard to bump the hybrid's fuel economy numbers. A new 2.5-liter Atkinson-cycle engine replaces the older 2.4-liter non-Atkinson setup while the regenerative braking system delivers more power back to the batteries. The result is a total of 200 hp (up from 187) and a claimed 40 mpg in combined city/highway driving, a whopping 7 mpg improvement over the previous model. 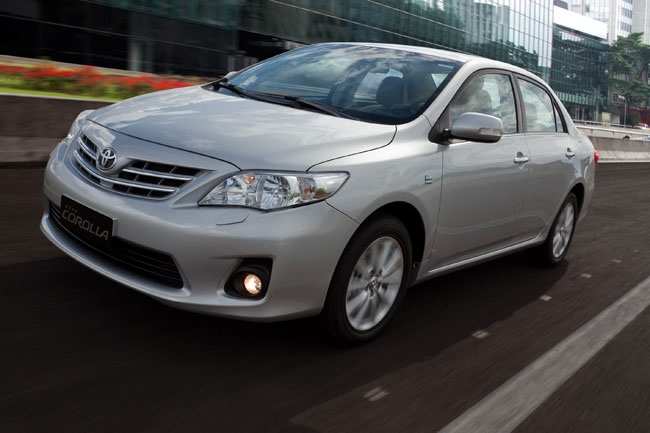 There's not much news for the Corolla this year. On the outside, the Corolla LE now rolls on 16-inch steel wheels, while the L model gets color-keyed power side mirrors. The interior upgrades for this year are equally exciting. The LE and SE models now feature upgraded audio systems with six speakers, satellite radio, an auxiliary jack, USB port with iPod connectivity, steering wheel audio controls and Bluetooth connectivity. And finally, double-stitch seat accents are now standard on the Corolla S. 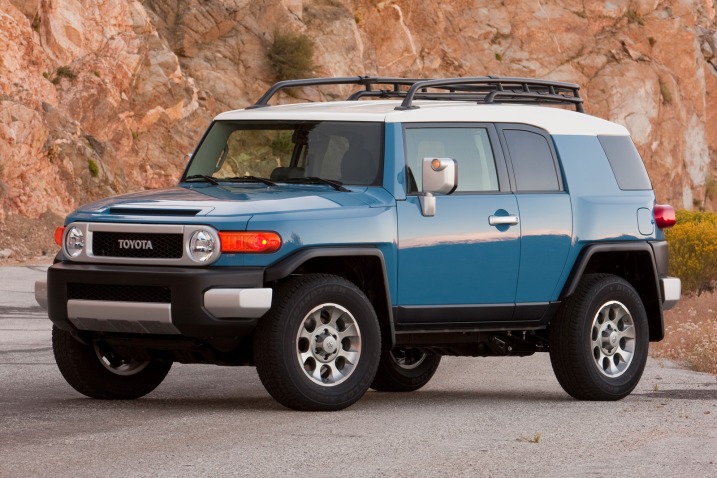 There is only one difference between the 2012 FJ Cruiser and last year's model; Brick Red is no longer available on the Trail Teams Special Edition model. It has been replaced by Radiant Red. That is all.

There are no changes to the 2012 Toyota Highlander.

Like its gas-only brother, the 2012 Toyota Highlander Hybrid rolls into this year with no upgrades.

As the full-size SUV market continues to wane, Toyota decides to leave the Land Cruiser alone. There are no changes for 2012.

After its Pontiac counterpart got killed off, we expected the Matrix to suffer the same fate. But they like it in Canada and that's where it's built these days, so it remains in the lineup for another year, unchanged from 2011.

The Prius received a minor update this year to keep it fresh in the face of newer competition. The headlights and taillights have been revised, along with a new grille and lower front fascia. Prius Two models get a new wheel design and standard daytime running lights, while the Prius Three gets a standard SmartKey and the Prius Four gets automatic headlights. On the color front, Blue Ribbon Metallic replaces Nautical Blue Metallic, while Sea Glass Pearl has been added and Sandy Beach Metallic dropped. Interior changes include upgraded audio systems on Prius Two, Three and Four models, the inclusion of Toyota's new Entune mobile technology interface being the most notable upgrade. The Prius Four also gets an eight-way power driver seat, but sadly, the Plasmacluster Ionizer and water-repellent front side glass has been discontinued. Those who can't parallel-park will also be frightened to learn that the Advanced Parking Guidance System has been deleted from the Prius Five Advanced Technology package.

The first spin-off of the Prius line, the Prius V basically takes the standard model and stretches it 6 inches to open up an extra 12.7 cubic feet of cargo space under the hatch. It's slightly wider, too, and the rear seats recline so it feels more spacious for passengers in the second row. The extra size adds about 230 pounds to the curb weight of the Prius V, so Toyota swapped in a lower rear-end gear to help keep its performance on par with the standard hatchback. Everything else is mechanically identical between the two Prius models.

The only significant change for the 2012 Toyota RAV4 is the availability of the new Entune mobile technology interface. It will be offered as part of the Extra Value package on Sport and Limited models.

Toyota's truck-based, full-size SUV soldiers on for another year with a few minor upgrades. A Trailer Sway Control system is now standard on all models along with a black upper instrument panel and black interior carpet. Platinum grade models also get a standard blind-spot warning system. On the color palette, Cassis Pearl has been replaced by Sizzling Crimson Mica.

After a full redesign last year, the 2012 Toyota Sienna gets a handful of minor interior upgrades this year. A power passenger seat is now standard on the XLE model, along with automatic headlights. On SE models, the rear entertainment system is now packaged with a sunroof. Toyota's new Blue Harmony radio interface will also be offered as an option on LE, SE and XLE trim levels. 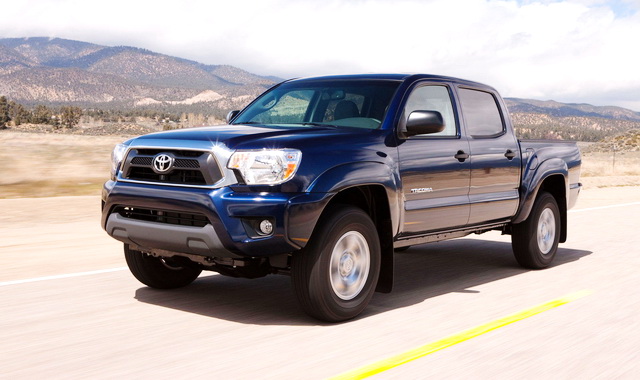 As the compact truck market limps along, Toyota decided to give the Tacoma another minor cosmetic update (the last one was in 2009 and the last redesign was in 2005). This time all Tacomas get a new hood, lights, front bumper and grille, along with a new instrument cluster and center stack. The choice of audio systems now includes Toyota's Entune system on V6 Double Cabs, while Access cabs only get a single-CD player with satellite radio and six speakers. On Tacomas with the optional back-up camera, the screen size has been increased from 2.4 to 3.3 inches. Heavy-duty flooring is now optional on all Access and Double Cab models, while all models get sun visor vanity lights and a new overhead storage compartment. The TRD Sport package now includes turn signals in the side mirrors and optional 18-inch chrome wheels. The color palette has been updated with Spruce Mica and Nautical Blue Metallic in place of Timberland Green and Speedway Blue.

The Tundra is essentially a carryover model this year, but since full-size trucks have so many features and options there are still a few minor changes. All trim levels now come standard with styled steel wheels, a black upper instrument panel, black carpet, heated mirrors, daytime running lights and a Cold Weather package. The Tow package is now a stand-alone option and is not bundled with other packages. Speaking of packages, there are now four major ones: Convenience, Convenience with bucket seats, Upgrade and SR5 — in addition to the smaller Chrome, TRD Off-Road and Rock Warrior packages. The Chrome package is available on Double Cab and Crewmax models and includes chrome exhaust tips, side mirrors, door handles and 18-inch wheels. A back-up camera is now part of the Rock Warrior package, while Limited-grade Tundras get it as standard equipment. And finally, Super White paint can be ordered on Platinum-grade Tundras.

Mechanically and cosmetically, the 2012 Toyota Venza is a direct carryover from the previous year. The only real difference for 2012 is the introduction of new LE, XLE and Limited trim levels. The LE and XLE options are available on both four-cylinder and V6 models, while the Limited is reserved for V6 models only. Previously, the Venza's options were determined by which engine you chose.

Now that people seem to care about small cars, Toyota figured it was a good time to give the Yaris a redesign. Although it looks similar to the old model, the 2012 Yaris rides on a 2-inch-longer wheelbase and is nearly 3 inches longer overall. The suspension is still a basic MacPherson strut setup in front and torsion beam design in back, but Toyota added a thicker front sway bar and 15-inch wheels and tires as standard. The "sporty" SE models get 16-inch wheels and tires, along with quicker steering and four-wheel disc brakes. The engine and transmissions carry over unchanged, so the Yaris is still powered by a 106-hp four-cylinder and either a five-speed manual or four-speed automatic. The most notable change to the interior is the relocation of the instrument panel to the area in front of the driver where it belongs. There are now three trim levels — L, LE and SE — and two body styles: a three-door hatchback and a five-door hatchback. The sedan has been discontinued.